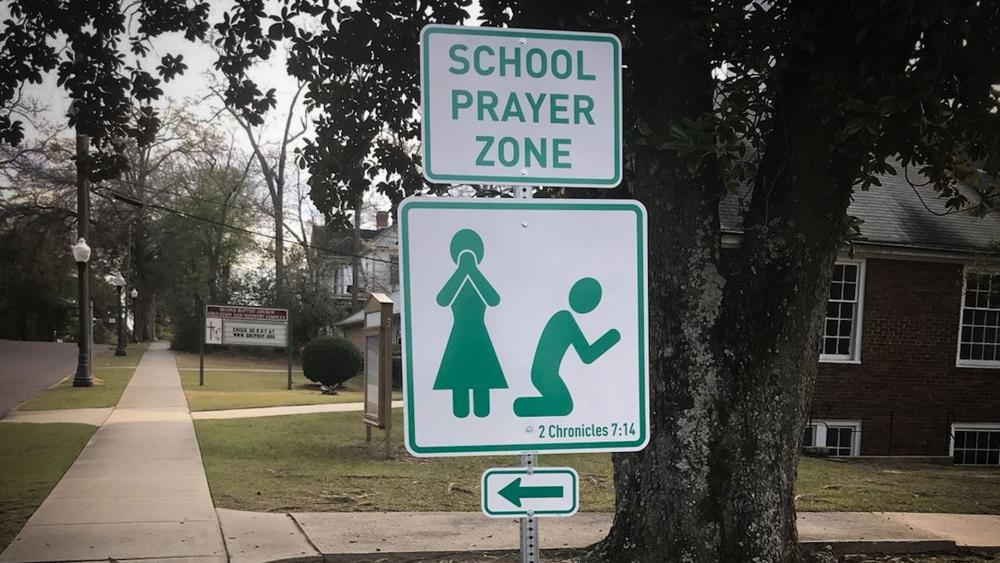 A different kind of road sign with a different kind of message will be greeting students and parents on their way to school for the new year in Richland County, South Carolina. WIS-TV Channel 10 in Columbia, SC reports the signs say "School Prayer Zone," show stick figures of a man and woman praying, and include a Scripture notation for Second Chronicles 7:14. That verse calls on God's people to pray, repent, and seek God for the healing of their land.

The signs are the brainchild of Vanessa Frazier, founder/director of Christ Teens, a Columbia non-profit outreach to young students and teachers in the area. Frazier told CBN News that the mission to reach young people for Christ was born years ago as she worked behind the attendance desk in a local high school. As for the signs, she spent three years developing them with the SC Department of Transportation, and she's hopeful they'll encourage people to pray for students and teachers, and in her words, "create a wall of prayer around the schools."

For those concerned about church/state issues, The South Carolina Department of Transportation (SCDOT) says the signs, which look quite official, are placed on private church properties located near schools and are outside the highway rights of way. WIS reports the agency says the signs are legal, and Frazier agreed. "This is a perfect example of church and state. We're staying out of the area of the state but we're bringing it on the land of the church."

Why encourage prayer?  For Frazier, the idea of signs pointing people to prayer came out of her own prayer life as she asked God for ways to help kids in public schools today. She refers to the Bible where God uses various kinds of signs to emphasize His promise to help His people. For example, the rainbow was a sign of God's covenant to bless the earth and to never judge it again with a flood. With the struggles and special challenges facing young people today, she says, prayer is the only way to touch and change hearts. And she believes it's a key to success in life. "We want this next generation coming out of our public schools every 365 days to be productive citizens with wisdom, understanding, knowledge, skills, and ability. You know, everything you would want from a graduation class," she told WIS.

Jane Jorgenson is the wife of Daniel, the pastor of St. Mark's Lutheran Church in Blythewood, SC, which is located a short distance from Blythewood High School. She told CBN News that when Vanessa Frazier approached them earlier this year about purchasing a School Prayer Zone sign and placing it on their church's property, she knew she wanted to do so immediately. "Literally on the spot I said, we're interested."

Jorgenson reports there's been a lot of positive feedback from the sign, and everyone seems to be noticing, from her server at lunch to the women in her own prayer group. And she told CBN News she hopes the emphasis on prayer will bring meaning and peace to students' lives that may be troubled. "God brings peace to hearts and lives if we ask. If high school kids see this sign as they go to school, if they could get into the habit of praying for their problems, it could help them get through the day. God is all-powerful. Why not bring Him into the situation?"

Vanessa Frazier sees herself as a servant to the public schools and is working with other states to see if their laws allow such School Prayer Zone signs in their communities. She's heard from people from Florida to California who are interested, and her Facebook page has received more than 200,000 "Likes" since the word got out about the signs. In her own community, eight to ten signs have gone up in Richland and Aiken counties.

Frazier's ultimate goal is to make a long-term difference in the public schools, as stated on her website: "to build an earthly army of soldiers who talk and walk with the Lord of the Harvest, Jesus Christ, on the grounds of public schools-all within the law." School Prayer Zone signs to encourage the community to pray are just the beginning.