So Much Love for 'the Mighty Quinn': Window Becomes Precious Lifeline for Boy Battling Brain Cancer 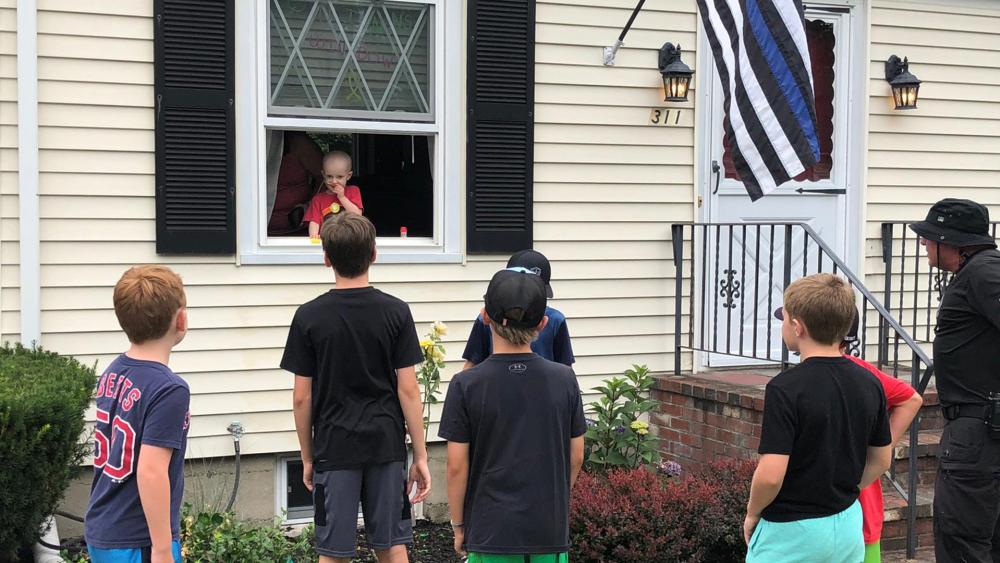 A community in Massachusetts is cheering, dancing and singing songs in an effort to boost the spirits of a home-bound boy suffering from cancer.

In February, three-year-old Quinn Waters was diagnosed with Medulloblastoma – a cancerous brain tumor. He has gone through numerous rounds of chemotherapy, months of hospitalizations, and a stem cell transplant.

The high doses of chemotherapy have affected Quinn's immune system and he is unable to play outside. But a window, or "Quinn-dow", in his home has become his lifeline to the world, where he can play and see children and just be a child.

He's also been given the nickname, 'The Mighty Quinn' for his bravery while battling brain cancer.

Quinn's mother, Tara Waters, is a police officer with the Quincy Police Department. Dozens of officers shaved their heads in April to raise money and support Quinn. The event surpassed its $5,000 goal and raised more than $27,000.

Friends and strangers have stopped by the window and performed different tricks to entertain Quinn. Cars also drive by and honk their horns to show support for Mighty Quinn's courage.

"It's good that he can socialize and stay a little 'normal' through the window. His phrase is 'this is the best day ever' which he repeats multiple times every day," Tara said.

"He doesn't ask to go outside or get mad he can't, he doesn't pity himself, he has the best outlook on life and laughs and plays until bedtime. Out of a terrible disease comes some good in the world and Quinn has had experiences some kids never have," she added.

Quinn will see doctors in the fall to determine if he is cancer-free.

"He's doing so well that I think the boost of positivity is keeping him going," Tara said.