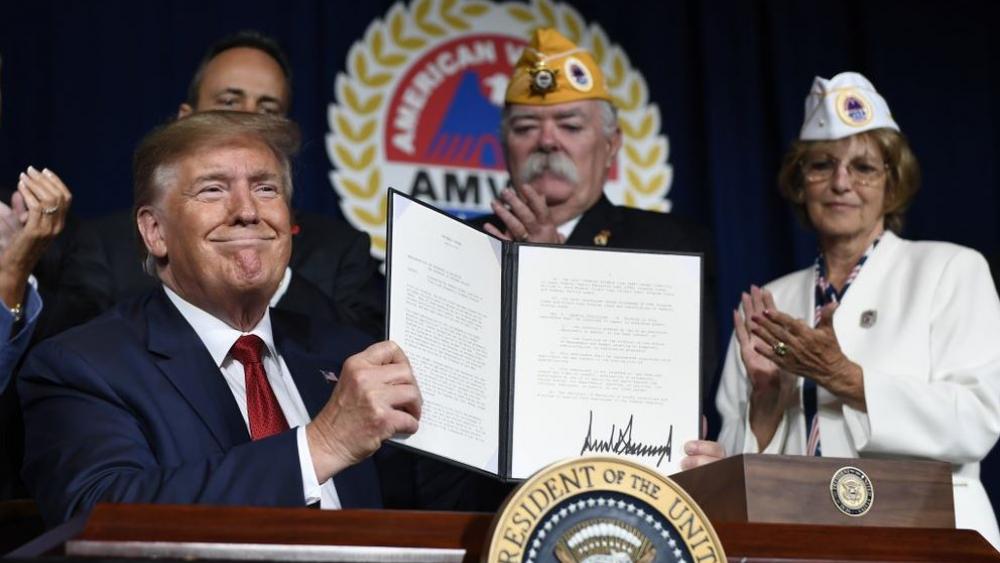 LOUISVILLE, Ky. (AP) — Hundreds of millions of dollars in federal student loan debt owed by tens of thousands of disabled military veterans will be erased under a directive President Donald Trump signed Wednesday.

Trump ordered the Education Department to “eliminate every penny of federal student loan debt” owed by American veterans who are completely and permanently disabled.

Trump said they won’t have to pay federal income tax on the forgiven debt and called on states to waive their taxes on the loans, too.

America, he said, owes its heroes “a supreme debt of gratitude.”

Trump’s announcement at the AMVETS national convention in Louisville elicited a loud round of applause from the crowd of more than 2,500 veterans. He signed the directive after addressing the gathering.

Only about half of the roughly 50,000 disabled veterans who qualify to have their federal student loan debt forgiven have received the benefit, and the administration blames a “burdensome” application process.

The document directs the government to develop an expedited process so veterans can have the debt discharged “with minimal burdens.”

The action will wipe out an average of $30,000 in debt owed by more than 25,000 eligible veterans, Trump said, calling them “incredible people” who have made “the ultimate sacrifice, in many ways, for our nation.”

Trump also used his appearance to highlight steps the administration has taken to bolster the military, including increased spending and new equipment. He also discussed the administration’s commitment to veterans, including helping them access health care, reducing opioid addiction and minimizing suicide among those no longer in uniform.

Trump said the administration is “determined to do everything in our power” to end suicide among veterans. About 20 veterans end their lives every day.

He said the drug quells “whatever causes somebody to be so desperate to commit suicide.” He said he had instructed his administration to get as much of the drug as possible from the New Jersey-based consumer products company.

Trump said Johnson & Johnson has done so well and “made so much money” that they “should give it to us for free.”

Johnson & Johnson said in a statement that it is having discussions with the Department of Veterans Affairs and other payers to ensure “affordable access” to Spravato for its use in patients with treatment-resistant depression. The drug is sold to the federal government at discounted prices, the company said.

After the speech, Trump went to a nearby hotel to headline a fundraiser for Republican Gov. Matt Bevin, who is seeking reelection against Democratic state Attorney General Andy Beshear in what’s shaping up to be a close November election.

Bevin, who plays up his ties to Trump in pitching for a second term, quickly boarded Air Force One after it landed in Louisville so he could be photographed accompanying Trump off the presidential aircraft.

Trump recently promised to hold a campaign rally for Bevin and said Wednesday that Bevin “has been a truly great governor.” Trump’s reelection campaign has not announced a date for a Kentucky rally.

McConnell is seeking reelection next year to a seventh Senate term and is facing a stiff challenge from Democrat Amy McGrath.

Trump said he’d return to Kentucky to bolster both candidates.