The Bizarre 1919 Catastrophe You Never Learned About in History Class 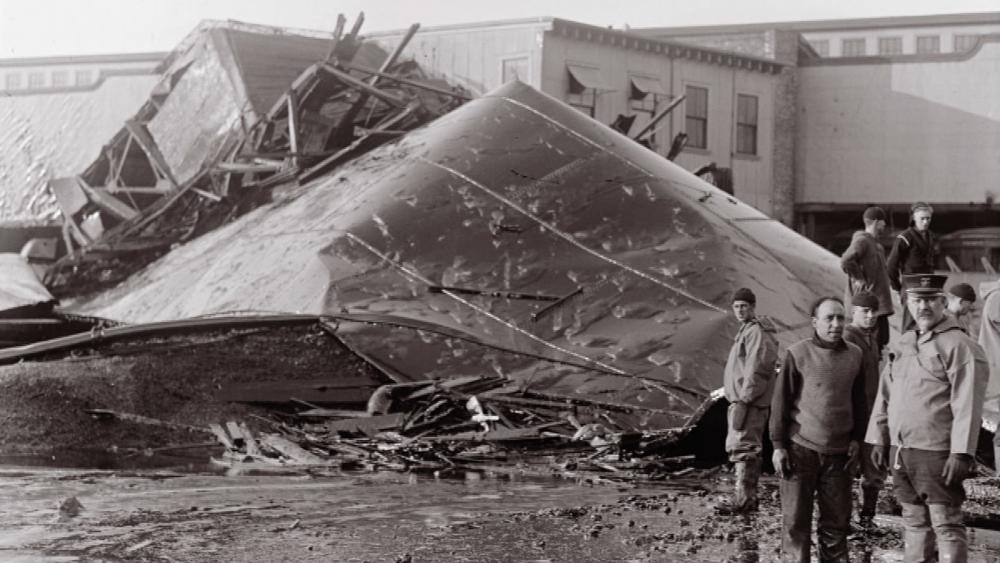 The Bizarre 1919 Catastrophe You Never Learned About in History Class

Paul Revere made Boston's North End famous when he began his historic midnight ride from there in 1775. Over time, it became a melting pot of Italian American culture. But history has mostly forgotten another extraordinary event that happened on those streets one hundred years ago.

A Tidal Wave of Molasses

January 15, 1919. A 50-foot tall tank collapses on the Boston waterfront, unleashing a massive tidal wave. "It absolutely picks up everything in its midst," says historian Stephen Puleo.  "A messenger with about a four-ton truck is delivering produce, and it gets picked up, and swept right into Boston Harbor."

Twenty-one people died as a result of the disaster, including two children. What takes this story from the tragic to the bizarre is the contents of the tank – 2.3 million gallons of molasses. As it turns out, molasses was originally a part of the economy that Bostonians would just as soon forget.

"Boston and the Northeast were heavily involved in the slave trade, the so-called triangle trade," explains Puleo. Ships sailed from Boston to West Africa, exchanging rum for slaves. Next stop, the West Indies, where the slaves were traded for molasses, which was then distilled into rum back in Boston as part of a continuing cycle.

In the Rush to Build, Quality Suffers

Fast forward to 1914 and World War I when demand for molasses reaches an all-time high. By then, companies were converting molasses into industrial alcohol – a key component in manufacturing weapons.

By the time Jell locks in a location, he has only two months before the first large shipment of molasses is due to arrive. In the rush to finish the project, quality suffers.

"The tank begins to leak almost from the beginning," Puleo describes. "So much so that children from the North End would go down to the site and scoop up molasses with their pails, and bring them home." He continues, "At one point, Arthur P. Jell has the tank painted the color of molasses, to disguise those leaks."

After the war ends in November 1918, as the likelihood of Prohibition approaches, the company switches gears to produce as much rum as possible before the 18th Amendment goes into effect.

"When he hears what he describes as this tremendous rumbling, grinding sound, and the rat-tat-tat of what he feels is like machine gun bullets," says Puleo. "He turns around, and he sees this tank disintegrating before his eyes, the rat-tat-tat are the rivets, thousands of rivets in the tank pulling away."

The 160-foot wide wave of molasses travels at a speed of 35 miles per hour, leveling off to a height of 25 feet. It crushes everything in its path, tearing a firehouse from its foundation, completely collapsing the first floor. The waterfront is unrecognizable.

Although a criminal inquest finds USIA responsible for the catastrophe, a grand jury files no charges. The only hope for justice for the victims is a civil suit.

"It really is a David vs. Goliath kind of situation; United States Industrial Alcohol is a large industrial corporation," explains Puleo. "Up against them are these 119 plaintiffs who are almost exclusively Irish city workers, who work for the city of Boston; or Italian immigrants who worked in and around the docks."

The Massachusetts Superior Court assigns one of Boston's most well-known lawyers to oversee the case: Lieutenant Colonel Hugh Ogden. The son of an Episcopalian minister, Ogden left a lucrative law practice at age 45 to enlist in the Army.

The war profoundly changed Ogden, who would later write of his fellow soldiers, "They did not give their lives to the great might have further privilege to oppress the small."

The hearings take three long years, in part because Ogden insists each victim be heard. In a decision that changes the course of history, he finds United States Industrial Alcohol liable.

"Almost everything we take for granted today, in the building construction industry – that architects need to show their work, engineers need to sign and seal their plans, building inspectors need to come out and inspect projects – almost every single one of those comes about as a direct result of the Great Boston Molasses Flood case," says Puleo.

It has been said that God uses ordinary people to carry out his extraordinary plans. Such is the case with Hugh Ogden. Although his name has been lost to history, his legacy is undeniable.

*This story was originally published on January 15, 2019.