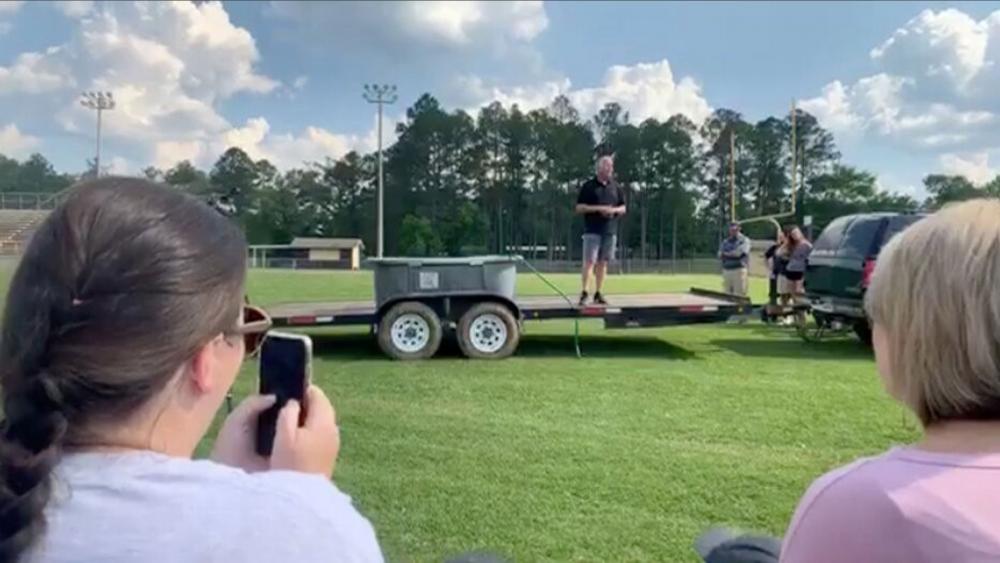 Last month the Freedom From Religion Foundation filed a complaint against a school district for allowing the high school football coach to baptize his players on school property.

FAITHWIRE  ‘If You Don’t Like It, Close Your Eyes’: Atheist Group Gets Slapped Down After Trying to Remove Crosses From Courthouse

After a video was shared to Facebook last month, the atheist organization sent a letter to the Alabama school district Superintendent John Dickey, asking him to take action against the football coach.

In the video, the pastor who led the baptism said: “None of this would be going on without head coach Devin Roberts,” but it is unclear if coach Roberts was there.

“Now, Devin Roberts is not normal— this is not going on all over the United States. I’ve see it in a few places and it’s pretty neat but Coach Devon Roberts is not only the kind of guy that loves his players for how well they do in the weight room and on the field… but he’s also concerned about their hearts.”

After finding the video, the FRFF sent a letter to the Washington County Schools Superintendent John Dickey demanding that action be taken against the coach.

What Did the Letter Say?

In their letter to the school district, the foundation argued that the head football coach baptized “several football players” on school property, which is “inappropriate.”

“It is inappropriate for a public school district to proselytize students by organizing a team baptism,” the letter read. “It is equally inappropriate and unconstitutional for coaches to have participated, even if students or the [Fellowship of Christian Athletes] organized the baptism.”

Christopher Line, the legal fellow at FRFF who penned the letter argued that the baptisms were a “constitutional violation,” and called everyone’s participation inappropriate.

“It is also illegal for coaches to organize or participate in religious activities with students, including baptisms,” the letter continued. “Nor can coaches allow religious leaders unique access to students during school-sponsored activities.”

Line further argued that because of the time of the baptisms, one might perceive that they were endorsed by their schools, which, as he put it, is wrong.

“When baptisms take place directly before or after a team football practice, on school property, with coaches’ participation or leadership, any reasonable student would perceive these activities to be unequivocally endorsed by their school.”

He concluded his letter by calling the baptisms "especially problematic in the context of athletics, given the pressure players feel to conform to coaches’ expectations so as not to disappoint coaches or hurt their standing on the team."

FRFF concluded their letter by requesting that the district would complete an internal investigation to make sure “no further illegal religious events, including team baptisms” would happen again.

Although the Freedom From Religion Foundation is suggesting an internal investigation to take place regarding the baptisms, many on social media have commended the players for making the decision to be baptized.

Shane Breland commented on the video: “Bailey Thomas Hill, way to let God use y’all with those students. Wow…. God is great and working in Chatom. God be with each of those students and help them grow in their walk with you.”

Cindy Chesser wrote: “This really touched my heart! Praise God for these obedient witnesses for Christ. Love you Chris and I know you are thrilled to be a part of this!”

Who is the Freedom From Religion Foundation?

The Freedom From Religion Foundation “works as an umbrella for those who are free from religion and are committed to the cherished principle of separation of state and church,” as their website describes.

They operate as a watchdog group that keeps their eyes out for any type of organization that they think is breaching the separation of church and state.

Most recently, FFRF tried to remove crosses from the San Jacinto County Courthouse in Texas, by demanding their removal. As previously reported by Faithwire, the County Commissioners Court voted unanimously to keep the crosses at the courthouse, throwing out FFRF’s claims.

This past fall FFRF filed a complaint with a school district after a video went viral of the teams “character coach” saying a prayer before a football game. The Georgia district fired the pastor, but it did not stop the team from praying.

Despite the watchdog groups attempt to stop the prayer in the locker room, the team continued to pray before games according to the Dawson County News.

In 2017, the FFRF demanded that an Alabama high school cease their loudspeaker prayers before football games, to which the school complied. Much like the other instances, the students ended up continuing to pray in the grandstands.