'God, Give Him Wisdom': President Trump Gets Prayed Over at DC Church 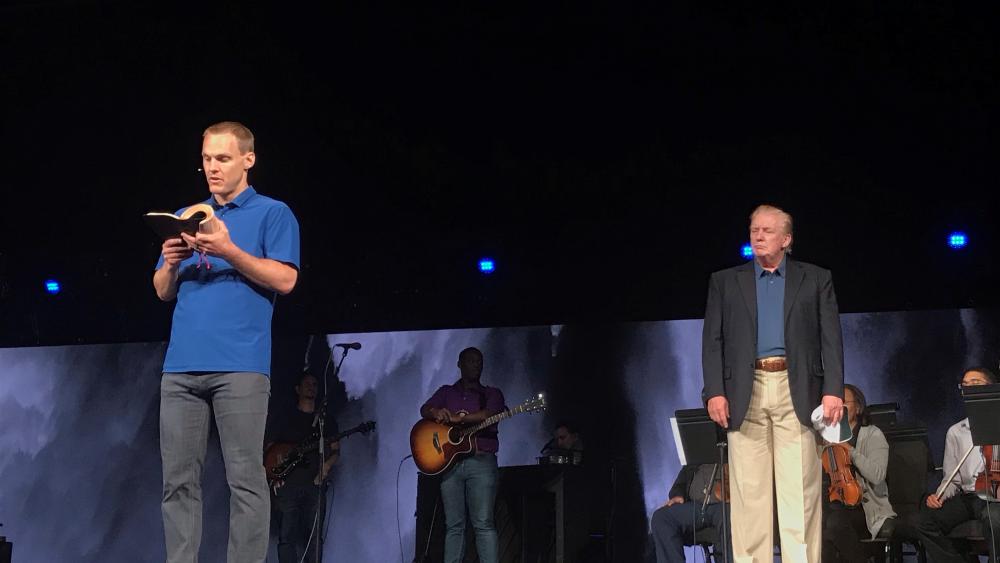 President Donald Trump visits the McLean Bible Church to pray for the victims and for the community of Virginia Beach. (Image credit: White House Pool)

President Donald Trump made a brief stop at the McLean Bible Church Sunday afternoon on a day which Franklin Graham and 250 other Christian leaders had declared to be a day of prayer for the president.

The presidential motorcade arrived at the church in Vienna, Va. and Trump entered the building, where a musical worship performance was taking place.

Trump stood on the stage behind Pastor David Platt. He was wearing khakis and a jacket over a polo shirt and holding a golf hat. The crowd greeted him with applause.

The pastor noted there had been calls to pray for the president on this day and offered a prayer for him.

Platt began by acknowledging Jesus Christ as the only savior of the world. "There is one God and one savior, and it's you. Your name is Jesus and we exalt you, Jesus. And we know we need your mercy, we need your grace, we need your help, we need your wisdom in our country," Platt prayed.

"Please, oh God, give him wisdom, and help him to lead our country," he continued, praying for all of America's leaders as well.

For those of you who pray, @realDonaldTrump briefly joined a Pastor David Platt at Mclean Bible Church (in suburban Virginia) today during an afternoon service after a round of golf. Platt prayed for him and other government leaders. Here's the prayer, transcribed from video: pic.twitter.com/cTirO9VB8L

Meanwhile, this weekend President Trump also offered a proclamation for the victims of the recent shooting and for the community of Virginia Beach, asking God to comfort their families.

On Saturday, President Trump ordered all US flags lowered to half-staff in honor of the Virginia Beach victims:

Our Nation grieves with those affected by the tragic shooting at the Virginia Beach Municipal Center in Virginia Beach, Virginia.  Americans unite in praying for God to comfort the injured and heal the wounded.  May God be with the victims and bring aid and comfort to their families and friends.  As a mark of solemn respect for the victims of the terrible act of violence perpetrated on May 31, 2019, by the authority vested in me as President of the United States by the Constitution and the laws of the United States of America, I hereby order that the flag of the United States shall be flown at half-staff at the White House and upon all public buildings and grounds, at all military posts and naval stations, and on all naval vessels of the Federal Government in the District of Columbia and throughout the United States and its Territories and possessions until sunset, June 4, 2019.  I also direct that the flag shall be flown at half-staff for the same length of time at all United States embassies, legations, consular offices, and other facilities abroad, including all military facilities and naval vessels and stations.

IN WITNESS WHEREOF, I have hereunto set my hand this first day of June, in the year of our Lord two thousand nineteen, and of the Independence of the United States of America the two hundred forty-third.