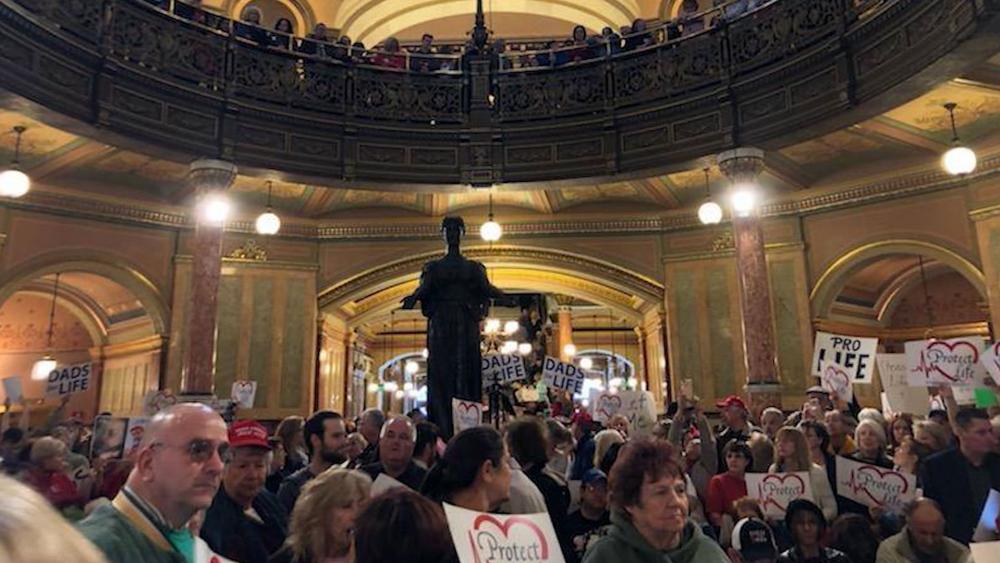 Thousands of protestors showed up in the Illinois state capitol in Springfield Wednesday to fight against what they're calling radical new abortion bills.

Similar to the New York abortion law that recently sent shockwaves across the nation, Illinois Democrats are pushing bills that increase access and provision for abortion. One bill allows abortions up until the moment of birth for any reason, and the other strips the requirement for minors to notify their parents.

"There is widespread outcry from the people of Illinois against these extreme anti-women and anti-children bills since they were introduced a month ago," Illinois Right to Life Action's Mary Kate Knorr said. "Residents from all corners of Illinois are expressing outrage at this proposed legislation, which disregards the health and safety of women."

The Daily Herald reports Democratic Gov. J.B. Pritzker has a plan to "make Illinois the most progressive state in the nation for access to reproductive health care." Pro-lifers fear that will actually happen.

Illinois is seen as a safe haven for those seeking abortions, especially since a new law allows the state Medicaid program to fund them. Researchers on both sides of the debate have found that when taxpayers fund abortion, the numbers go up.

"Essentially when the price of abortion goes down the incidence increases and if low-income women can get abortion subsidized through Medicaid programs they're more likely to get abortions," stated Dr. Michael New of Catholic University.

The Chicago Tribune reports 5,528 women traveled to Illinois last year alone from other states to have abortions. The number is almost a thousand more than the 4,543 women that traveled to the state in 2016. The total number of statewide abortions saw a similar increase from 2016 to 2017 where the number rose to 39,329 from 38,382.

The repeal of the Parent Notification of Abortion Act of 1995 could lead the annual number to increase even more. The bill, which passed out of a state Senate committee Tuesday, will allow minors to make hasty decisions without parental consent to get an abortion.

"This bill is not an anti-family bill, it is a pro-family bill," he said. "We cannot have and force inauthentic conversations between families. The state of Illinois has no place." But Democratic Chairwoman Patricia Van Pelt (D-Chicago) cut Republican legislators' concerns short to push the committee to vote on the bill. The final tally was 8-4, with the four objections coming from the Republican opponents.

The other bill, the Reproductive Health Act, would establish abortion as a fundamental right. The measure includes a mandatory rule for private insurance companies to cover abortion, and grant physician-assistants the opportunity to perform abortions.

Rep. Terri Bryant (R-Murphysboro) argues the bill has nothing to do with reproductive health. "I feel a little bit like I've fallen through the rabbit hole," stated Bryant. "Everything is upside-down, backwards and inside-out in just using the name."

Illinois Right to Life Action reports, "These bills would allow unregulated abortion up until the moment of birth for any reason, and would strip away all parental rights, along with any requirement of medical certification by staff or facility. If this legislation is enacted, Illinois would become a third-trimester abortion destination, and no abortion would be subject to state inspection. Since 2011, at least four abortion facilities have shut down because of failed state inspections."

The progressive measures have been introduced by Democrats in both chambers, but only the Senate is seeing success as the measure is stalled in the House.

This Born-Alive Abortion Survivor Is a Living Argument Against Infanticide
'Bring It!' Kentucky Gov. Vows to Fight as ACLU Tries to Block Pro-Life Laws that Ban Most Abortions
CBN News Email Updates