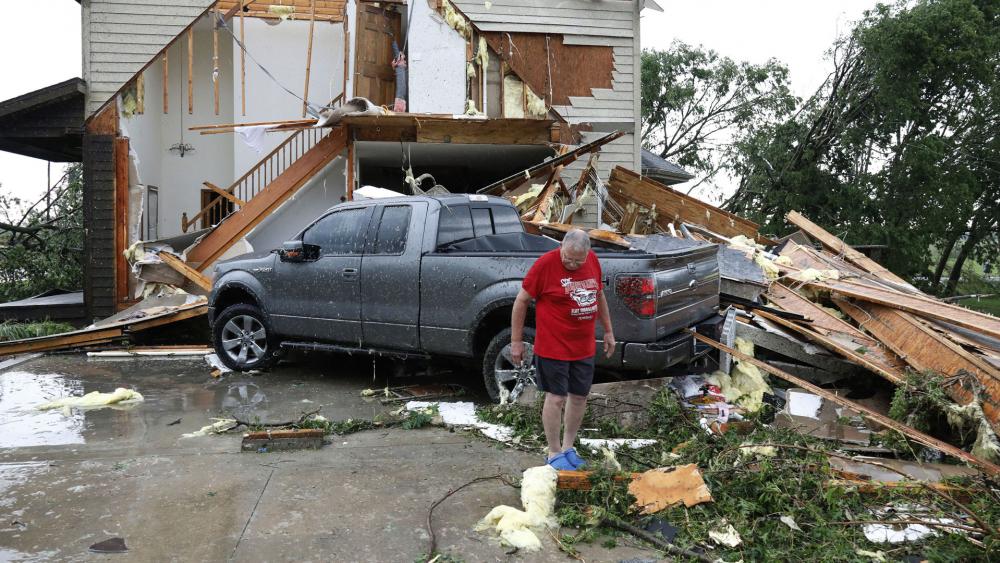 From Kansas to Pennsylvania, another round of tornadoes descended upon several states Tuesday afternoon and evening.

A tornado touched down in Lawrence, Kansas, devastating several neighborhoods and sending about a dozen people to the hospital. The twister was said to be a mile wide and stayed on the ground for about two hours.

Debris picked up on the airfield that caused our Operations staff to close the airport because Foreign Object Damage to aircraft can cause catastrophe. Pots, foam, wall panels, plant ID tags over millions of square feet. Presumed from tornado damage 47 miles away in Linwood, KS. pic.twitter.com/oOhYTs7F6H

Debris picked up on the airfield caused operations staff to close the airport so foreign object damage would not affect aircraft.

Residents in Morgantown are thanking God for protection during the tornado. WFMZ-TV reports resident Michele Kile saying, "We have severe window damage, roofs ripped off, trees on top of cars. No electric, no gas. No one was hurt, thank God."

This marks 11 straight days of multiple tornadic activity - a near record. Forecasters have recorded preliminary reports of 500 twisters in the last 30 days.

Meanwhile, amazing stories are emerging after each tornado strike. A twister that struck Dayton, Ohio on Memorial Day suddenly swerved from its path which could have been a direct hit on a children's hospital.

"Miraculously, I do not know how this happened, but we are grateful it went around Children's Hospital," Dayton Fire Chief Jeffrey Payne told the Dayton Daily News. "It amazes me. It was going in a trajectory straight for the hospital and went in a different direction before it got there."

The Dayton Daily News reports, "Given the extent of the tornado's devastation, officials said it's 'miraculous' no one was killed or seriously injured. The word 'miracle' surfaced time and again Tuesday."

'People Probably Who Normally Don't Pray Have Been Praying'

Meanwhile, Oklahoma is dealing with historic floods. Hundreds of homes have been evacuated west of Tulsa as heavy rains swelled the Arkansas River.

The New York Times reports that in Braggs, Oklahoma a small community has been surrounded by water and cut off from supplies, but residents are helping each other out, turning their boats into water taxis.

"We've got a lot of people praying in Braggs, and people probably who normally don't pray have been praying," said resident Pat Arney.

Officials fear it will only get worse as four more inches of rain could fall in coming days.

"The overall weather pattern that has been in place across the US will continue through midweek, which will bring more rounds of severe weather to the Plains. While large hail, damaging winds and flooding will be the main threats from these storms, the danger of tornadoes cannot be overstated,"  AccuWeather Meteorologist Brett Rathbun said.

Meanwhile, CBN's Operation Blessing is on the ground in the Dayton, Ohio area where 13 tornadoes were recorded Monday night.

Teams are assessing damage and setting up a base of operations for volunteers to help clean-up debris. Water is a huge need in the area.

OB's US Disaster Response, along with the Hunger Strike Force, is bringing a truckload of water, disaster relief kits, hygiene items and pre-packaged meals. Their mobile command center is also on its way, along with trucks carrying suplies and tools for volunteers.

You can help meet the needs of these tornado victims - click here to help Operation Blessing.