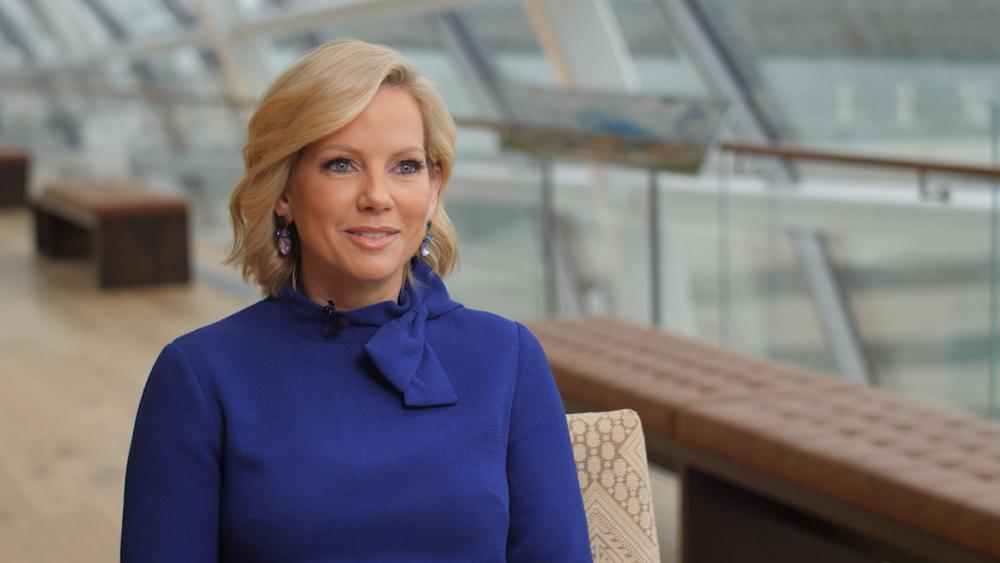 WASHINGTON – She's a bright and shining star on Fox News and in her first book, Finding the Bright Side, Shannon Bream opens up about her life, faith, and some of the ups and downs she's experienced along the way.

Just like many of her guests on Fox News @ Night, Shannon is consistently in the middle of the action with what many would call a dream job.

"I love what I do," she told CBN News. "It feels like a huge blessing and a gift."

Shannon sat down with CBN's Jenna Browder at the Museum of the Bible to talk about her book and how she got to where she is today.

She grew up in Florida going to church and Christian school, eventually choosing Liberty University for college. That's where she met her husband, Sheldon Bream.

While at Liberty, Shannon took the crown as Miss Virginia. She went on to law school at Florida State University and more pageantry, winning the Miss Florida title.

It was around this time Sheldon proposed but not long after their engagement, Shannon writes about what she calls, "The Darkest Cloud," when doctors diagnosed Sheldon with a brain tumor.

"To be 24 – and we were engaged and planning our life together – and to get those words, to get that news, it's totally out of left field and so unexpected," said Shannon.

The church was a huge support, from diagnosis and surgery to Sheldon's difficult recovery.

"We would get letters and notes or calls from people, from churches we'd never heard of, never visited, didn't know anyone there but they said, 'We heard about your story and we just wanted to let you know that we're praying for you,'" Shannon tearfully recalled. "As a Christian, it was just so overwhelming to know that there were people who were just the body of Christ that we would never meet."

Newly married and out of school, Shannon learned quickly law wasn't for her and started interning at a local news station.

"I eventually decided a few months into that I loved it so much – the police scanners and the breaking news and just the unpredictability of live television – that I decided to kind of take the leap."

The Road to Fox News

She eventually got hired at the CBS affiliate in Charlotte, North Carolina. After a short stint there, NBC in Washington, DC picked her up. It was at a speaking conference where she met Fox News' Britt Hume who offered her a job when he learned about her legal background.

It didn't take long for Shannon to begin moving up at Fox, filling in on the anchor desk and eventually getting her own show.

Excruciating Pain Made Her Feel Like Life Was Over

One major trial she's had to deal with is a painful disease that affects her eyes.

"Around my 40th birthday, I started to have extraordinary pain in my eyes and it was only happening overnight and I couldn't figure out what the source was of this but it would literally shoot me out of bed in enormous pain, doubled over," Shannon explained.

The excruciating pain went on for almost two years before a doctor was able to diagnose her, though he told her there would be no cure.

"I just sat there crying in my car and just saying to the Lord, 'This is it. This is the end for me. There's nothing else I can do,'" Shannon said. "And I explain in the book how I'm not someone whoever feels like I've audibly heard the voice of God but I felt in my spirit and I heard Him say to me in that moment, 'I will be with you.' Not, 'I'm going to heal you. I'm going to take this away. You're never going to have this pain again.' Just, 'I will be with you.' And I felt like that promise sustained me and I knew it was true. I knew His presence would be with me despite the fact that there was no cure."

With that same doctor, Shannon was able to manage the pain and eventually underwent surgery. Today she says her eyes aren't perfect but they're about "95 percent better."

The Decision to Remain Childless

One reoccurring question Shannon says she gets, especially in Christian circles, is about her decision to not have kids. She says she knew early on she didn't have what she calls "Mom Genes."

"The Lord creates us all in different ways and gives us all different passions and different paths," she said, adding that she has many young people in her life but feels her true calling is her career.

As for what's next, she's not sure but is keeping an open mind and heart.

"I try to say to myself, this is the season that the Lord has you here. Don't hold too tightly to it because you don't know what other adventures or things are coming down the line and I just try to be open to what the Lord may have next."