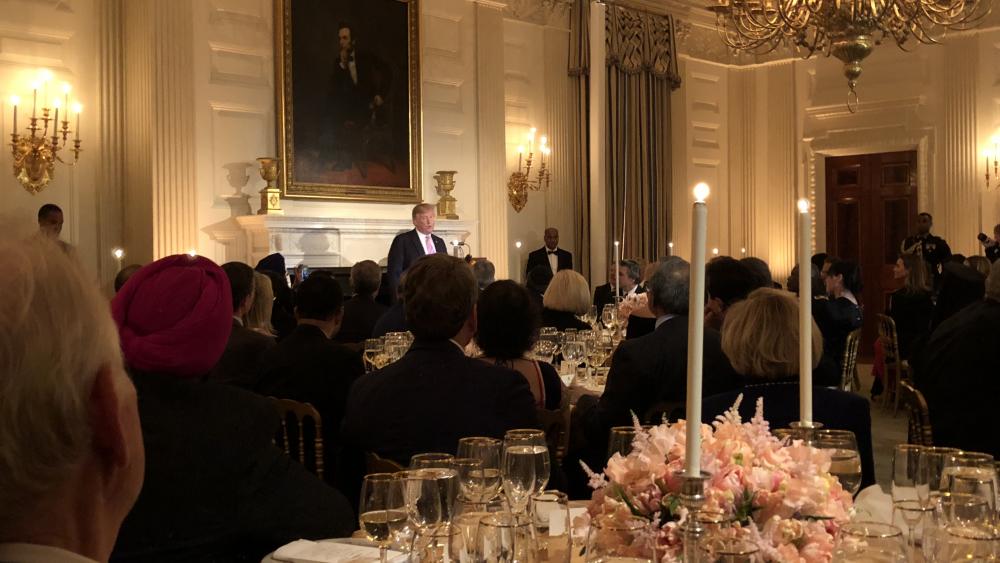 WASHINGTON – About one hundred people – religious leaders, Trump administration officials, and their guests – celebrated the "power of prayer" at the White House Wednesday night ahead of the day set aside annually for Americans of all faiths to pray for thanks and guidance.

"America will be a nation that believes forever, and we certainly believe – more than anyone – the power of prayer," President Donald J. Trump declared in the State Dining Room before continuing with an unscripted flourish: "It's the most powerful thing there is."

In his opening remarks preceding the National Day of Prayer, the president welcomed representatives of various faiths, including Christians, Muslims, Jews, Sikhs, and Hindus.

"Tonight we break bread together united by our love of God, and we renew our resolve to protect the sacred freedom of religion – all of us," he said.

The president also acknowledged the recent religiously-motivated attacks both in the United States and abroad.

"All of us in this room send our love and prayers to the Jewish Americans wounded at the Chabad of Poway shooting in California," he said. "And our hearts break for the life of Laurie Gilbert-Kaye who was so wickedly taken from us."

"We mourn for the Christians murdered in Sri Lanka on Easter Sunday and grieve for the Muslims murdered at their mosques in New Zealand," he added. "Here at home, we also remember the three historically black churches burned recently in Louisiana and the horrific shooting last year at the Tree of Life Synagogue in Pittsburgh."

The roomful of staff and supporters of Trump's religious liberty policies applauded when he called for an end to violence and terrorism against people of all faiths.

Saluting their approval of his record, he referenced what many of them acknowledge originally motivated their support for his candidacy.

"I'm thrilled to report that tomorrow the Senate will confirm the 100th federal judge through the court system," he announced. "Under my administration, we're getting to a level where we're going to be breaking records with respect to the judiciary, which means a lot to the people in this room who were treated very poorly. With time you'll see what happens."

The president offered his own report card, citing the confirmation of 145 federal judges and two Supreme Court justices.

Wednesday's event is the kick off to the National Day of Prayer, which lands on the first Thursday of May each year according to a law passed by Congress in 1988.

Last week, Mr. Trump issued a presidential proclamation in honor of the event, writing: "On this National Day of Prayer, Americans once again come together to give thanks to Almighty God for the bountiful blessings He has bestowed on our great Nation and ask for His unfailing counsel. We acknowledge our dependence on God's love to guide our families, communities, and our country away from harm and toward abundance and peace."

"Our Nation's honored tradition of prayer has sustained us and strengthened our trust that God will continue to watch over and accompany us through the best of times and the darkest hours. May we as Americans never forget the power of prayer and the greatness of our Creator. On this National Day of Prayer, let each of us, according to our own faiths, call upon God for His guidance and express our gratitude for the love and grace He bestows on our country," the proclamation read.