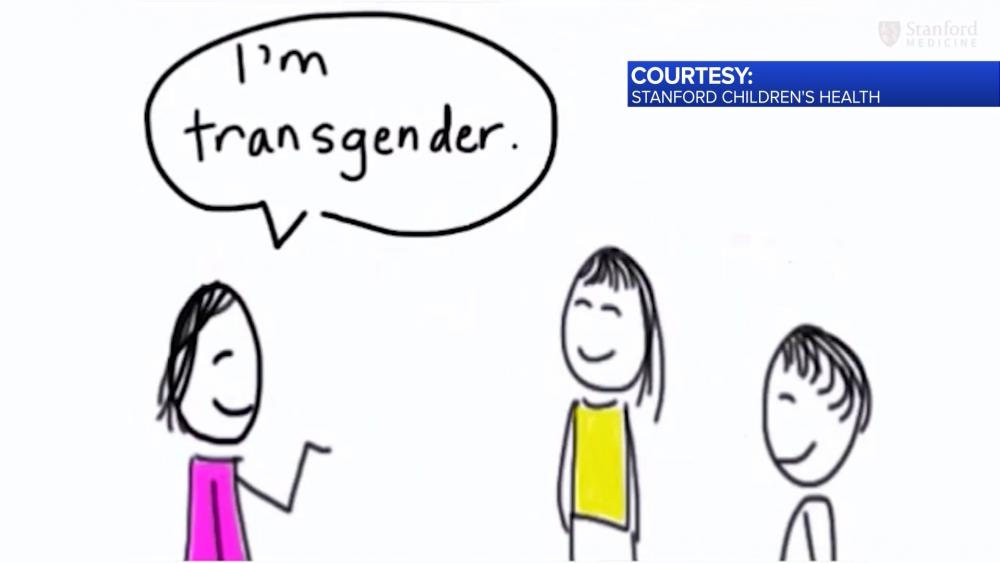 There's a growing number of parents who believe the transgender movement is destroying their children, both physically and emotionally. These parents come from a variety of backgrounds, regions and political affiliations – but they're unified in a belief that they're on their own when it comes to questioning and evaluating the reasons behind their children's gender confusion.

Many of these parents have reached out to Parents of Rapid-Onset Gender Dysphoria (ROGD) Kids, an organization that began in late 2017 and has since connected with more than 600 parents, some of who meet in 50 support groups across North America.

CBN News met with some of these parents in cities up and down the East Coast.

Kristie Sisson leads a support group in her community and says she saw no signs of any gender confusion in her daughter as a child. "She was the typical girl," she told CBN News. "She was playing with baby dolls and Barbie dolls and loved her little stuffed animals, loved to play dress up."

"Crystal" leads another support group and also works with The Kelsey Coalition which advocates politically on behalf of the concerned parents. She says her son showed no signs of gender confusion in his childhood. "He was a typical rough and tough little boy," she explained. "He was also into Star Wars. He played with all the ships and the action figures and he was big on wrestling."

"Kerry" is a New England doctor and self-described life-long liberal. She advocates with The Kelsey Coalition although she speaks anonymously. She says her daughter often acted as a tomboy growing up but says she never indicated that she had any distress with her body.

Kerry says she always believed in the transgender movement as a supporter of LGBT causes.

"I was all in because I looked around and there was nothing to suggest that there was any problem with this," she told CBN News. "All the progressives are on board. Everybody's doing it – it's fine and it's good."

So when Kerry's daughter initially came to her at age 11 and said she was thinking about becoming a boy, Kerry tried to be supportive and enthusiastic, despite a sinking feeling. At her daughter's request, she bought her a binder to flatten her chest and began budgeting to pay $1,000 a month for hormone treatments. She also began researching the medical protocol and found it alarming.

"The more I read the more I was like – it doesn't seem right," she said. Even after years of supporting the LGBT movement, she found it confusing. "When you're gay, you don't have to take drugs forever and have surgeries and you don't change your name."

"I'm Transgender and I Need to Start Transitioning"

Sisson says she was blind-sided several years ago when her daughter told her she wanted to become a boy. At the time she was 17, a senior in high school. "She came into the kitchen one night when I was cooking dinner and just told me 'Mom, I'm transgender. I'm a boy. I've always felt like a boy and I need to start transitioning."

Sisson's daughter, who now identifies as a male and has legally changed names, declined an interview with CBN News.

Sisson says she believes she's been undermined by what her daughter learned on the internet as well as high school and university officials who accepted and encouraged her identity change. She's not sure why she wanted to change but wonders whether it had to do with social acceptance and a trans friend.

Crystal found out about her son's gender identity change after he left for college and a bill came in the mail seemingly for him but with a girl's name. "I thought they messed up on his name," she said. "I didn't pay much attention to it. But when I questioned him about what this bill was he said 'I went to this clinic and I have gender dysphoria and I was born in the wrong body and I should have been a girl.'"

Parents Vs. The Medical Establishment

One of Crystal's biggest concerns: she believes her son and his therapist at school didn't explore the full range of mental health issues he was dealing with at the time. When she met with the therapist later, Crystal says the counselor told her she had accepted her son's desire to change his gender identity after one appointment and instructed Crystal not to question his new identity, saying it could increase his risk for suicide.

Parents like Crystal, Kerry, and Kristie Sisson are responding to what researchers say is a growing number of children and young people identifying as transgender. It's a movement that has spawned a sharp increase in medical facilities. As author Ryan Anderson explains in his book When Harry Became Sally, more than 45 pediatric gender clinics have opened in the US since Boston Children's Hospital started the first program for these children in 2007.

"It's just amazing how quickly this phenomenon has kind of arisen," he said. "It went from nothing to forty-five and they're at the most elite institutions in American public life."

The parents who are questioning their children's desire to change are pointing to a newly discovered population in the gender dysphoria world: young females who suddenly want a new gender identity.

Brown University researcher Lisa Littman calls it a potential new subcategory that warrants more research. Characteristics include adolescents who showed no signs of gender dysphoria in their childhood and then suddenly begin to experience it, clusters of gender confusion in pre-existing friend groups, pre-existing mental health issues, and immersion in social media and the internet.

Sisson believes her daughter fits the pattern. "Everything that she said to me sounded scripted," she said. "It seemed like she was learning it on the internet and possibly from her group of friends."

Sisson and other parents in the parent support organization, Parents of Rapid-Onset Gender Dysphoria Kids, say they're alarmed that educational and medical professionals are accepting their children's demands for social and medical changes without fully evaluating them for other possible mental health concerns.

And they say that these professionals are often shutting down their views as parents. A spokeswoman for the group told CBN News "the schools look at you like you're the problem and think you're abusive." She said the organization exists to provide emotional support for these parents.

Other groups, like The Kelsey Coalition and Hands Across the Aisle, are bringing together concerned parents and others who want to push back politically against the transgender movement.

But these parents remain in hiding for the most part and speak anonymously when publicly voicing concerns.

For many, just stating such their opinions publicly could lead to life-changing penalties. Kerry believes she could lose her job as a physician if her employer knew she's questioning pediatric transgender medicine. Other parents fear backlash from the schools their children attend and from their friends in addition to their child.

Kerry says she became suspicious when she realized that three other girls in her daughter's middle school class had also identified as boys and were starting hormone treatments.

As she began to research puberty blockers like Lupron she realized that side effects include sterility and a host of other issues.

"There is a lot of evidence that Lupron decreases your cognitive ability. It decreases your memory. It definitely decreases your bone density and it stops the hormone cascade that puberty is designed to flood your body with – these sex hormones that make all of you mature," she said.

"I'm of the opinion that this is a psychiatric problem and it should be approached psychiatrically rather than physically," he told CBN News.

He notes that research shows many children struggling with gender dysphoria grow out of it and says there's no solid evidence that the medical treatments are safe.

A Movement that Appears Unstoppable

He's also concerned that medical professionals are often too quick to accept a child's desire to change. "They do not get a full evaluation," he said. "They just get immediately the prescription for hormone treatment and ultimately the gender-affirming therapies that might include surgery."

Anderson describes transgender pediatric medicine as "entirely experimental." He said, "They don't have a single long-term study on the long-term consequences of permanently blocking puberty in a human being's body."

In many ways, the movement appears unstoppable, with support from schools, doctors, therapists, and their professional organizations.

But the growing number of parents quietly rising up in protest could make a difference.

Anderson says these parents and their concerns are a marked departure from the opposition to gay marriage. "This is happening to the bodies of young people and it's the medical intervention into the bodies of young people and I think that makes a lot of parents sit up – whether they're on the left or the right, whether they're religious or secular," he said.

McHugh believes a new generation of medically scarred and sterile transgender young people will call for justice, once they grow up and realize what happened.

"Eventually the truth will out and we'll know and I think we'll know tragically that many of these children have been cruelly treated," he said.

For now, Kerry says she and her daughter have decided to stop their plans for medical treatment. She says she will speak out publicly when the time is right.

"I do not understand my profession right now. I am appalled," she said. "I think we're going to look back on this like we look back on lobotomies."

Crystal says she continues to get together with her son and hopes that he knows that she loves him, no matter what decisions he makes about gender. "He knows that he can call me if he ever needs anything. If he wants to come home – the door's always open," she said.

Sisson says her daughter says she's happy but that she still aches for her and hopes for change. "I cannot give up hope that she's going to realize that this is a mistake. And that she will stop the transition and want to come home and be with her family again," she said.