VA School Goes All Out to Celebrate America's Christian Heritage 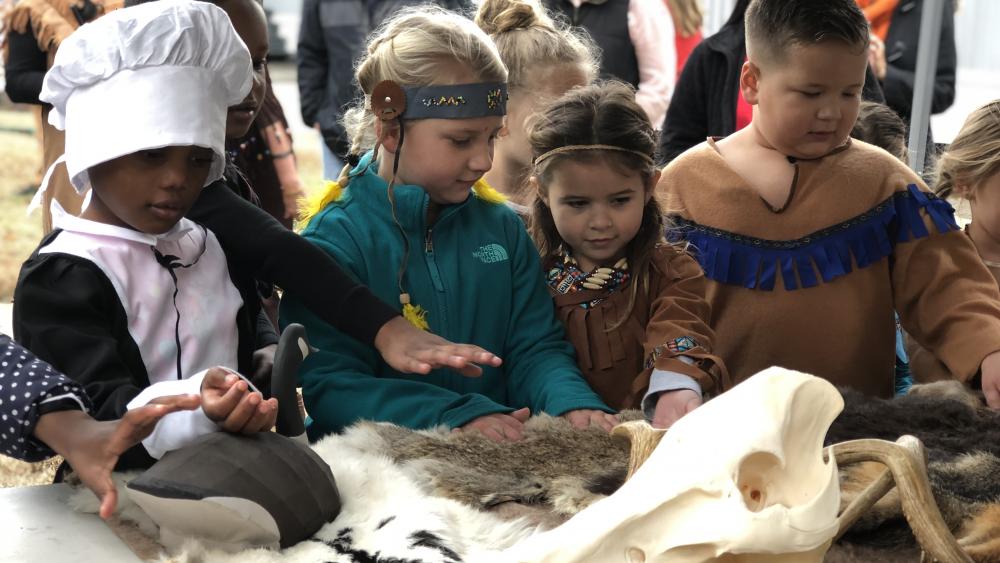 CHESAPEAKE, Va. – As many schools move away from re-telling the traditional Thanksgiving story, parents and staff at StoneBridge School kicked off their very own Christian Heritage Day, an annual celebration that pays homage to the nation's first Pilgrims and the Native Americans who helped them. This year, the entire campus transformed into Plymouth Plantation, the second English settlement in the New World. It's a big undertaking for this small private school that boasts just under 400 students from preschool through 12th grade.

"It gives the students an opportunity to go back in time and 'mildly' experience what they've learned about early European exploration and settlement on the (North American) continent, "5th-grade teacher, Candice Square-Miles, explained. Every year, preschool through 5th-grade students dress as Pilgrims and Native Americans — and an occasional turkey — while they learn more about what life would have been like for the country's early settlers.

In addition to learning the history, it's also a day to celebrate God as Provider.

Seeing God's providential hand in history is paramount at StoneBridge, especially as the traditional story of Thanksgiving grows increasingly controversial.

"Christian Heritage Day is important because we want our students to understand the biblical foundation of our country," 2nd-grade teacher Susan Byrum said. Byrum is a 15-year veteran at the school. She explained how she loves to teach the children about the different ways God intervened on the Pilgrims' behalf and provided for them through various Native Americans.

In between "skinning" small animals and trying squirrel meat, students learn about the life of Squanto through a historical reenactment.

"Squanto served as a type of Joseph (biblical figure in Genesis) to Pilgrims," Byrum explained.

This historic member of the Patuxet tribe of Massachusetts helped facilitate peace between the English settlers and the surrounding native tribes. He is a central figure in the first Thanksgiving story.

"We celebrate our Christian heritage through the Pilgrim Story as we look back and think about all they did to plant a new way of life in the wilderness. I'm grateful for God's Hand of Providence in their miraculous story," Head of School, Kathy Rader, said.

The first winter after the Mayflower landed, more than half of the colonists died from disease, starvation, and frigid temperatures. Without the neighboring Wampanoags teaching the Pilgrims how to hunt and harvest shellfish, the remaining colonists would have died.

"As we celebrate Thanksgiving Day, let us all remember that God alone gives life, and God alone sustains us through His Spirit in times of plenty and hardship," Rader added.

StoneBridge School equips students to view history through a providential lens, to help them understand how God uses individuals and circumstances to transform a nation's character and advance His Kingdom.