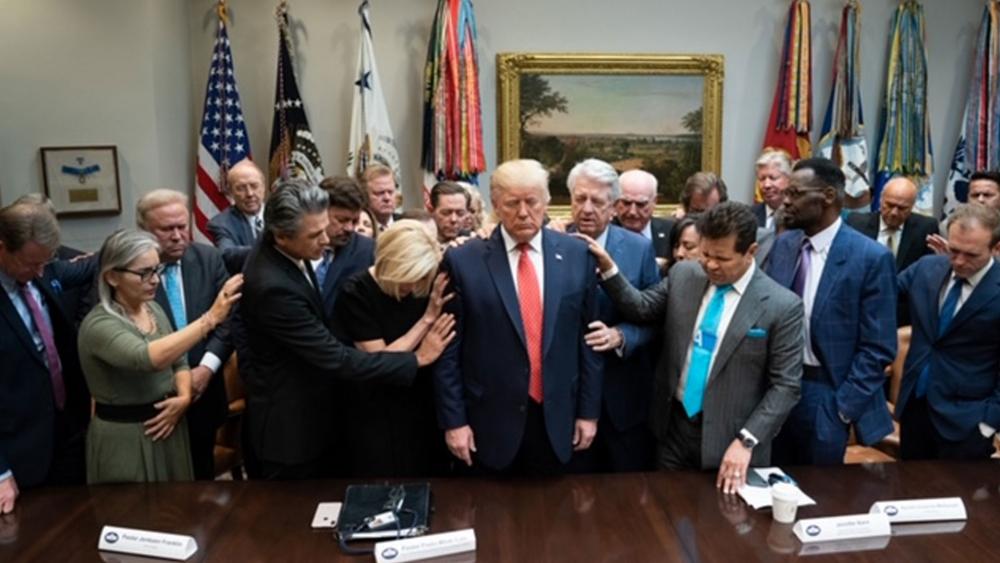 WASHINGTON – Faith Leaders from across the country prayed with President Donald Trump at the White House on Tuesday.

Gathering in the Roosevelt Room, they took time to not only pray for the Commander in Chief but for the nation as well.

"The primary purpose of the informal meeting with faith leaders Tuesday was for the President to brief faith leaders on the continuing, remarkable accomplishments of this administration—especially in areas that are important to evangelicals. I've never seen President Trump more upbeat, positive, and focused than I did in Tuesday's meeting. At the end of the meeting, several asked if they could pray for the President and he graciously welcomed the offer—as he always does," said Pastor Robert Jeffress. "This President always appreciates the prayers of the American people."

A privilege to meet with & pray w/ @POTUS.

Johnnie Moore, who helps organize an evangelical advisory group for Trump, called it a "Great discussion & CELEBRATION of many achievements." He points out some of Trump's accomplishments in a tweet, such as, "criminal justice reform, defending religious freedom, reducing abortion, combatting the opioid crisis & trafficking, the end of ISIS & Baghdadi."

Ralph Reed with the Faith and Freedom Coalition tells CBN News, "Tens of millions of Americans of faith are extremely grateful that President Trump defends time-honored values and the right of Christians and other religious minorities to religious freedom. I pray for the President, the First Family, and his staff every day. It is a privilege and honor to pray for any President, and most especially this President given his leadership."

The leaders discussed the Trump Administration's accomplishments for the American people and how the communities they represent from across the country are benefiting from these important policies.

Faith leaders applauded President Trump’s efforts to combat religious persecution and fight for the unborn. But the meeting also comes amid growing concerns in Trump’s evangelical base over his decision to pull troops out of Syria because it leaves US allies like the Kurds and Syrian Christians without protection.

Despite his decision in Syria, faith leaders are standing by the president during the impeachment inquiry and as the House prepares for their first formal vote on the impeachment process Thursday.