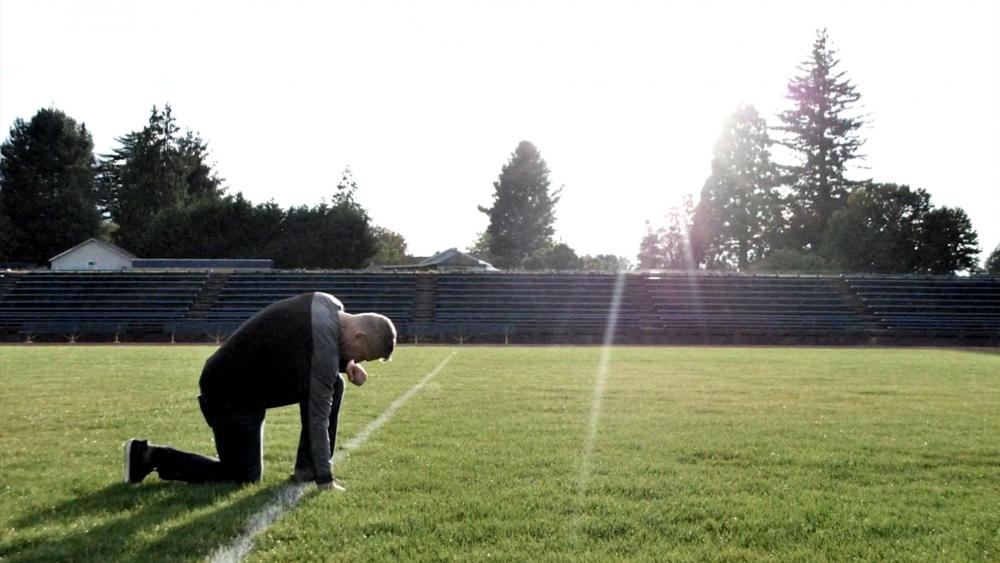 A conflict between the latter two loves of his life placed him in the middle of a legal fight that has gone all the way to the Supreme Court.

"Everything  – even down to my T-shirt is Bremerton Knights!" he said during the interview.

But that pride turned to disappointment in 2015 when the Bremerton School District suspended him for a different public display: prayer.

"At the beginning it was kind of awkward to me, because I was just giving thanks," Kennedy recalled.

He said it didn’t take long before his players started to ask questions: "'Hey, Coach, what are you doing out there?' 'I'm just giving thanks for what you guys did,'" he replied.

His "silent" post-game prayers on the 50-yard line caught on, spilling over to his players and even to opposing teams.

School officials worried that those prayers might give the appearance that the district approved of Coach Kennedy's public prayers, creating a potential endorsement of religion. They eventually fired Kennedy, who calls that act a violation of his right to free speech.

"No one should ever have to choose between living their faith and their job," said Lathan Watts with First Liberty Institute, which represents the former coach.

Kennedy’s advocates argue this case is about the First Amendment and American religious liberty.

"Coaches, teachers, students do not shed their Constitutional rights just by walking onto a football field or a public school," Watts explained.

Coach Kennedy's stance has sparked passion, with big-name supporters like evangelist Franklin Graham, former NFL coach Tony Dungy, and even President Trump weighing in. Critics, too, have sounded off expressing why they believe Kennedy’s stance is wrong.

Dori Monson is a popular right-leaning Seattle radio host who has addressed the case on his show.

"To be a successful coach you have to bring a diverse group of kids together," Monson explained. "I think once a coach starts imposing his faith in a public school, then I think you have a challenge bringing those kids together."

The issue hits close to home for Monson. As a Christian and former coach himself, he told CBN News he also prayed for his players during games but quietly without fanfare. He cited concerns about the country's religious diversity as the basis for his opposition to Coach Kennedy's approach.

"If my kids were playing on a sports team and that coach happened to be Muslim, I wouldn't want that coach praying with my kids," Monson said. "So I felt like, as a Christian, it's not my responsibility to pray with the girls that I was coaching at the public high school."

"I had some parents who said, 'I don't want my kid involved with that.' And I respected that. That is their right as a parent," Kennedy replied. "It was never a forced thing. It was never an asked thing."

In January 2019, the Supreme Court declined to consider the case. Four justices, however, expressed potential interest if the case explored whether the school's demand for Coach Kennedy to stop praying violated his right to practice his religious beliefs based on the First Amendment's "Free Exercise" clause.

"We consider that little opinion our roadmap to victory in Coach's case, and we're going to follow that now," said Watts, who serves as the director of legal communications for First Liberty.

Currently, the case is back in district court.

Meanwhile, Kennedy has returned to the football stadium to support the team – but from a different perspective. Now he's watching from the stands.

"I'm still thankful for being able to come here and we still got a team. I still see these young guys out here and seeing them out there praying still out on the field. So that's kind of cool," he said.

No Longer Bitter, But Planning to Fight On

While he misses the kids, he says he's no longer bitter about losing his job.

"I was blessed for eight years with these guys. And it was just awesome, and I look at my blessings instead of what I lost."

Still, as a former Marine, Kennedy says this is a fight that's bigger than him.

"Praying, I can do anywhere," he said. "The Christian side of me is, like, you don't take away my faith. Prayer makes no difference where you do it. But the Marine in me? It was like, yeah, I will fight for the Constitution and everybody's rights. It means something to me. I've got blood in that game."