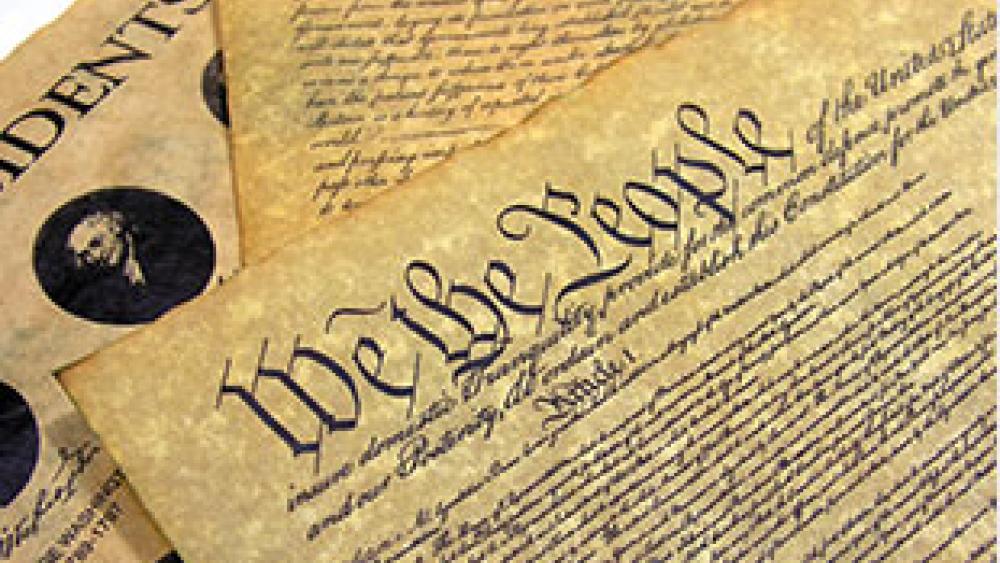 A new poll shows a majority of Americans believe the First Amendment should be rewritten to  "reflect the cultural norms of today," the poll by the Campaign for Free Speech reveals.

Nearly 60 percent of Millennials –  those 21 to 38 years old – believe the Constitution "goes too far in allowing hate speech in America."

A majority of Millennials also said hate speech should be a crime, with more than half of those saying it should carry jail time.

About 60 percent of respondents also want to curb freedom of the press, saying the government should be able to take action against media outlets that publish biased, inflammatory, or false content.

Those who would change the First Amendment say free speech is a value, rather than a right, and so it can change as society's values about it change. But that's a shocking idea to many Americans.

"Never in American history has there been as strong a threat to freedom of speech as there is today," says Dennis Prager, conservative commentator, founder of the internet's PragerU, and co-producer of a documentary film on threats to free speech released today, called "No Safe Spaces."

As an Orthodox Jew, Prager tells the story of how Nazis chose the Chicago suburb of Skokie, Illinois, home to many Jewish survivors of the Holocaust, to march with their swastikas and Hitler-style salute. Dubbed the "Swastika Wars" by the Chicago Tribune, it was abhorrent to the people living there, and some filed suit to stop it through the courts. But Prager says many Jewish groups and liberal groups, including the ACLU, still defended the American Nazi Party's right to march because they believed in free speech, even if it was filled with hatred. The controversy finally landed in the Supreme Court with a ruling in 1978 that the Nazis did have a First Amendment right to march.

Prager blames radicalized left-wing university faculties for misleading students on the First Amendment, applying it only to leftist speech, and stifling and even targeting differing opinions in their classrooms.

The poll found that 68 percent of students believe the social and political climate on their campus keeps them from speaking freely.

"They fear that their classmates might find their opinions offensive, so they just don't talk altogether," said Nicole Neily, president of Speech First, a group that fights for free speech on campuses.

She mentioned another poll showing conservative students tend to censor themselves.

"73 percent of strong Republicans say that they fear expressing opinions in class because they're worried that their grade might suffer," Neily stated.

She pointed out that's because it's often the professors who take offense.

Prager laments that today's students lack an understanding of America's founding principles because, in many cases, those principles are not taught to them. And if mentioned, they frequently are derided, distorted, or dismissed.

The fact that America's Founders saw a robust exchange of ideas and debate over issues as essential for all other freedoms, is lost on many students.

Even as a teenager, Benjamin Franklin gave voice to that idea when he wrote in 1722, "In those wretched countries where a man cannot call his tongue his own, he can scarce call anything his own. Whoever would overthrow the liberty of a nation must begin by subduing the freeness of speech..."

Neily pointed out it's often students themselves willing to curb the First Amendment because they think some speech can actually hurt them.

"They want to be free from emotional harm," she explained.  "Which is troubling in a way because you think 'this may be four years of your life, but you go out into the real world, you're not going to be protected from emotional harm.'"

Neily added, "You learn how to cope in the real world. For schools to bend over backward to try to prevent a student from having their feelings hurt, from being faced with a tough situation, from being exposed to opinions that they dislike, is doing those students a disservice."

Thus, Prager's new film, "No Safe Spaces," premiering today. It highlights campus situations where speech is no longer free, with hopes that exposure will lead to greater freedom to speak for everyone. With that in mind, the film has both liberals and conservatives decrying the loss of liberty on campuses and in society as a whole.

Prager told the Washington Times the film is "very needed, because only a small part of America knows what's really going on."

The importance of being informed was brought home to TV-watching Americans in spades 55 years ago this month when a future President of the United States sounded an ominous warning about how a free people could stay free, and pass it on to future generations.

The stifling of speech on today's college campuses shows how prescient his words were.

"Freedom is never more than one generation away from extinction," Ronald Reagan said. "We didn't pass it to our children in the bloodstream. It must be fought for, protected, and handed on for them to do the same, or one day we will spend our sunset years telling our children and our children's children what it was once like in the United States where men were free."