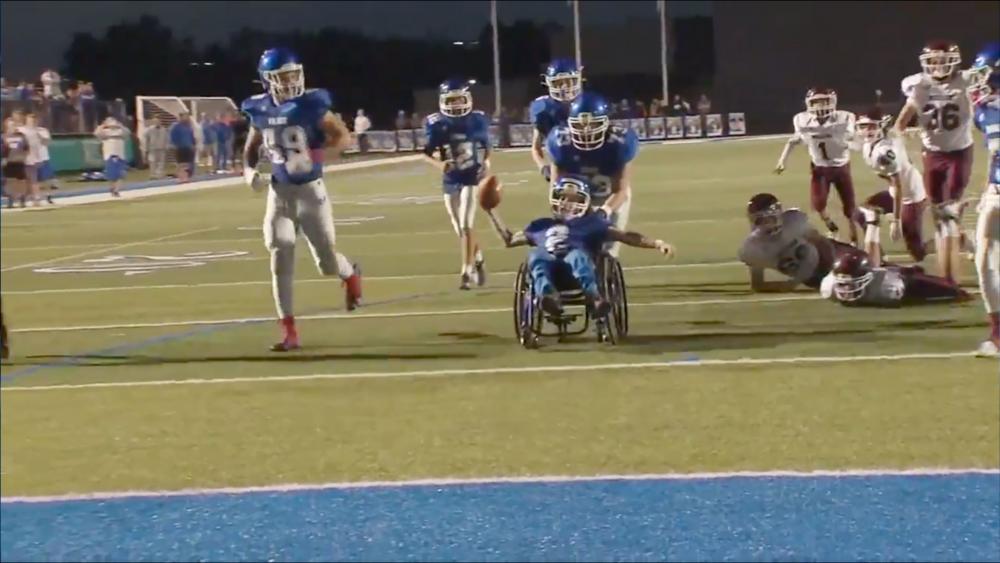 Football players at one Ohio middle school worked hard to help their team manager score a touchdown in a unique way.

Like many 15-year-old boys, Paul Townsend loves football but he is unable to play the sport, according to WKEF-TV in Dayton.

Townsend was born with spina bifida and must rely on a wheelchair to get around.

His love for sports pushed him to become the football team manager at Miamisburg Middle School for over two years.

But the teenager wanted to do more and physically play in the game.

Townsend's mom, Helena Baker encouraged him to ask his coach and to be persistent.

"He's been wanting to play football for a long time and I keep telling him to keep talking to your coach, keep bugging him. Just because you have a disability doesn't mean you can't chase a dream," she said.

Townsend's dream finally came true recently when he was given the go-ahead to play in a game on Oct. 9.

A fellow teammate said, "He's part of the team, he's one of our players. The whole team came together and we've been practicing his play and we just really want to give him that touchdown."

After rehearsing his role, Townsend was ready to get in the game.

8th grader Paul Townsend takes it the house to give the Vikings a 6-0 lead against Lebanon... pic.twitter.com/hdWDXuKTpN

"I really wanted to make a score and coaches were saying 'don't fumble.' It's a big deal because if you don't fumble, you get a touchdown like me. It felt like I wanted to do it again," Townsend said.

As you can see in the video that was posted to Twitter, the other team played their part in making the young boy's wish come true as several missed tackles can be seen. The player on the other team also cheer for Townsend after he scores the touchdown.

Baker said she's happy that the team has made her son a part of it.

"He had a two percent chance of living to the age of one. Obviously he's surpassed that and now he's talking about learning how to drive. Keep going for things," she said.