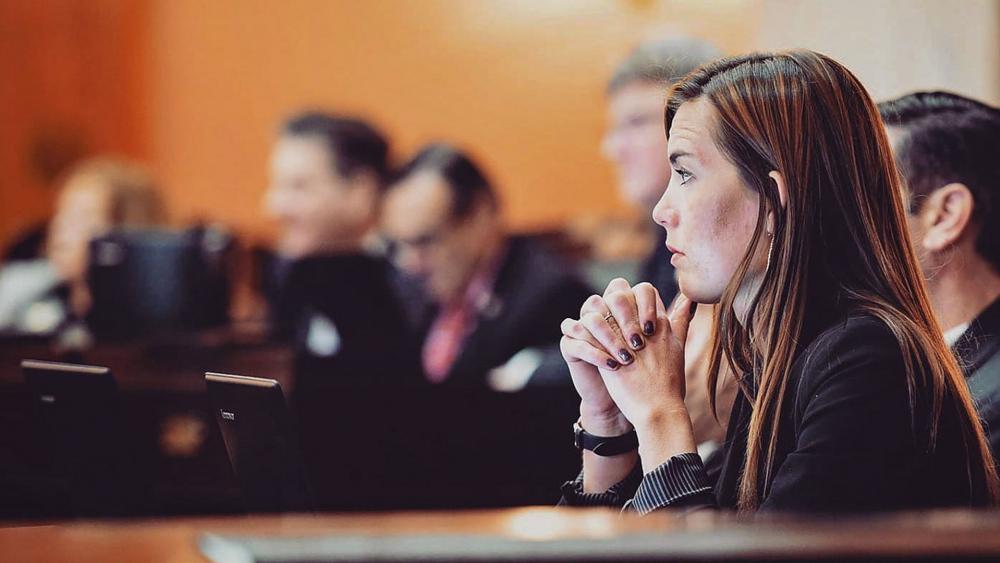 A young Republican lawmaker is spearheading an initiative to declare pornography a "public health hazard" in the state of Ohio.

A draft of House Resolution 180 resolves to "declare that pornography is a public health hazard with statewide and national public health impacts leading to a broad spectrum of individual and societal harms."

Ohio State Rep. Jena Powell, the resolution's primary sponsor, told CBN News there is a link between pornography and violence.

"We have hundreds of studies that show the correlation between pornography and its negative effects on men, and its leading to the abuse of women – 88% of pornography shows violence towards women, and of that 88%, 95% of it shows a positive or neutral reaction from women. It's increasing a culture of violence."

Powell was 24 years old when she was elected to represent Ohio's 80th district last year. Since then, the Buckeye state native has been making her mark as a tenacious representative determined to advance an ambitious political agenda. In April 2019, Powell cosponsored Ohio's heartbeat bill, triggering a ripple effect of other states to pass similar historic pro-life legislation.

HR 180 acknowledges the adverse impacts of pornography in the home, communities, and society at large. Excerpts are shown below:

WHEREAS, The "#MeToo" movement has exposed how dangerous and harmful it is when men stop viewing women as valued coworkers, neighbors, friends, and family and instead view them as sexual objects; and

WHEREAS, Studies have shown that there is a correlation between men viewing pornography and an increased rate of interest in rape; and

WHEREAS, Pornography provides sexualized depictions of violence towards women and children, which correlates with an increased demand for sex trafficking, prostitution, child sexual abuse images, and child pornography;

WHEREAS, Pornography use is correlated with (1) a decreased desire in young men to marry, pursue intimacy, or engage socially, (2) dissatisfaction in marriage, and (3) infidelity, all of which demonstrate that pornography has a detrimental effect on the family unit;

RESOLVED, That we, the members of the Ohio House of Representatives of the 133rd General Assembly of the State of Ohio, declare that the pornography epidemic must be addressed by encouraging education, prevention, research, and policy changes at the community and societal level to confront the proliferation of pornography on the Internet and human trafficking; and be it further.

Ohio currently ranks 4th in human trafficking in the United States. One contributing factor to this ranking is the number of major interstates that intersect the state.

Recently, 104 suspects were arrested as part of a major multi-force human trafficking sting.

Franklin County Sheriff Dallas Baldwin said, "Human trafficking is an evil act that exploits innocent lives, takes advantage of the vulnerable, and endangers entire communities.  As the Sheriff of Franklin County, I've witnessed how destructive this form of trafficking is in our society."

What Is the Goal?

Given the non-binding nature of a resolution, there is no policy or legislative end. This resolution is an evidence-based concern that, if voted for, will document a majority of the Assembly acknowledging the public health risks associated with pornography.

Powell was clear to say that this resolution is not intended to outlaw or regulate pornography.

"This resolution does not outlaw pornography - it does not try to say that people cannot view it. That is a personal freedom that the Supreme Court has already affirmed…We're not trampling on anyone's constitutional rights," she said.

But Powell told CBN News that she hopes churches and communities take this issue seriously and that the evidence for this resolution can be educational and used to spread awareness.

Powell compared this matter to smoking cigarettes in that while smoking is legal, people should be aware of the adverse health effects that smoking has on their body. Likely, this resolution aims to inform society about the adverse effects of pornography.

CBN News viewers can get 15% off with the Promo Code: FAITHWIRE.