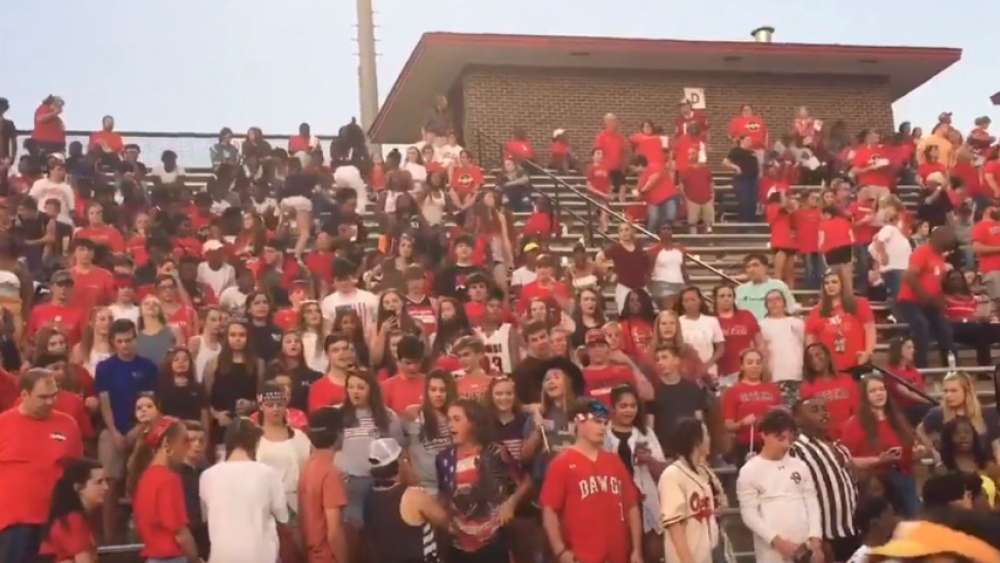 The Christian student population at an Alabama high school is fighting back against an atheist group after complaints were made about a pre-game prayer amplified through a loudspeaker.

FAITHWIRE: ‘They Shot My Dad!’: Suspect on the Loose After Man Shot Dead as He Left Bible Study With Family

The notorious anti-faith group, the Freedom From Religion Foundation, complained that students at Opelika High School should be prohibited from expressing their Christian beliefs in the schooling arena. In the letter, obtained by the Alabama News Network, the group cited the concerns of a parent who, because of the public prayer, felt alienated enough to want to “move their children out of the district.”

“The Supreme Court has specifically struck down invocations given over the loudspeaker at public school athletic events, even when student led,” the group declared.

In response, the district ordered administrators at Opelika to enforce a “moment of silence” to stop the game attendees from praying vocally.

“We recognize that the United States of America is a nation of laws and we will abide by the current law,” OCS Superintendent Mark Neighbors on the told the outlet.

“Our students are allowed to pray, but our coaches are not allowed to participate,” he added, referring to a portion of the letter which alleged that coaches were praying alongside students.

The students, however, were having none of it. Far from remaining silent, they chose to defiantly recite the Lord’s prayer out loud.

Opelika students in the @OHSdawgpound recite the Lord’s Prayer prior to kickoff tonight pic.twitter.com/5nsS1Ly23D

“You’re taking [prayer] away from the majority, so now we’re having to go about it a different way,” student Phoebe Darcey told WSFA.

Speaking in defense of the students, Trinity United Methodist Church Youth Pastor Steve Bass added that the original prayer was not even “overtly Christian,” but merely a chance to bless the players in their game.

“It was always, ‘Hey God, please keep our players safe from injury, help the fans and the players to have good sportsmanship, everyone have a good night,'” he told WFSA. “It was nothing offensive.”

Student-Led Prayer Being Snuffed Out?

Prayer at school football games has become a contentious issue across the country in recent years, with most of the restrictions being triggered by FFRF complaints.

As Faithwire previously reported, in 2017, another Alabama district, Lee County, halted its decades-old practice of letting students recite the Lord’s prayer before games. In a bizarre coincidence, the issue was raised by FFRF after Smiths Station High played Opelika. In response, a GoFundMe was set up to help fund the Smiths Station Fellowship of Christian Athletes.

“The students are as wise as any adult I heard speak tonight,” a description of the fundraiser read at the time. “I know they will use these funds as to further the word in the best light possible and fight hard for their right to pray.”

Then, just last week, a high school in Georgia was prevented from hosting a student-led prayer before their football game after a complaint was lodged by the atheist group.