'I Can Trust God,' Skydiver Saved by Prayer After Mid-Air Collision 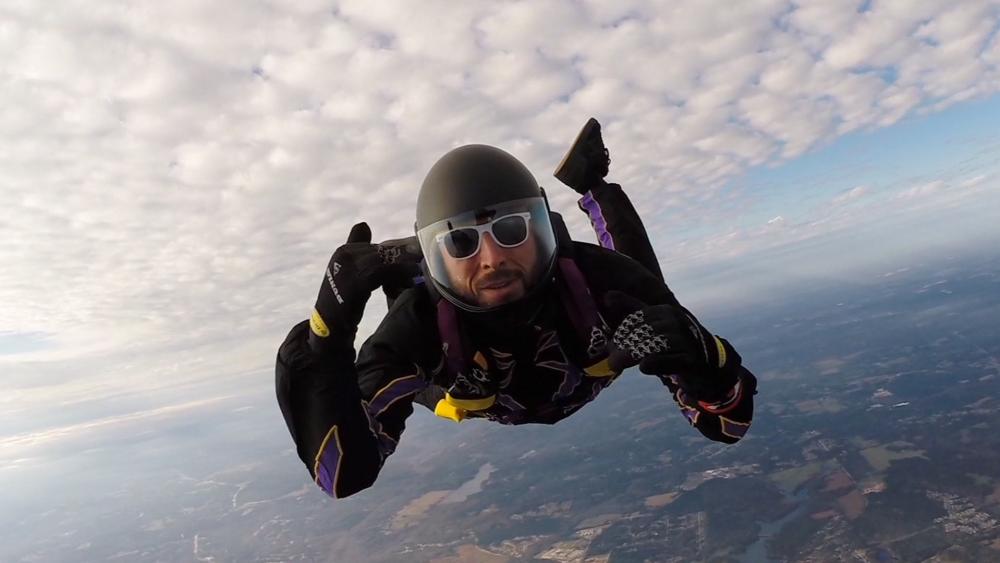 A man's journey into skydiving as a way to strengthen his faith turned into an incredible story. It starts with a mid-air collision caught on video that you must see and ends with a miracle.

"I knew I was falling and I knew I was falling to my death, but it was an acceptance. There wasn't anything there. There was no fear, there was no – I just accepted 'This has happened, I'm dying, and there's nothing I can do.'" In 2011, Korey Fisher began looking for a way to gain self-confidence and learn to trust God in deeper ways. That's when he discovered skydiving. Six years later he was a certified skydiving instructor with 1500 jumps to his credit.

"I thought to myself 'This is closer to what I imagine God wants us to live like', this – experiencing this, uh being alive. It's about being alive," Korey says. Then in November of 2017, his life nearly came to an end when he and another skydiver collided in midair.

"I only saw the individual for about half a second before the collision, in that half a second I literally remember thinking, 'I'm dead.' I just remember accepting it. There was nothing I could do." The two fell over 200 feet before hitting the ground. Miraculously, both survived. Korey was in and out of consciousness. He says, 'I tried to move and couldn't, and then passed back out. the next thing I know they're putting me in a helicopter, but it was evident I was dying.'

He was life-flighted to a nearby hospital with a broken neck, twelve broken ribs, and massive internal injuries. Korey was fighting for his life. His mom Ria remembers the call from the hospital. "They told us that there had been an accident that he had been catastrophically injured and that we needed to come to the hospital right away and my heart sunk."

At the hospital, Ria, and Korey's dad, Terry learned their son might not make it through the night. Even if he did, he might be paralyzed for life. They asked their church and community to pray for a miracle. Terry says, "God gave us the peace from the very beginning not to panic. Not to go into a circular thought process that you can all go through when you're in a traumatic situation."

"There was definitely prayer going round the clock for Korey in multiple places, multiple churches," says Ria.

He survived the night. By then they learned there had been another miracle. Spinal surgeon Said Elshihabi says considering the severity of his broken neck, Korey's spinal cord should have been severed, which would have left him paralyzed for life. He says, "It's in my opinion honestly it's short of miraculous, when I initially got the call my initial question was how bad is he in terms of paralysis, And the trauma doctor his words were specifically 'you won't believe it but he's moving everything.'

Essentially what he had done was separated the two levels and shifted the number six bone completely in front of the number seven bone. The way to present this way is essentially with a quadriplegic or paraplegic type of scenario."

Ria remembers, "When his surgeon told me that he had in all the years that he'd been a trauma surgeon he'd never seen this injury without paralysis he said he fully expected to walk into that trauma bay after looking at his MRIs and find a paraplegic and he said to find full movement that blew him away. He said this is the first time I as a physician can say I have seen a miracle."

He still needed surgery and prayer. On the way into surgery, Korey woke up and asked to speak with a Chaplin. Korey remembers, "I'm about to go into a very serious surgery and I need Jesus now. They brought me a phone and there was a loving man on the other end who agreed with me in prayer, quoted scripture with me, and then prayed. And I remember feeling the-the peace and that uh that I was going to be all right."

His surgery was a success, now doctors were saying Korey would need to spend months in a rehab hospital, but Korey believed for another miracle. Ria says, "The first words out of his mouth to me were 'Don't worry mom Jesus has got this.' He said, 'I'll be home for Christmas.' And his doctors are standing on the other side of the bed behind Korey's head where he couldn't see them and they're shaking their head, 'No'."

But just three weeks after the accident, and well before Christmas, Korey walked out of the hospital without pain and completely healed. Korey says, "Not only did Jesus save my life, but my recovery was supernaturally graced as well. It's completely a miracle. No-no doubt about it. No doubt about it.

Korey was cleared of all fault regarding the accident. He has since resumed skydiving with even more confidence that God is with him in every situation. He says, "He loved me that much to gracefully save my life and spare me all of this and all the dreams that I had that could have been taken from me in a second."

"What it made me realize is that I can trust God. That he will answer my prayers. You know I look at it this way; he jumps out of that plane and jumps into Jesus' arms." says Ria.

Korey says, "If he can supernaturally change a human being falling out the sky's situation, to not die, to not be paralyzed, to override physical limitations of the human body when striking the ground, He can handle all of the things in my life that I'm not in control of. To give me my life back completely, uninhibited by anything, is overwhelming to me."