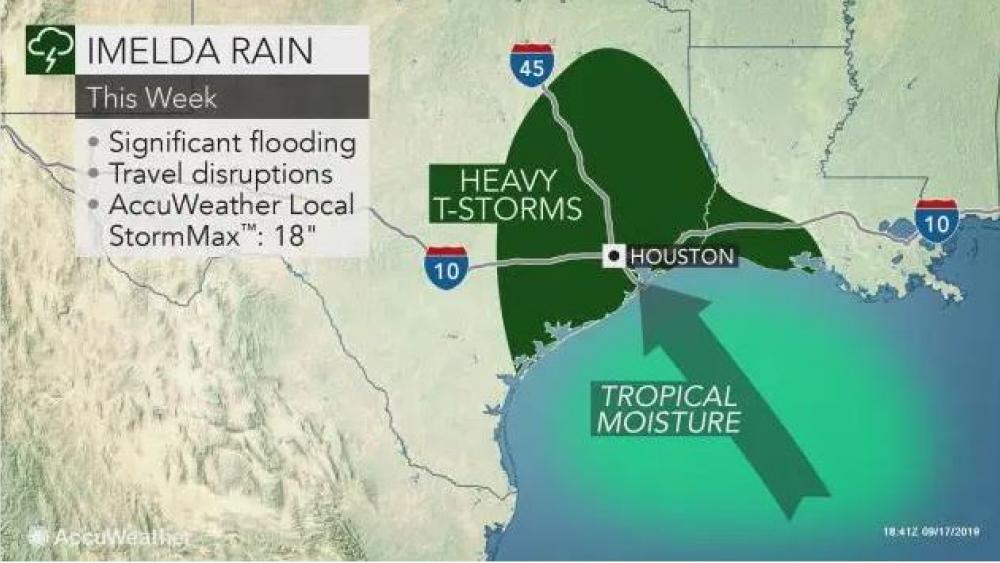 A rapidly developing system strengthened into Tropical Depression Eleven on Tuesday at Noon CDT and one hour later was dubbed Tropical Storm Imelda. The Houston area and other places in eastern Texas are bracing for up to 18 inches of rain.

The development of Imelda occurred just a few hours after Tropical Depression Ten formed over the central Atlantic.

The center of the system made landfall near Freeport, Texas, around 1:30 p.m. CDT, less than an hour after becoming a named tropical storm.

As Imelda moves inland, the strengthening process will gradually weaken. However, torrential rainfall will be unleashed. Isolated tornadoes and waterspouts may be spawned.

Regardless of the official designation of the storm near the Texas coast, enough rain is forecast to fall to cause significant street, highway and low-lying area flooding from southern Louisiana to the middle of the Texas coast. This includes the cities of Lake Charles, Louisiana, to Beaumont, Houston, Galveston, Matagorda, Victoria and Corpus Christi, Texas, this week.

A general 6-12 inches of rain is likely to fall in this swath with an AccuWeather Local StormMax™ of 18 inches into Friday.

Some heavy rain and the risk of localized flooding can also extend inland to Lufkin and College Station, Texas.

The AccuWeather RealImpact™ Scale for Texas with this feature is a one. The primary risk will be from flooding even though much of the area has been experiencing abnormally dry to drought conditions prior to the storm's arrival.

However, should the system stall and more rainfall than is currently anticipated, the impact scale could increase, especially if the heavy rain persists over the Houston metro area, which is highly prone to substantial flooding in situations such as this.

People may want to consider an alternate route away from flood-prone roads as the storm progresses.

The large, slowly-spinning storm will generate rough surf and frequent and strong rip currents from Louisiana to South Texas. Bathers should use extreme caution and avoid venturing too far out into the water.

Rip currents can change in strength and location with the tide cycle.

Tides will run a bit above normal with the risk of minor coastal flooding at times of high tide.

Boaters should expect rough seas with the risk of sudden, intense squalls.

Outside of the heavy rain and thunderstorm area, hot and humid late-summer conditions will prevail over the south-central United States this week.

Meanwhile, AccuWeather meteorologists are tracking the latest with Humberto in the Atlantic as the strengthening hurricane will come dangerously close to Bermuda. Rough surf will persist along the East Coast much of this week as the storm steers away from the U.S.