'Vicious Bullies' Threaten Rand Paul and Others in Street: Police 'Literally Saving Our Lives from a Crazed Mob' 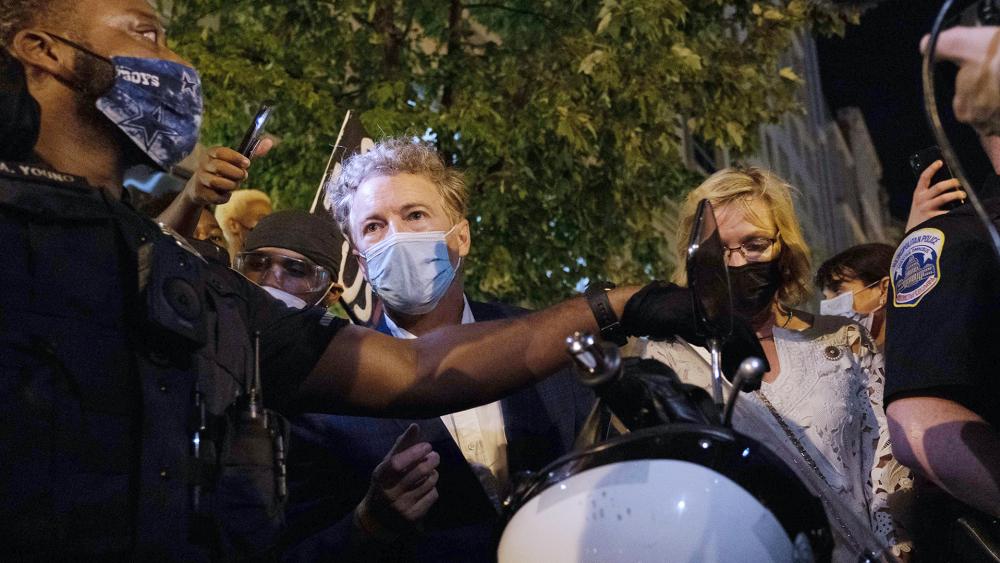 The final night of the Republican National Convention did not end well for attendees who faced physical and verbal threats from a street mob as they tried to get home. Top lawmakers like Sen. Rand Paul (R-KY) say they were afraid for their lives as they tried to dodge the rage of the crowd whose shouts were laced with profanities and Black Lives Matter phrases.

After President Trump's acceptance speech at the White House, his supporters were confronted by screaming protestors who physically surrounded them and threatened them as they tried to get to their hotels or homes.

It was a harrowing experience for Paul and his wife. The Republican senator told Fox News he was seriously concerned he and his wife would be beaten by the crowd if it hadn't been for the help of brave police officers, one of whom was physically assaulted while protecting the couple.

WARNING: GRAPHIC LANGUAGE is included in the following video tweet.

Rand Paul just got chased by a crowd back to his hotel, after leaving the White House from Trump’s Republican Party Nomination #DC #DCProtests pic.twitter.com/h1kPcZG1jh

Paul says some of the BLM protestors were shouting at him to "say her name", referring to Breonna Taylor. He said his attackers were clueless that he is actually the author of the Breonna Taylor Act which would end "no-knock" warrants. In other words, he actually supports the very thing they were screaming about, to protect the rights of Americans from police intrusion into homes, but he says there was no reasoning with them.

In an article written for the Washington Examiner, Kelly Paul condemned the Associated Press for stating that Rand's use of the word “attack” was inaccurate and unwarranted.

“When you are surrounded by throngs of people screaming in your face and preventing you from getting away, that is an attack,” Kelly wrote.

The distress she felt during those moments was evident as she described the terrifying incident.

“As the mob grew and became more threatening, we literally could not move, and neither could the two officers for several minutes," she wrote." The rioters were inches from us, screaming in our faces. After several harrowing minutes, additional officers arrived with bikes and surrounded us to create a moving barricade to escort us to safety. The video showing us walking is after the additional police had arrived. Before that, we were pinned in the center of a swirling maelstrom of hatred and threats."

Rand said there's "something going on here" and the FBI "needs to be involved".

"I promise you that at least some of the members and the people who attacked us were not from DC," he said. "They flew here on a plane. They've all got fresh new clothes, and they were paid to be here. It's a crime to do that, and it needs to be traced. The FBI needs to investigate."

On Twitter, the senator thanked DC police for "literally saving our lives from a crazed mob."

Other lawmakers were also confronted by the street mob, along with some unnamed RNC attendees and some evangelical Trump supporters.

The Daily Mail reported RNC committeeman Chris Ager and his wife were repeatedly harassed by a protester who repeatedly threatened them as they tried to get back to their hotel.

Daily Caller Reporter Phillip Nieto tweeted several videos of the confrontations, including one that showed two men in suits walking down the street who are surrounded by protesters with one shouting "Racists! racists!" while they recorded them on their phones.

In an email to CBN News, the Rev. Johnnie Moore, a commissioner for the United States Commission on International Religious Freedom said he and other evangelical leaders were confronted as well.

"There were over 150 national evangelical leaders in attendance last night," evangelical White House adviser Moore said. "Violent provocateurs waited for us (& others) outside the White House gates in the city's jurisdiction, at nearly midnight. Rather than succeeding at intimidating us with their vicious threats of violence, expletives, blasphemous slogans, hatred & intolerance they simply proved the very points the President made in his speech.  The contrast was startling between the two visions of America's future. No doubt, DC's Democrat mayor slept peacefully in her bed while these threats, attacks, and insults were not even reserved for the elderly, disabled or young. I saw it with my own eyes and heard it with my own ears. What's awful is that the very thing this does is take away the voice of peaceful protestors, whom we want to hear. It was Democrat-endorsed & Democrat-enabled anarchy."

Moore continued, "I want to sincerely thank the many members of law enforcement who worked so hard to get us home safely last night."

The Rev. Samuel Rodriguez, the president of the National Hispanic Christian Leadership Conference was also at the White House event and witnessed what transpired afterward. He told CBN News that what happened was not a protest.

"What happened last night outside the White House was not a protest. It was a vicious mob whose only purpose was to spew hatred and vitriol — even on the elderly and disabled," Rodriguez said. "Everyone agrees that change is required, but the long march toward justice cannot devolve into the exploitation of justice by a violent few. Every Democrat should condemn the actions of these bullies. In this case, silence is complicity."