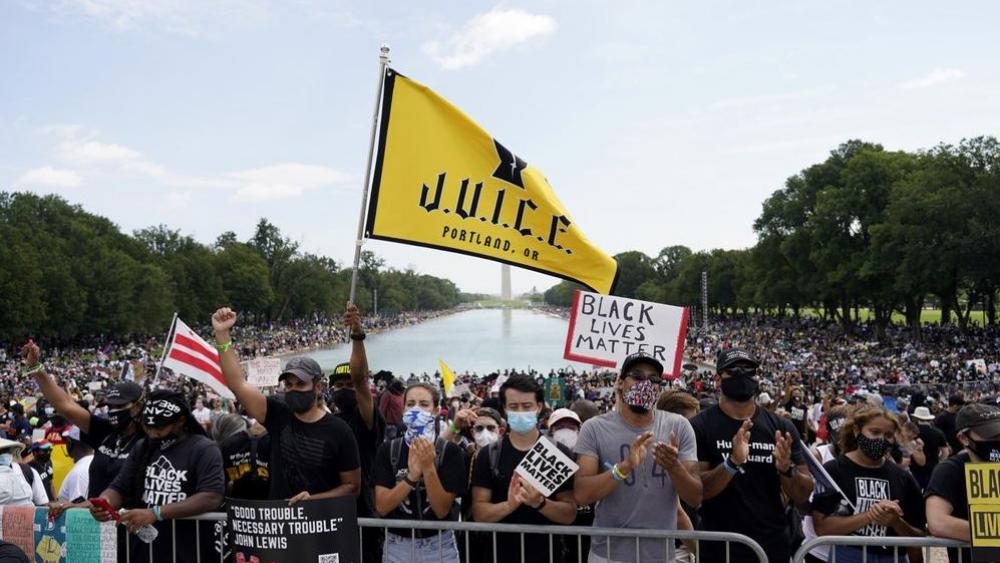 Crowds streamed into Washington, DC on Friday for a march on the National Mall commemorating the original march on Washington led by Dr. Martin Luther King, Jr. 57 years ago.

This one was different though. Sparked by the killing of George Floyd, it was billed as the "Get Your Knee Off Our Necks March."

Organizers say it was necessary to come back to Washington on this historic day to demand change.

Sharpton had that conversation at the Lincoln Memorial flanked by family members who've personally experienced loss, including Jacob Blake, Sr. Kenosha, Wisconsin police shot his son in the back seven times during an arrest last weekend.

"We are going to be the generation that dismantles systemic racism once and for all now and forever," Yolanda Renee King told the crowd.  She is the only grandchild of Martin Luther King, Jr.

"So, if you're looking for a savior, get up and find a mirror," Martin Luther King III said. "We must become the heroes of the history we are making."

While thousands gathered for the protest, Bishop Aubrey Shines, chair of Conservative Clergy of Color, condemned it and Sharpton.

"Men like him don't desire any cure because it keeps them prominent and it keeps them with a job," Shines said. "He doesn't represent Judeo-Christian ethos. If he did you would think he'd be marching in the name of not just George Floyd, but 20 million people who are black who've been murdered in the womb."

"I challenge every single one of your viewers to name one single law that Al Sharpton and his ilk are trying to change," Shines said. "There are none."

"We need Mitch McConnell and the US Senate to meet on the George Floyd Policing and Justice Act or we're going to meet you senators at the polls on Nov. 3," Sharpton said.

"We didn't just come today to have a show," Sharpton said. "Demonstration without legislation won't lead to change."

The day included taped remarks from Democratic vice presidential nominee Kamala Harris. She reminded the crowd that they stand on the shoulders of those that came before them.

"I have to believe that if they were with us today, they would share in our anger and frustration as we continue to see black men and women slain in our streets," Harris said.

The crowd marched from the Lincoln Memorial to the King Memorial.

Bishop Shines said the march was a representation of putting ethnicity above God, a form of idolatry. He said the real issue is black men standing up and taking care of their children and families.

Event organizers say it's sometimes difficult for black men to stand up in a system that pushes them down.