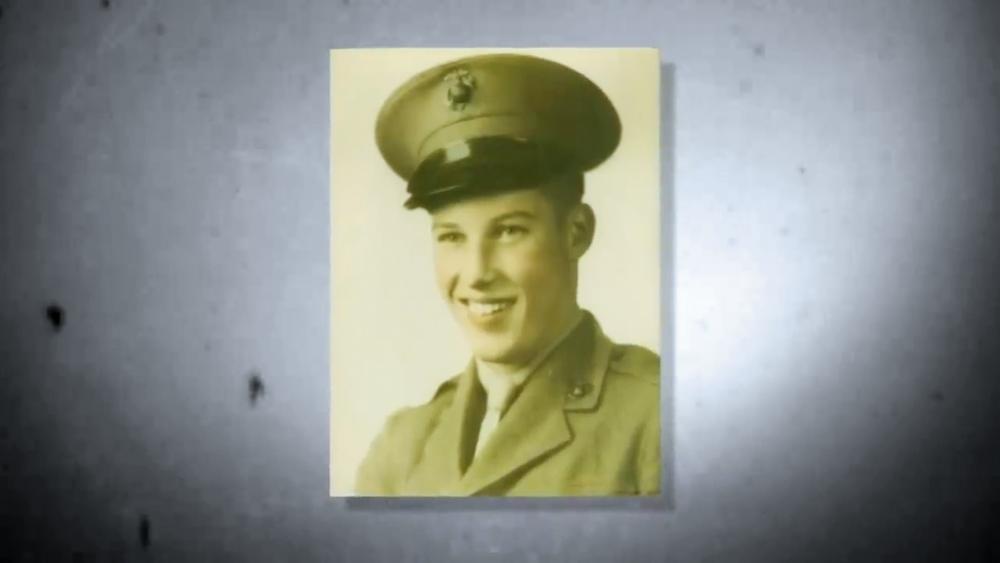 As America and the world recently observed the 75th anniversary of Victory of Japan Day on August 15, MacCallum was telling a personal World War II story in a book called  Unknown Valor: A Story of Family, Courage, and Sacrifice from Pearl Harbor to Iwo Jima.

It's the story of those who sacrificed everything at Iwo Jima, one of the bloodiest and most brutal battles of World War II. And for MacCallum, it's deeply personal.

"His sister is still alive, Nancy Gray," MacCallum said. "She's my Aunt Nancy, so, you know, he would have been my Uncle Harry."

At 18, Harry left home and enlisted in the Marines.

"Obviously his family was concerned. He was very young. His mom wanted him to finish high school and so he did that for her but as soon as he graduated he was off to Paris Island in South Carolina for training and then to the West Coast and then on the USS Rochambeau across the ocean to Guam and, ultimately, to Iwo Jima," MacCallum explained.

She skillfully weaves Harry's story and those of the others who served on the island together with the history of the war on the Pacific front. She says her fascination with Harry started when she was young.

When she was a teenager, her mother shared Harry's letters with her.

"[I] remember reading them and I just started crying. They were so moving to me and I wanted to know more about him and about his life and when I started writing the book I got to a whole other level because my Aunt Nancy and I sat down and we spoke for hours and I interviewed her. That was the very beginning starting point of working on the book was just an interview at her house. And I asked her deeper questions that I had never asked before about him and about growing up," she said.

"They had a hard life. They lost their Dad when they were 12 and eight years old – the two children. And my Aunt Anne, Harry's mother, who I was very close to growing up, she's my grandfather's sister, she went back to work and supported her family and did so selflessly and courageously and without ever whining or complaining."

And that was just the beginning of her research. MacCallum traveled to Iwo Jima to see the place where Harry and others made the ultimate sacrifice.

"It was extraordinary and I knew that I had to go there in order to tell the story accurately, to walk on the island," she said. "The island is small. It's only eight miles square and it was loaded with 60,000 US Marines and 20 to 30 to 40 thousand Japanese soldiers who were mostly in the island – they had dug 11 miles of tunnels. So we got to see some of those caves and tunnels. I climbed Mt. Suribachi where the flag was raised and looked down at the black beaches and we climbed up the beaches which are black volcanic sand and they're hard to climb up, those terraces. They're very big and wide and so when they landed and hit the beach they had to climb over two plateau terraces to get to the main part of the island where the airfields are. So I climbed them with, you know, jeans and a shirt on, not with a rifle or a pack on my back and certainly not under fire and it was difficult just under those circumstances so it gave me a real sense of just how hard it was to fight on the island. It was a brutal, brutal battle and so many people lost their lives."

Including Harry Gray, who died in a nighttime mortar attack.

With the fear of death looming large over these men, Harry and many on the island turned to their faith for comfort and strength.

"You know what, Jenna, that was a surprise to me as well in some ways because every time I got letters or every time I dug in, it was just this very natural thing for them to talk about hoping that God was watching over them. One of the most moving things I found that I didn't know existed was Harry's wallet which was in his front pocket when he was killed and it was sent home to my Aunt Anne when his body came back. There was a package with the things that were on him, and he had a ring and he had an ID bracelet that his girlfriend had given him inscribed, and he had this wallet that was in the front pocket. And there were bloodstains on that, there were pictures of his family, and then there was this little tiny, little tiny prayer book and in the back of it he had written in his own handwriting this beautiful prayer which basically said, 'watch over me but whatever is Your will is what will happen and I pray that You'll watch over me.' And just to think of this 18-year-old writing this beautifully written, painstakingly lettered prayer and making sure that it was with him in his pocket was really moving to me. And my Aunt said, you know, I don't remember him being particularly religious when we were kids when we were growing up but there's something about the battlefield I think that if you have that foundation in your life and you've been raised that way, you turn to God. And I thought it was fascinating that there were 19 Catholic priests who were on the island and that they were giving communion sometimes four, sometimes five times a day – these men were asking for it, these Marines on Iwo Jima, knowing that they could die at any minute. So, there's a real presence of God in this story that kind of unfolded to me in a very real way as I learned about them and their faith."

Even though Harry didn't survive the war, his legacy lives on. In writing the book, MacCallum met some of the men who served alongside him.

"On a personal level, I wanted my kids to understand it but when I started researching him and the letters that two other men wrote to my grandfather and to my Aunt Anne, telling what happened to Harry and how brave he was and how much they loved him, every string I pulled on led to more stories and more people."

Harry's legacy lives on in another way as well.

"My son Harry is my youngest and I named him with Harry Gray in mind," MacCallum. "He is roughly the same age now that Harry was at that time and I hope that this book will be a legacy for him and for all my kids and for other people too because my feeling is that, you know, it's not just a story about Harry Gray. It's the story that so many families across this country have a Harry Gray, have someone that they lost who is not sort of someone who earned many medals or who was a hero that everyone's aware of but just an every day Marine who gave everything for our country."

The Battle of Iwo Jima lasted five weeks. In all, close to 7,000 men died. But because of men like Harry Gray who gave their all, the United States won that battle and, ultimately, the war.