'Artificial Reality': How Big Tech and Media 'Propagandists' Teach Us to Love Censorship and Hate Journalism 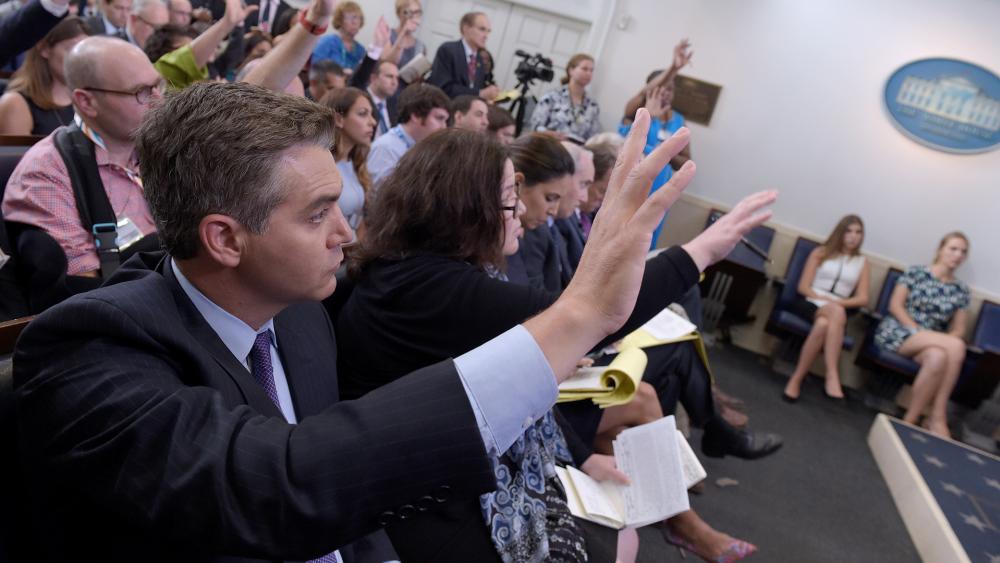 Jim Acosta of CNN and other reporters raise hands to ask a question during a briefing at the White House iin 2017. (AP Photo/Susan Walsh)
6215675268001
Distrust the Media? Veteran Journalist Sharyl Attkisson Reveals How We're Being Taught to Love Censorship and Hate Journalism

Media bias is nothing new to America. It's been going on for a long time. But today, whether it's news about Covid-19 or Donald Trump –  a new breed of journalists are advancing political narratives. They're slanting opinions – and even the outcome of our elections.

In this era of fake news and social media censorship, Americans are showing little trust in mainstream media. A Gallup poll taken just prior to the election found that only 9% of those questioned trust the media a great deal. One third – 33%  said they don't trust the media at all.

Sharyl Attkisson is a veteran journalist, former CBS investigative reporter, and host of the Sunday morning program, Full Measure.  Her new book is Slanted: How the News Media Taught us to Love Censorship and Hate Journalism.

"They're simply there to put forth a narrative. They are not acting as news as we once knew it or as journalists as we traditionally understood them to be," Attkisson explained. "They are simply trying to forward certain political or corporate interests. "

Attkisson believes big media influenced the election outcome by playing what she calls the "substitution game."

"When you know that but for the name being changed to a different party something would be handled entirely differently, you know there is a narrative at play or someone trying to manipulate an outcome or public opinion," she insisted. "And I would like to ask the question: when it comes to the election, how would it have been covered if not for the narrative? How would this have been covered if journalists had approached this from a neutral standpoint? I think you have a whole different landscape if that had been the case – both building up to this election and what's happened since."

Conservatives argue that Donald Trump's presidency would have proceeded differently had the media not obsessed over Russian campaign collusion. Robert Mueller's two-year, $32-million investigation put the allegations to rest, but few journalists offered apologies or corrections for false reporting.

"This was all mission accomplished on their part. They were not trying to disseminate the actual facts. They were trying to create this air of controversy and chaos for the couple of years that they did and when it didn't turn out to be true in the end –  as perhaps some of them knew all along, they still had accomplished their goal in my view, " said Attkisson.

Also, journalists who challenge the dominant media narrative are often ostracized or censored by big tech media. The New York Times labeled Attkisson and others "coronavirus doubters"  for their initial reporting of the COVID-19 virus.

"Who knows why they decided to pull certain people out and try to controversialize them so people wouldn't listen to our reporting. I only knew it was completely false, had to hire a lawyer because The New York Times would not take down the false information and we finally forced corrections that of course probably almost nobody saw," recalled Attkisson. "But this shows you that there is a big, deep narrative at play and The New York Times was really on that train from the start."

Print and broadcast journalists aren't the only ones showing bias.  Attkisson says comedians and entertainers also put their unique slant on the news.

"Strings are being pulled by these – I call them 'smear artists' and some of them have done interviews with me. They're not just pulling strings on the news and social media in these various obvious ways and outrageous ways, they are pulling strings on every form of information that crosses our path in daily lives," she explained.

So, how should news consumers respond as American colleges and universities crank out a new breed of political advocates, rather than unbiased journalists?

Whether it's news about COVID-19, an uncertain election, or other issues, Attkisson says people need to reject biased reporting and the stigma that comes from expressing alternate views.

"When they are trying to make you think that you're the only one who has some crazy view and you're not supposed to think it, you're not supposed to believe that scientific study – whatever it is, know that is not true...They only win, the propagandists, if you live your life inside the box that I call the internet and social media and the news," she explained.

"Make sure you have this reality check, listen to your cognitive dissonance, listen to your friends and neighbors and live in the world as it exists, not the one they are trying to create not this artificial reality."