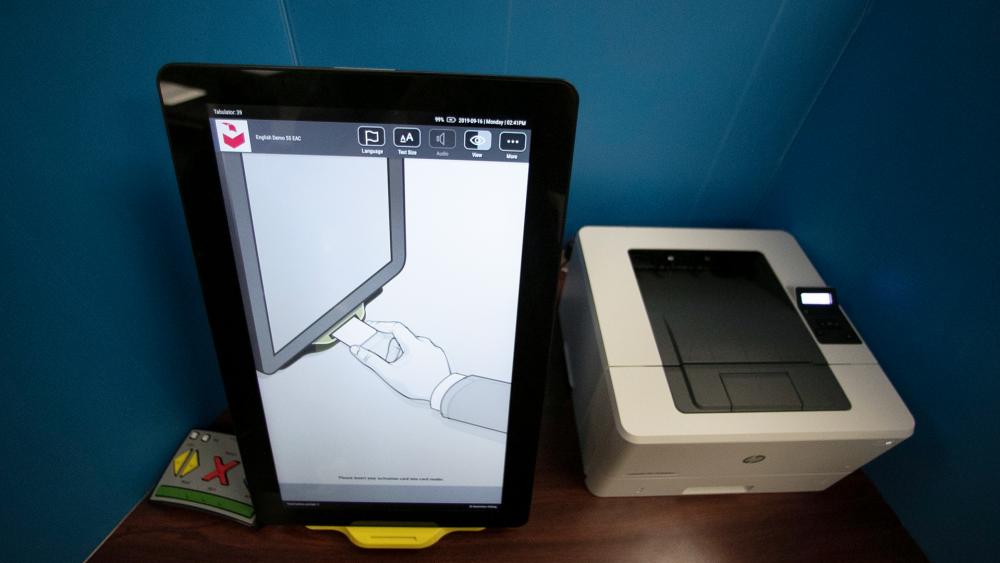 Another potential problem with Dominion Voting Systems machines is being raised. This time, apparently the memory cards on the company's voting tabulation machines are storage-limited, and at least one member of Trump's legal team is questioning the fact as "suspicious."

JustTheNews.com dug up this surprising revelation, reporting that Dominion warned Georgia officials prior to Election Day that the memory cards might need to be taken out of their vote tabulation machines before the end of the election to deal with a limitation in its system.

The actual correspondence between Dominion and state officials was obtained when the media outlet filed a public records request.

Officials confirmed on Thursday that more than three dozen memory cards were pulled from vote tabulating machines in the Atlanta metro area because they had all reached their counting maximum.  All of the cards were stored in a locked cabinet until after the polls closed, according to officials.

Dominion sent a "customer advisory" at the end of October, according to a "bulletin" that was sent to all county election officials from Chris Harvey, the state's elections division director.

The memo was obtained through a Freedom of Information Act request from JusttheNews.com to Fulton County, home to Atlanta, Georgia's largest city.

Harvey told county officials they had two choices in the guidelines outlined by the company. Officials were instructed "if they believe that a single ICP will reach 10,000 ballots cast," they were to "remove the original memory cards from the tabulator that has reached or is nearing maximum capacity" and then place a new memory card into the machine.

Harvey also directed officials not to close polls using the cards "until 7:00 p.m. on Election Night" and to "store the memory cards securely."

The instructions from Dominion told election workers to "remove the original memory cards and for store {sic} tabulation at the appropriate time." According to JustTheNews.com, the company did not mention anything about secure storage.

The Georgia Secretary of State's office declined to comment if they followed Dominion's memory card guidelines, but said it had endeavored to ensure the integrity of both Dominion's machines and the election in general.

"Due to the amount of races that were on the November 2020 ballot and the large number of early voting polling sites that we have in Fulton County, the Dominion ICX scanner had the memory to hold ballot images of about 5,000 ballots," the official said. "After my staff and I did the test to confirm that the max was 5,000 ballots, we consulted upper management and made the determination that we would swap out memory cards at 3,000 ballots. We swapped out memory cards 36 times during the early voting period."

"For security, each set of memory cards was placed in a secure memory card bag that was locked and sealed and then placed in a locked cabinet," the official continued. "The memory cards were locked in the cabinet until election night after the polls closed at 7pm. At this time the cabinet was unlocked, the seals were broken on each bag and each memory card was uploaded into the Election Management System for tabulation."

The media outlet then asked for the name of the official from Dominion who had given the statement and why the Fulton County machines only were able to handle half of the ballot capacity as the voting tabulators cited in Harvey's memo. Waller did not respond to the questions.

The memo brings new focus on memory card-related problems in the Peach State since the Nov. 3 general election.

In both Walton County and Douglas County, election officials discovered memory cards with several hundred votes on them several weeks after the election.

In Fayette County, officials found a memory card with more than 2,700 votes on it, and officials in Floyd County found an extra memory card containing 2,600 votes.

This was the first year that Georgia used Dominion's voting systems to tally its elections, according to JustTheNews.com.

Trump campaign attorney Jenna Ellis tweeted her response to the report. "Suspicious?" she wrote. "Dominion warned memory cards might need to be prematurely removed from voting machines in Georgia due to unreported system limitations."

Suspicious? Dominion warned memory cards might need to be prematurely removed from voting machines in Georgia due to unreported system limitations.https://t.co/s1UMmY7q4h