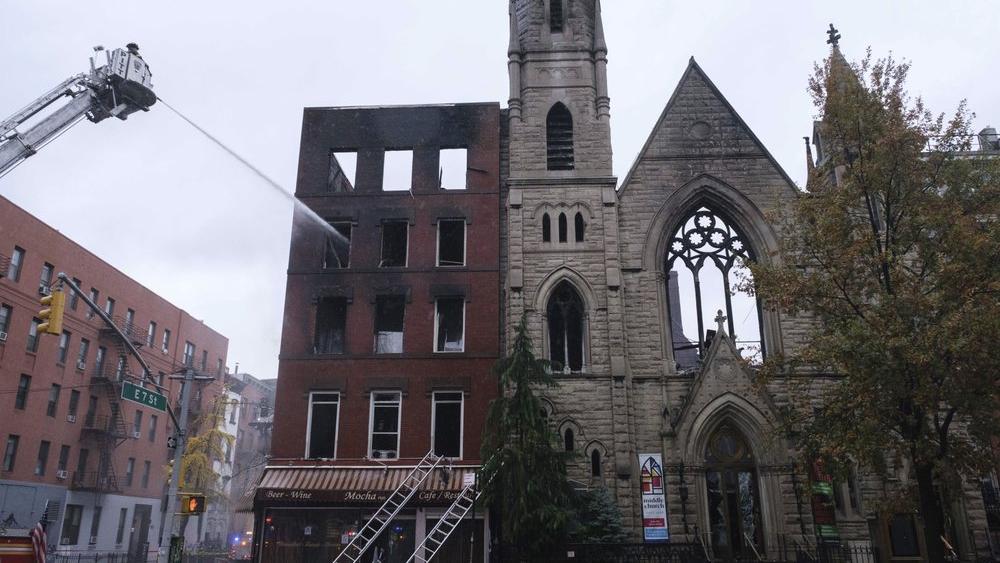 Firefighters work to extinguish a fire erupted from the building next to Middle Collegiate Church on Saturday, Dec. 5, 2020 in New York. (AP Photo/Yuki Iwamura)

NEW YORK (AP) — A historic church in lower Manhattan that houses New York’s Liberty Bell and whose congregation dates to the city’s earliest days was gutted by a massive fire early Saturday that sent flames shooting through the roof.

The Middle Collegiate Church in the East Village burned before dawn after a fire spread from a five-story vacant building adjacent to the church around 5 a.m. Flames shot from the roof and the church’s stately front window glowed from the conflagration inside.

“We are devastated. We are gutted like our building is gutted; our hearts are crushed like our doors are crushed,” said the Rev. Jacqueline J. Lewis. “But we know how to be the church, and we know that God is God, yesterday, today, and tomorrow.”

We are devastated and crushed that our beloved physical sanctuary at Middle Collegiate Church has burned.

And yet no fire can stop Revolutionary Love. pic.twitter.com/R8D3NVjAiY

We’ve been worshiping and doing our ministry in digital spaces since March and that’s what we’ll be doing tomorrow.

We pray for the first responders. We pray for our neighbors who are also affected by this fire. And we covet your prayers as we grieve.

City Councilmember Carlina Rivera tweeted that no injuries were reported.

Built in 1892, the church is home to the oldest congregation of the Collegiate Churches of New York, which dates to the Dutch settlement of the island in the 1620s, according to the church’s website.

The Middle Collegiate Church had been in two other locations in Manhattan since 1729.

The bell tower houses New York’s Liberty Bell, which pealed to mark the birth of the nation in 1776 and has since been rung for the inaugurations and deaths of American presidents and events such as remembrance of the Sept. 11 attacks, according to the church.

Lewis believed the bell survived the fire but was not certain. Church minister Amanda Ashcraft told WABC that the Tiffany stained glass windows were gone.

The fate of the church building is unclear, Lewis said, but the ministry will continue.

“Our church has been worshipping digitally since March 15,” Lewis said. “And that’s what we’ll be doing tomorrow.”