The Praying Surgeon: 'Lord...We Need You to Do a Miracle' 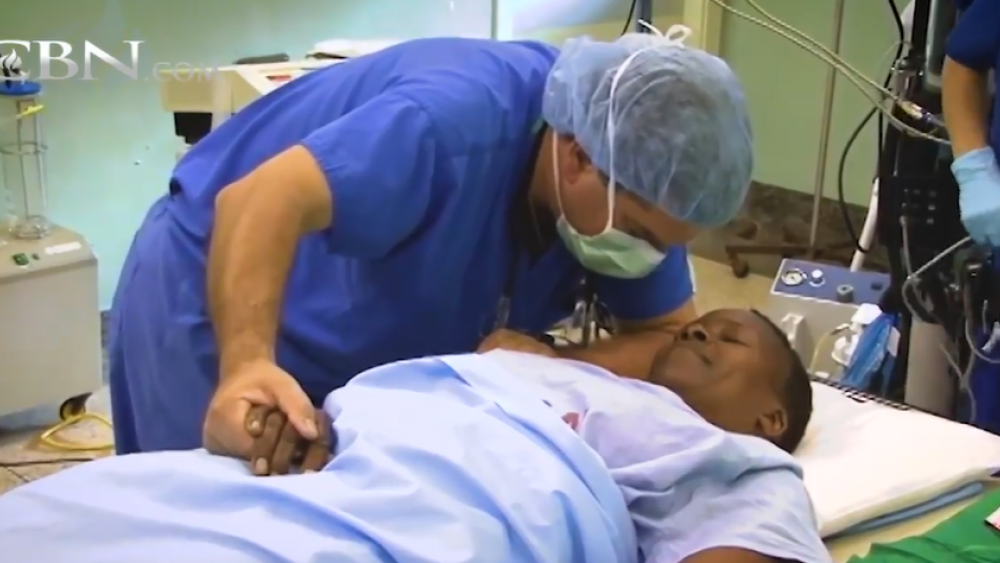 Do a search on the internet for prayer and medicine, and you'll find plenty of scientific studies that confirm what the Christian community has known for thousands of years…that prayer works.

"The anesthesiologist comes in the room and says, 'Mike, we're not going to be able to do the surgery,'" says Mike. "Why?" questions Mike. "'Cause his blood pressure is like 220/120. We can't put someone to sleep with that kind of blood pressure,'" says the anesthesiologist. "Well, at least let me pray for him before you cancel,'" says Mike. "He goes, 'Okay, fine, whatever.'"

Doctor Michael Haglund of Duke University is considered one of the top cervical surgeons in the country. He also enjoys another distinction—the praying doctor.

"So, I go on, and I pray for him, and he calms down a little bit. It went from 220 down to like 170," says Mike. "We do his surgery, he does great, pain's gone, gets back to work in two weeks, I see him at six weeks, and he comes in. He goes, 'You know that prayer you prayed for me?' And I go, 'Yeah,'" says Mike. "He goes 'Something changed. Something's different.'" And so like right there in the clinic we like prayed, and he accepted Christ and, you know, that's what it's all about," says Mike.

Dr. Haglund remembers the first time he witnessed the healing power of prayer. It wasn't long after he and his wife gave their lives to Christ, and he was on-call at a Seattle hospital.

"A young kid ten years old, bad snowboard accident, got air-flighted into Harborview Medical Center with a big epidural hematoma on his brain," says Mike. "If you can get it out quickly, they do really well, and they wake-up like right away after surgery, which is great, not like when you're in a bad car accident," says Mike. "So, we took him to the O.R. right away, we took it out, and he didn't wake-up, still in a coma. So I went to lay down and like I couldn't get to sleep, and I really felt the Lord put on my heart, I never felt this before, like this impression like, 'You need to go—you need to pray for him,'" says Mike. "And I go, 'Okay.' So, I rolled over in bed and started praying," says Mike. "And it was like, 'No, you need to GO pray for him.' So, I just went up and laid hands on him and said, 'Lord, you know we've done everything we can do, we need you to do a miracle. Amen,'" says Mike.

Fifteen minutes later, the nurse called him back into the ICU. After checking on his patient, Dr. Haglund ran and found the boy's father, an associate pastor of a church in Seattle.

And for more than three decades, Dr. Haglund's practice, and prayers have been changing lives. But his influence has reached beyond the bedside. As a renowned surgeon, Dr. Haglund has not only been able to talk about prayer with his peers on a scientific level but on a personal, spiritual level as well. Like Kimberly Stanley, a pharmaceutical professional, who met Dr. Haglund at a medical conference…

"I was really actually not wanting to go to this meeting, I just wanted to be at home. But, just really kind of lost and just knew that something was missing in my life," says Kimberly. "He began to help me connect those dots and just putting words to the gospel in a conversation was just so critical for me that somebody who didn't even know me would care to share that truth with me. It was just—it was life-changing, and I knew I needed to do something," says Kimberly.

What Kimberly did was give her life to Christ.

"He just led me in a prayer that was very simple," says Kimberly. "I can't remember the exact words, but it was just a very simple prayer, and I just immediately knew it was right. And I had heard that as a child and so I knew that's what had happened to me, that I had been born again, I had been saved from death to life," says Kimberly. "I think that that's the sweetness of our Lord is to send someone that I could look to and say, 'He believes. He believes.'"

As the top in his field, Dr. Haglund is well aware of the millions who've been helped through modern medical science. He also knows that it's the undeniable power of prayer that truly changes lives.

"Once you see how much God moves, you build that faith that He's there, He's ever-present, and He's walking through life with you. And you don't realize how many things He does if you kinda' look back a little bit," says Mike. "And, I think that builds your faith, right?"