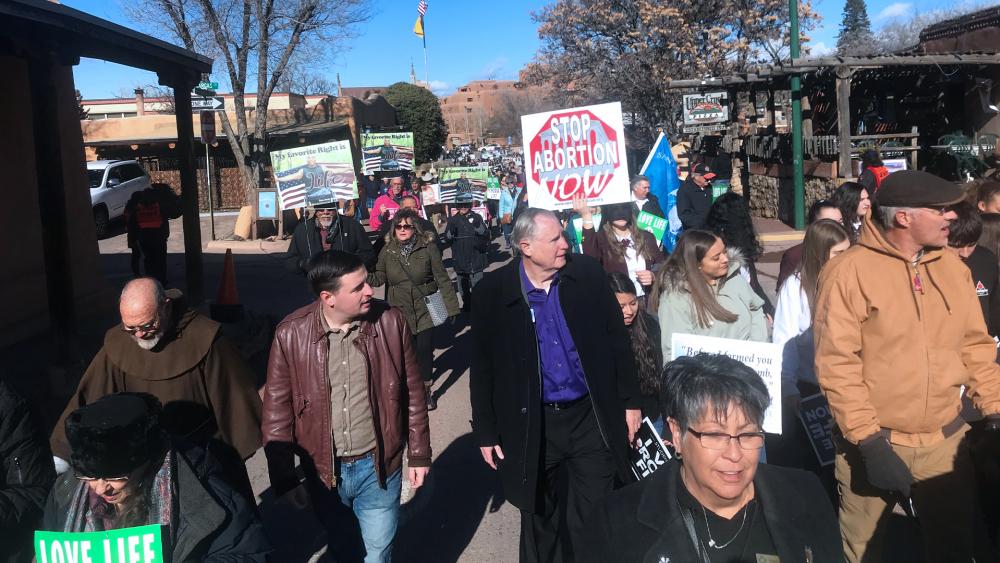 Across the US, bills aimed to expand access to abortion are on the rise and the southwest is no exception.

Liberal lawmakers in New Mexico are planning to re-introduce a new version of last year's House Bill 51, which would allow abortion-up-to-birth.

The bill removes conscience protections for health care professionals who believe it's wrong to abort unborn babies without any definitive state or federal protections. Also the bill gives physicians who are not licensed the right to perform abortions.

While lawmakers in New Mexico are making their pro-abortion efforts known, those who oppose the bill are ensuring their voices are being heard as well.

Pro-life advocates marched near the New Mexico State Capitol Building for Sanctity of Life Awareness & Unity Day on January 22 in Santa Fe vowing to continue the fight against legislation to decriminalize abortion in the "Land of Enchantment" state. Vince Torres, president of Family Policy Alliance of New Mexico, told CBN News that pro-abortion politicians are worried that the US Supreme Court will overturn Roe v. Wade. With that possibility on the horizon, legislators, including New Mexico Gov. Michelle Grisham (D), are making HB 51 a high priority.

"Codifying abortion up to the moment of birth in state law has become a top priority for the administration and progressive legislators. Gov. Grisham is working diligently behind the scenes to flip pro-life Democratic Senators and she has even floated the idea of calling a Special Session on abortion," Torres explained.

However, local churches and the pro-life community are continuing their efforts to pray together and to speak out about abortion.

Rev. Richard Mansfield with New Beginnings Church in Albuquerque also attended the Unity Day worship service. He asked God to forgive those who have had an abortion and prayed for pro-abortion legislators.

Torres noted that the majority of New Mexico is pro-life and oppose late-term abortion. He has seen a dramatic increase in involvement from churches and the pro-life community.

"Our pro-life rallies and events have drawn thousands of people and our engagement has prompted tens of thousands of phone calls and emails to our elected officials."

"We began to faithfully pray in accordance with Jeremiah 29:7 and we began to passionately act in accordance with Daniel 11:32," he said. "Last year, we experienced perhaps the most significant pro-life victory in our history, and I fully attribute this to the good Lord blessing the prayers and actions of His church." Evangelists, non-profit leaders, and legislators will gather from 12:00 pm to 2:00 pm, Feb. 14  in the rotunda of the New Mexico State Capitol for Pro-Life Lobby Day.

The event is being held in partnership with Right to Life of New Mexico and New Mexico Alliance for Life. Torres said the event will feature pro-life legislators and speakers, along with time set aside for prayer.

"Participants are encouraged to visit the Governor's office and their legislators' offices to express their opposition to legislation that would codify abortion up-to-birth in New Mexico law and express their support for pro-life legislation including a late-term abortion ban, born-alive infant protection legislation, and parental notification for minors seeking abortions," Torres concluded.

You can make your voice heard on this measure. Visit New Mexico Alliance for Life for contact information.