'We're Watching God Enter the Room': The Moment That Stunned the World and Reopened a Racial Debate 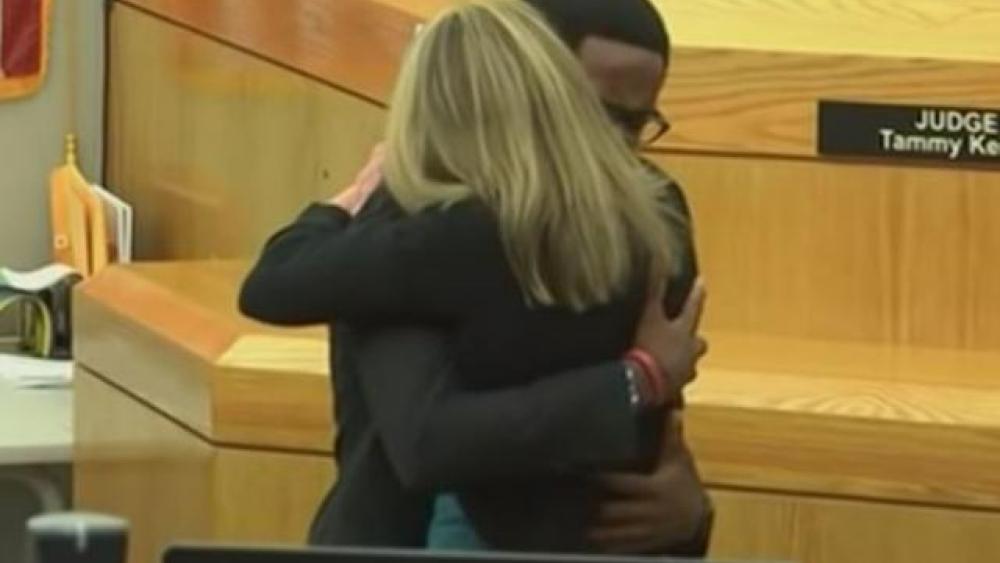 "I forgive you" – those three words uttered by a man to the police officer convicted of killing his brother caught the world off guard.

When 18-year-old Brandt Jean publicly forgave Amber Guyger, he made it clear that he was speaking for himself.

Still, many couldn't understand his act of grace. Even some Christians were conflicted.

The words came about a year after Guyger, a Dallas police officer, killed his brother, Botham Jean, in his own apartment.  After working a long shift, Guyger had somehow mistaken Jean's apartment for hers and shot him because she said she was afraid.

From a Dallas courtroom witness stand, Jean's little brother not only forgave Guyger but went a step further.

"I love you just like anyone else," Jean said. "I don't even want you to go to jail."

Then he turned to the judge.

The judge consented and Jean and Guyger embraced.

"When we watched Brandt Jean offer forgiveness in that courtroom, we're watching God enter the room because forgiveness like that is not a human act," said Pastor Bill Haley.

Haley leads Coracle, a ministry that focuses on spiritual development and action. Coincidentally, his Virginia property houses an old slave graveyard. Haley says racism led to death back then and today.

While Haley saw Brandt Jean's act as honorable, he understands why some were infuriated.

"Because black people are always being asked to forgive, and it's a lot to forgive," Haley said.

"In fact, I think the black church is the teacher for the country on what Jesus meant when he said forgive other people.  They've had a lot of practice," Haley said.

"I think too often, particularly in conservative Christian spaces, we can be very forgetful of the 500-year history of our country," said racial reconciliation advocate David Bailey.

Bailey says an expectation for blacks to forgive goes back to slavery. On top of that, he says, justice isn't just.

"If the black man killed that white police officer because he got confused about where he was, that's not going to be a thing," Bailey said. "That brother is going to jail for the rest of his life, might get the electric chair."

In this case, the judge sentenced Guyger to 10 years in prison.

"Ten years seems merciful," Haley said. "It seems so hard to have a police officer suitably punished for an action that is egregious and clearly over the line."

For Christians, this situation and others like it present a challenge.

"When you're a Christian, it just adds a new level of complexity because you've got to see both the sin and the effects of sin, the consequences of sin," Bailey said. "But then you also have to see the opportunity for grace and forgiveness through God."

"You took something very precious away from me," one victim's daughter told Roof. "I will never talk to her ever again. I will never be able to hold her again. But I forgive you."

It's not something Marquis Jefferson was ready to do in October of last year. An officer in Ft. Worth, TX shot and killed his daughter, Atatiana Jefferson, in her own home while she played video games with her nephew. Soon after, her father made this declaration.

"I don't want no hug," Jefferson said. "That's my one and only daughter. I'll never forget this."

Sadly, Jefferson died just one month after his daughter was killed. He suffered a heart attack, literally dying from a broken heart.

Bailey says Brandt Jean's offer of forgiveness was more for him than the officer.

"For that brother to walk around with unforgiveness is like drinking poison and hoping the other person dies," Bailey said.  "That brother needs to be free and so he did that for him, and he did that out of his relationship with God."

In many cases, whether or not a person receives the grace of forgiveness has nothing to do with how they're punished from a legal perspective. It can, however, have an impact in the court of public opinion.