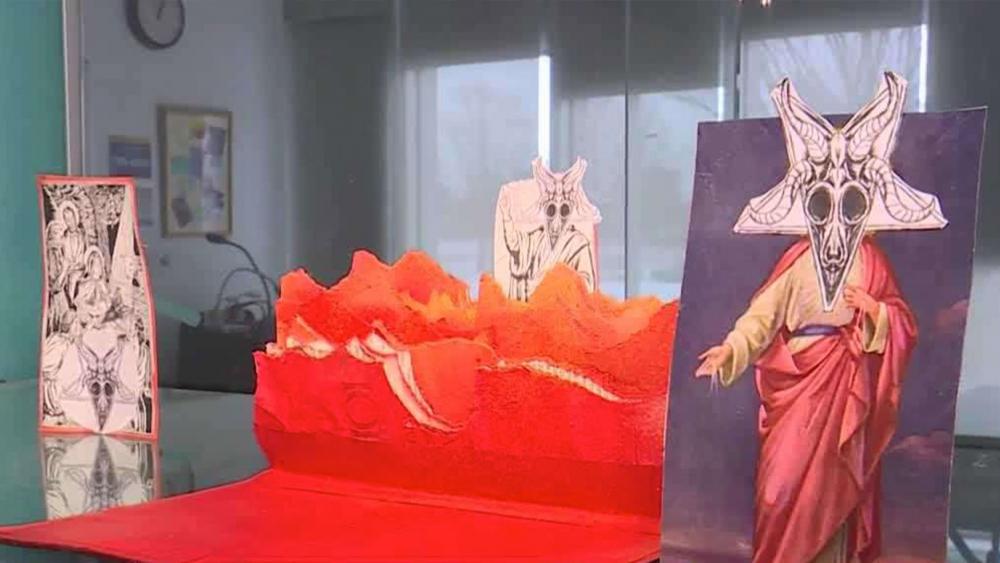 A university is promoting the display of a student's art project depicting a desecrated Bible, and that has Christians asking "why?"

Riley Harris, a student at The University of Southern Maine, created the display for a class assignment. The purported intent was to transform a book into something new.

He explains that the piece is called "Unholy Bible: Very Revised Standard Edition." It reflects the head of Christ covered with a satanic image and includes torn pages from the Bible.

"He actually ripped pages out of the Bible and painted them to look like flames from the lake of fire. Then he took portraits and paintings and Christ and in place of the face of Jesus he placed a satanic image. You can actually see the nativity scene with Mary cradling the Christ child and there is an evil satanic face on the Christ child," Starnes said.

Harris, who considers himself an atheist, said the purpose of his exhibit was to question authority.

"I was thinking a lot about questioning authority in general," Harris said. "People question different types of authority, but for some reason, religious authority seems too taboo to question, so I thought I would give it a shot."

CentralMaine.com reports the exhibit is on display in a building on campus where community groups and church members meet.

"I think it's very inappropriate and repugnant," Casco Bay Church of Christ member Charlie Flynn said. "This is someone's sacred text being desecrated destroyed and displayed in a public place."

But the university supports Harris and affirms that he is not violating any rules.

"The university supports freedom of speech rights for all students, affirmed and upheld by Board of Trustee System Policy 212," the school said in a statement.

The policy indicates, "The Board of Trustees is committed to protecting the rights all University community members share to free speech, which includes free expression and assembly."

Flynn said the exhibit is not about freedom of speech and considers the piece hateful.

"If I saw a Koran with pig blood on it I would certainly call someone or a Torah with unclean foods on it," he said. "This is a Bible with Satan's image put over Jesus' image and around Christmastime."

Harris doesn't feel his piece is harming anyone, only making people think.

Starnes says this act would not be tolerated if it were a different religion or religious symbol.

"Here in the United States of America, only Christians and Jews are allowed to be attacked for their religious beliefs. It is highly improbable that you would see a university like the University of Southern Maine approve of a desecrated Koran or allow a student to take pictures of the prophet Mohammed and place a satanic image on those kinds of things."

"I don't think the university would be hollering about free speech and freedom of expression if that were the case," he says.

Starnes adds that protesting and marching against the exhibit will not resolve the issue, contending that donors, sponsors, and the business community should call the university and warn that funds will stop if people of faith continue to be attacked.