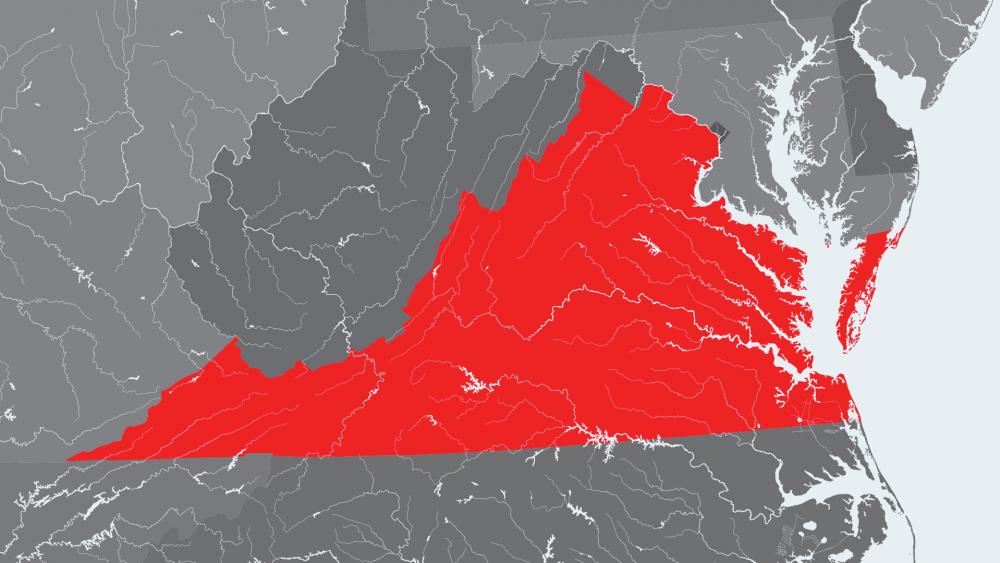 In a proposal the Richmond Times-Dispatch has dubbed "Vexit," West Virginia's Republican Governor Jim Justice invited Virginia counties upset over the liberal government in their state capital to secede to West Virginia. The governor gave the invitation at a press conference held with Liberty University President Jerry Falwell, Jr. at a community college in Martinsburg, West Virginia on Tuesday.

Many Virginians are not "happy" since last fall when, for the first time in more than 20 years, Virginia Democrats regained full control of the government in Richmond. Since taking office this month, they've set to work dismantling laws protecting the rights of gun owners, and as CBN News has reported, removing restrictions on abortion designed to protect the unborn and their mothers. The Wall Street Journal reports, too, they are proposing to repeal the state's 70-year old right-to-work law which would force workers to join a union, force them to pay dues and deny them the long-held freedom to choose whether to be part of a union or not.

Thousands of gun owners concerned about their freedom gathered for a rally on the Capitol grounds in Richmond on January 20th to lobby against the proposed legislation, part of which if signed into law, would have made many of them felons overnight due to the kind of weapons they owned. Fearing the loss of their freedoms, in the months since the election, citizens have flooded city council meetings all over the Old Dominion, resulting in some 91 of Virginia's 95 counties declaring themselves Second Amendment Sanctuaries. They have issued statements affirming their support for the Second Amendment, with some declaring they will refuse to enforce gun laws that go against it.

Oddly enough, the idea of Virginia counties seceding to another state is not a new one. In 1863, West Virginia became a state formed from western counties of Virginia that opposed Virginia's decision to secede from the United States. In fact, West Virginia is the only state created by seceding from a Confederate state.

Asked for a reaction to West Virginia's proposal that Virginia counties join their state, Virginia Democrat Governor Ralph Northam's office responded it "sounds like it's an election year in West Virginia," The Hill reports. Virginia Senate Majority Leader Dick Saslaw (D), who at one point had called for a ban on so-called assault weapons in the Commonwealth, described the secession proposal "preposterous," saying West Virginia should focus on fixing its high poverty rate.

Minority leader in the House of Delegates, Todd Gilbert, told CBN News many Virginians all across the state are not happy with the Democrat agenda, but Republicans, he said, are not even close to retreating from the political fray in Richmond, even though he did seem to appreciate West Virginia's offer.

"We're nowhere near done fighting for our values here in the Commonwealth. Democrats have been in power for less than two months and they're already raising taxes, working to let violent felons out of jail early, and punishing law-abiding gun owners. We think Virginians will have a significant case of buyer's remorse very soon. That being said, it's always nice to have options."

But concern by Virginia conservatives over the leftist tilt of their state government is not going away.

"What's happening in Virginia right now is a tragedy in the making," said Falwell. "Democrat leaders in Richmond, through their elitism and radicalism, have left a nearly unrecognizable state in their wake, and they are using their power to strip away the God-given rights held by every person in the state, despite their due protections under the US Constitution."

So could it really happen that what is now part of Virginia could become a new part of West Virginia? According to Fox News, Falwell said lawyers he had consulted said even if Virginians wanted to, secession would be a very difficult process. Virginia counties would need to conduct petition drives, followed by a referendum. If successful, the proposal then would go before the Virginia General Assembly. University of Virginia law professor Richard Schragger told the Times-Dispatch the move was "certainly a long shot," and would require the consent of Congress and both states.

For their part, lawmakers in West Virginia already have introduced formal resolutions inviting parts of Virginia to join their state.

What is clearly evident, Virginians worried about the direction of their state may not want to secede, but if attendance at city council meetings is any gauge, more and more of them are getting involved in fighting against what they see as a shocking erosion of their freedom.