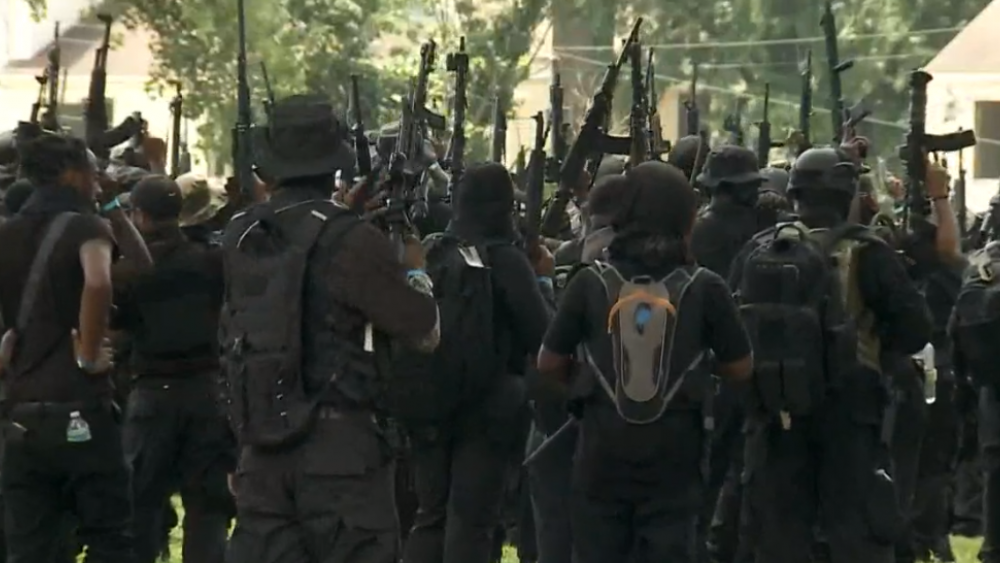 An armed militia group took to the streets of Louisville, Kentucky on Saturday as part of an organized response demanding justice for Breonna Taylor. The 26-year-old black emergency medical technician was fatally shot on March 13 during a nighttime police raid in her home as she watched television with her boyfriend. Police had been conducting a drug investigation in the area. No drugs were found in her apartment.

Dressed in all black and carrying assault rifles, members of the NFAC, which stands for "Not F****** Around Coalition" say their protests send a specific message: "we need an answer."

The NFAC's leader, Grandmaster Jay said the group is protesting against the ongoing investigation into Taylor’s death and the lack of results. The three police officers involved in the shooting have not been arrested or charged.

Grandmaster Jay called on members to return to Louisville in four weeks' time and "burn this *@#! down" if the investigation was not complete and to demand "the truth."

He added, "Once it gets to that point where it looks like the government is non-responsive to the will of the people, the Constitution says to form the militia to address the grievances of the people. I didn't write it. They wrote it. We just abide by it. So that's our next destination because when it looks like the government is being indifferent to the people, the people have the right to form themselves - and arm themselves - to ask those questions."

Before the march, a member of the group accidentally discharged her weapon during an inspection. Three NFAC members sustained non-life-threatening injuries as a result of the incident and were taken to the hospital.

Louisville Metro's interim Chief of Police Robert Schroeder said in a statement, "three people were struck by gunfire as the result of a discharge of someone's gun who was participating in the NFAC demonstration.

"This is a tragic situation that could have been much worse," Schroeder added. "I encourage anyone choosing to exercise their Second Amendment rights to do so responsibly."

The NFAC leader told his members to protest peacefully and refrain from pointing their guns at anyone unless someone took aim at them first.

"Do not point your gun at anyone unless they point their guns at you," Grandmaster Jay said. "Then kill them, do not shoot them, kill them."

The militia marched in formation throughout the city, chanting and repeating profanity led by their grandmaster.

A local protester said she appreciates the effort from the NFAC, but more work needs to be done before there is a change.

"After the NFAC leaves, we still have to work with our city leaders, police department, and our metro council to improve the systems here," she said.