Have We Reached the End of the Handshake? In Its Place, the 'He-Man Greeting Ritual' 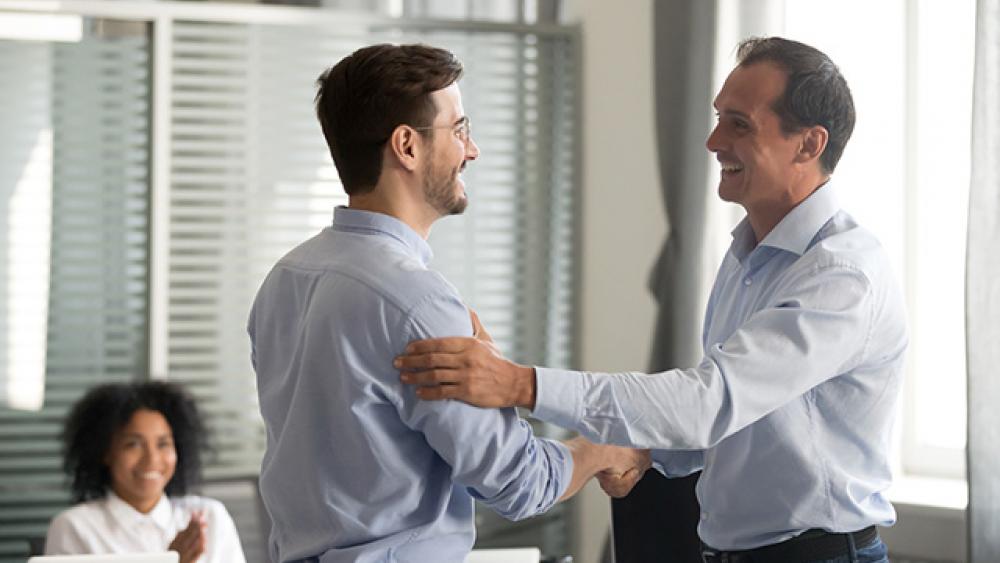 In this era of pandemics and social distancing, the handshake might be on its way out.

The handshake is the centerpiece of political life, and old habits die hard, especially in politics.

"Okay, I like that," said President Donald Trump, bumping an elbow with an executive after reaching for his hand and adding, "That's good."

Since that day on March 13 when the President declared a national emergency due to the coronavirus, the handshake has become faux pas.

"Handshakes are the worst," said Jerry Seinfeld, adding in his eponymous show that "there's absolutely no guidelines for handshakes."

"Sometimes a guy will give you a strong grip, late release, and pull you in for the too close conversation," said Seinfeld. "To him I say, that's 3 strikes, you're out!"

Griping about the perfect grip has long been a comic's pastime, and the custom of clasping hands that Seinfeld confronted in the 1990s dates back to the Ancient Greeks.

"It started thousands of years ago," said Patti Wood, a nationally recognized body language coach and an expert on the handshake.

"It was originally an arm clasp so you would clasp the entire other person's arm from here to here," said Wood, grasping the inside of each elbow in her hand. "I'm putting out my weapon to show you I'm not going to kill you," she explained, adding that it also "made it harder for them to kill you."

That was then. Now, shaking hands is a different story.

"A handshake is actually equal to 3 hours of continuous face to face interaction and its ability to establish rapport," said Wood.

Without that joining together of hands, people are resorting to other ways of signaling good intentions.

From the practical alternatives, like the friends shown shaking rubber hands attached to extendable poles in a YouTube video from the sports tricksters Dude Perfect, to magical possibilities in the same video, like pointing a magic wand.

Men dunk hands in a tub of hand sanitizer in that video to demonstrate a chemical solution before shaking hands.

Other people are letting their feet do the work of their hands.

"The Wuhan shake" demonstrated on "The Late Show" on CBS is the act of tapping the insides of feet together.

A doctor in Oregon danced in a TikTok video to show the "Coronavirus Foot Shake".

But fancy footwork is no match for grasping hands. "When you shake hands, the physical touch; you actually in that handshake are exchanging chemicals, and to get down to the deep science those chemicals act as a mnemonic device and a memory device," said Wood.

"You're more likely to remember that person because of that chemical read that you get from them," she said, adding that, "and then deeper, you're actually getting some genetic information about that person's health."

It's also a great way to spread diseases like COVID-19. Dr. Anthony Fauci with the White House Coronavirus Task Force has suggested an end to the handshake.

"We don't need to shake hands," said Dr. Fauci in an April interview with the Sinclair Broadcasting Group, adding that "We've got to break that custom."

As athletes start to take the field again, the elbow bump has become the go-to greeting in the stadium.

And in the political arena, ahead of interviews with the Vice President, the Surgeon General, and the White House Press Secretary, CBN News reporters have been caught on tape bumping elbows.

A temporary replacement that Woods calls the "He-Man greeting ritual, to say, 'Hey, I'm willing to take this much risk'."

Woods said that even the elbow bump is too close for a lot of people right now. She's giving people some other options like signaling a hug, or extending a wave, or even a bow, at least until medical professionals say it's safe to shake hands again.

For now, that will have to do, but nothing will ever seal the deal or the friendship, like a handshake.