'Isaias' Unleashes Flooding, Landslides in North Caribbean, on Track for US East Coast 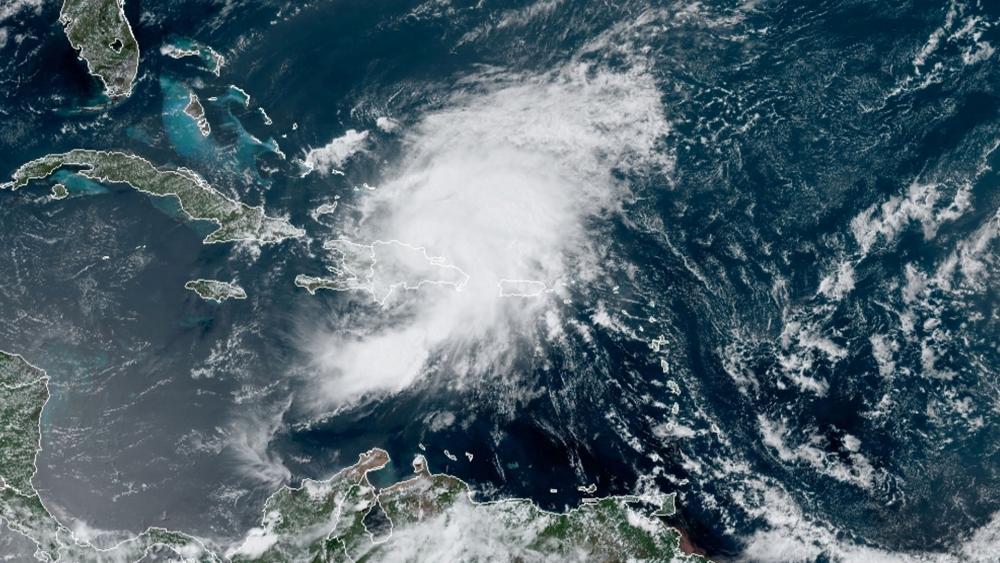 6176771009001
'Isaias' Unleashes Flooding, Landslides in North Caribbean, on Track for US East Coast

SAN JUAN, Puerto Rico (AP) - Tropical Storm Isaias battered Puerto Rico and the Dominican Republic on Thursday as it continued on a forecast track toward the U.S. East Coast. The storm unleashed small landslides and caused widespread flooding and power outages on an island still recovering from previous hurricanes and earthquakes.

The storm's maximum sustained winds of 60 mph (95 kph) also toppled trees and some telephone and electrical cables across Puerto Rico.

Especially hard hit was the territory's southern region, which still shakes daily. Santos Seda, mayor of the southwest coastal town of Guánica, told The Associated Press that he has received reports of downed trees and inundated neighborhoods where earthquake-damaged homes still stand.

“The emotional state of people is deteriorating more every day,” he said.

Isaias was centered about 85 miles (140 kilometers) southeast of Puerto Plata, Dominican Republic early Thursday afternoon, according to the U.S. National Hurricane Center. It was moving northwest at 20 mph (31 kph), and its center was forecast to move near the southeastern Bahamas by early Friday.

Isaias was already toppling trees in the Dominican Republic as government workers in some impoverished neighborhoods used loudspeakers to urge people to evacuate ahead of the worst of the storm. Police also arrested a handful of surfers in the capital of Santo Domingo accused of violating government storm warnings.

Meanwhile, Isaias knocked out power to more than 400,000 clients across Puerto Rico, including hospitals that switched to generators, and left some 150,000 customers without water, according to government officials. Meanwhile, crews opened the gates of one dam that last month had such a low water level it led officials to cut service every other day for some 140,000 customers. Outages also were reported in the neighboring U.S. Virgin Islands.

This #ThursdayMorning, the #GOESEast is watching #TropicalStormIsaias, the 9th named storm in the Atlantic of 2020, which formed Wednesday over the Caribbean Sea. It is the earliest "I" storm on record, previously set by Irene on Aug 7, 2005. https://t.co/1L8q1zg4eW pic.twitter.com/afxIS96SE1

Minor damage was reported elsewhere across Puerto Rico, where tens of thousands of people still use tarps as roofs over homes damaged by Hurricane Maria in September 2017.

José Pagán, a 22-year-old who lives in the eastern mountain town of Juncos, said his power went out before dawn.

“I didn't think it was going to be this strong,” he said of the storm, adding that his home is slightly flooded. “It's a rather difficult experience because it reminds us of Maria.”

More than 50 people sought shelter in Puerto Rico, said Gov. Wanda Vázquez, who urged those living near swollen rivers to find refuge and said officials rescued at least one family from rising waters. Many remained wary of shelters, however, given a spike in COVID-19 cases on the island.

In the western town of Mayaguez, Alan Rivera, a 40-year-old engineer, told the AP that the street in front of his house turned into a flowing river - something that didn't even happen during Hurricane Maria. He and his family planned to temporarily move in with his parents despite concerns about the coronavirus.

“We have to take the risk,” he said. “There's no other alternative.”

U.S. President Donald Trump approved an emergency declaration in Puerto Rico as a result of the storm.

The hurricane center said Isaias, for now, is not expected to become a hurricane before reaching the U.S. mainland.

Tropical storm warnings were issued for the Turks and Caicos Islands and portions of the Dominican Republic, Haiti and the Bahamas.

Isaias was expected to produce 4 to 8 inches (10 to 20 centimeters) of rain across Puerto Rico, Dominican Republic and northern Haiti, with isolated maximum totals of 10 inches (25 centimeters).

So far this year, Cristobal, Danielle, Edouard, Fay, Gert and Hanna have also been the earliest named Atlantic storms for their alphabetic order.