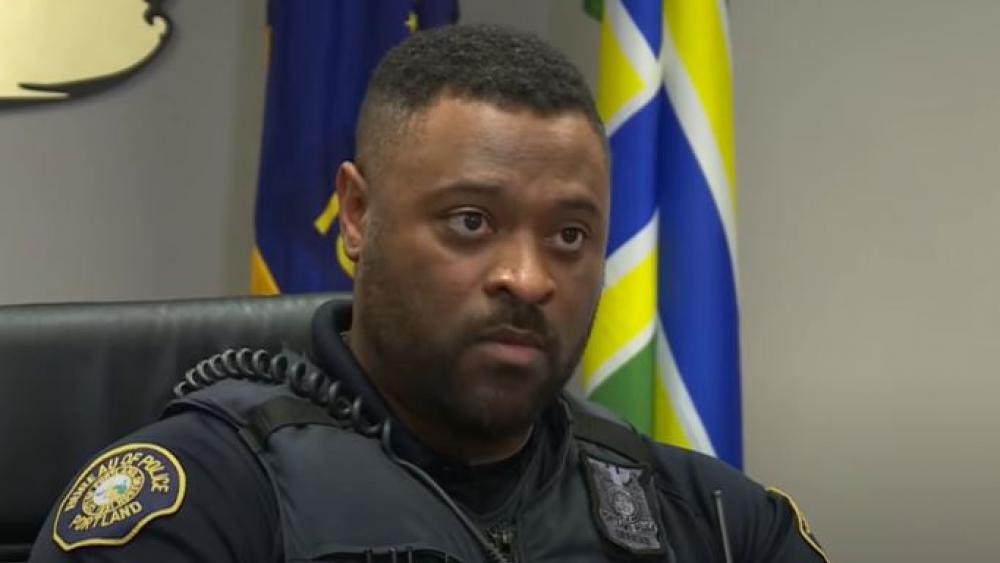 Officer Jakhary Jackson of the Portland Police Bureau offered his perspective as a Black officer in the middle of downtown Portland’s nightly protests, and it’s compelling to listen to from start to finish.

He details how white protesters have hurled racial insults at him, violently attacked with explosive devices, and labeled white officers racists “without even knowing anything about them.” Jackson labeled such baseless accusations as “disgusting.”

The entire conversation is about 27 minutes long and well worth the listen, especially hearing insights into regular interactions he’s had with white protesters who, when he confronted them, said they “were told” to interrupt and demean police when minorities try to engage in conversation.

Jackson also described surviving a horrific and surprise explosive attack, in which protesters hurled a device that landed in close proximity.

He said the blast was “powerful” and could be felt 10 feet behind him. “I feel lucky I didn’t get seriously injured. I was told people were taping marbles and rocks to these explosives,” he said after describing the terrifying assault.

“To think that someone has that much anger and hatred, they don’t even know someone, to throw something like that, and not care. It’s sad. It really is.”

Jackson went on to discuss the “bizarre” nature of the protests, which often feature more minorities on the side of police than white people.

“It says something when you’re at a Black Lives Matter protest and you have more minorities on the police side than you have in a violent crowd,” Jackson explained. “You have white people screaming at black officers, ‘you have the biggest nose I’ve ever seen!’ You hear these things and you go, ‘are they gonna say something to this person?’ No.”

Jackson said white protesters are often condescending and will scream at them about quitting the police force. “Having people tell you what to do with your life, that you need to quit your job. Saying you’re hurting your community but they’re not even part of the community. And you as a privileged white person telling a person of color what to do with their life –and you don’t even know what I’ve dealt with or what these white officers that you’re screaming at — you don’t know them. You don’t know anything about them,” Jackson said.

He went on to explain that while there are bad people and bad officers, he’s personally seen the white officers he works with save lives of all people, no matter their skin color. So it baffles him that strangers would call them racist without knowing anything about them.

“There are racists in the world. There are bad cops out there in the world. We don’t associate with those people, they make us all look bad. That’s not something that I stand for or my co-workers stand for,” Jackson said. “I’ve been called the n-word, I can’t even count, in the time I’ve been a police officer.”

Jackson went on to say that his fellow white officers see these racist interactions and are shocked — often stepping in to condemn the offender. “White officers jump in and defend me,” he explained. But despite firsthand knowledge of their opposition to racism, white protesters don’t seem to care. “They’re accused of being racist when I’ve seen those officers helping people of color, getting blood on them, trying to save someone’s life that’s been shot in gang violence… and they’re truly trying to help save someone’s life and they’re turned around and called a racist by people who have never had to put themselves out there. It’s disgusting.”

Jackson also expressed confusion and bewilderment at the failed logic and thoughtlessness from white protesters, who would frequently interrupt any conversation he attempted to have with people of color in the protests.

“I got to see folks that really do want change like the rest of us that have been impacted by racism,” Jackson began. “Then I got to see those people get faded out by people that have no idea what racism is all about. Never experienced racism. That don’t even know, the tactics they are using are the same tactics that were used against my people. They don’t even know the history. They don’t know what they are saying,” he said.

“Coming from someone who graduated from PSU with a history degree, it’s actually frightening. They say if you don’t know history you’ll repeat it, and watching people do that to other people… a lot of times, someone of color, black, Hispanic, Asian, come up to the fence (at the nightly protests) and directly want to talk to me. ‘Hey, what do you think of George Floyd? What do you think about what happened about this?’ Someone white comes up, ‘F the police, don’t talk to him!’ That was the most bizarre thing,” Jackson explained. “I even had a young African American girl say ‘why isn’t you guys aren’t talking to us?’ I said, ‘honestly, every time I tried to have a conversation with someone who looks like me, someone white comes up and blocks them and tells them not to talk.’ And then right when I said that, this white girl popped right in front of her. She said ‘He just said that was going to happen!’ I said, ‘I told you. Told you.'”

Jackson eventually confronted this white protester and her response spoke volumes about a lot of what we’re seeing play out across the nation today.

“And she (black female protester) looked at the (white) girl and said, ‘why’d you do that?’ I said ‘I’ve been called the n-word. She’s been called the n-word. Why are you talking to me this way? Why is it you feel you need to speak for her when we’re having a conversation?’ And she couldn’t answer my question. All she said was ‘someone told me to do it.’ That has been a very strange thing to watch.”

The fact that someone told the young woman to interrupt conversations between minority protesters and minority police officers is an eye-opening revelation. This implies some kind of hierarchy with instructions being handed down is in place for this protest, at a minimum. There was no further information in this video as to who the players in that dynamic could be.

It wasn’t all bad news, however. Jackson did share some positives he’s seen, including “two brothers” who were running around with trash bags cleaning up the city. “We’re from here,” they said, before explaining they weren’t going to let outsiders come in and trash the city. “I was impressed. I went over to shake their hands,” Jackson said.