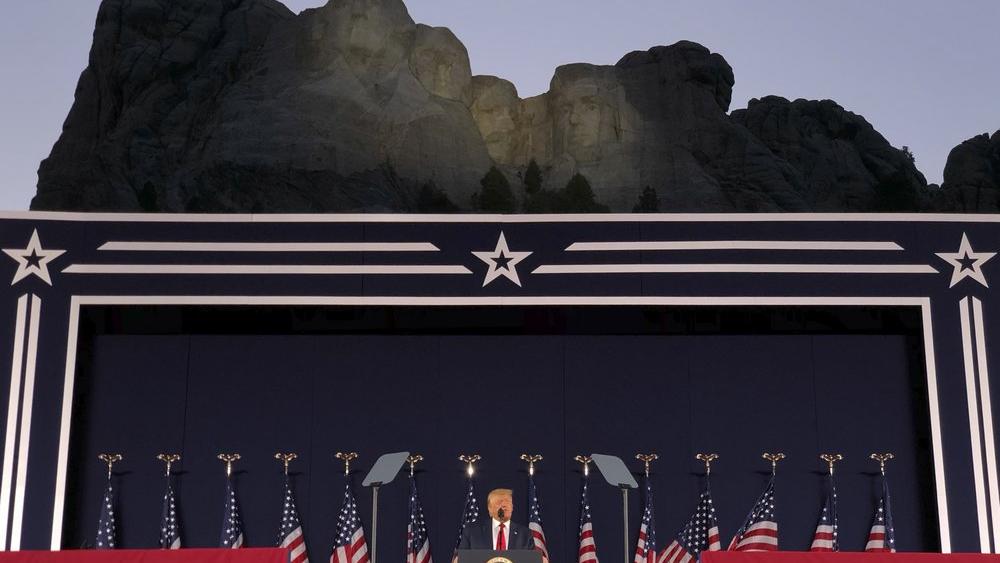 President Donald Trump on Friday addressed the nation from Mount Rushmore in South Dakota. He spoke in celebration o the birth of American independence and our nation's history.

The president began his speech by highlighting the country's achievements in the pursuit of liberty and justice - all made possible by the signing of the Declaration of Independence.

"The 56 patriots who gathered in Philadelphia, 244 years ago and signed the Declaration of Independence, enshrined a divine truth that changed the world forever when they said 'all men are created equal,' Trump said. "These immortal words set in motion the unstoppable march of freedom. Our founders boldly declared that we are all endowed with the same divine rights given to us by our Creator in Heaven and that which God has given us, we will allow no one ever to take away - ever."

"Every American family should cheer with delight and every American patriot should be filled with joy because each of you lives in the most magnificent country in the history of the world and it will soon be greater than ever before," he added.

Trump's speech shifted from freedom to the rioters he and many others believe are attempting to erase our nation's history and values by vandalizing monuments and destroying statues.

"Our nation is witnessing a merciless campaign to wipe out our history, defame our heroes, erase our values, and indoctrinate our children," he said. "Angry mobs are trying to tear down statues of our founders, deface our most sacred memorials, and unleash a wave of violent crime in our cities."

He declared that Mount Rushmore, which represents liberty and hope for people of all cultures and backgrounds, will never be degraded.

Also, President Trump announced that he is signing an executive order for a new monument that will feature statues of several presidents as well as other historic figures, including Davy Crockett, Amelia Earhart, Billy Graham, Harriet Tubman and Orville, and Wilbur Wright.

"The National Garden of American Heroes", a vast outdoor park featuring statues of "the greatest Americans to ever live, should be opened to the public by July 4, 2026.

President Trump added, "Those who seek to erase our heritage want Americans to forget our pride and our great dignity so that we can no longer understand ourselves or America's destiny. They would tear down the beliefs, culture, and identity that have made America the most vibrant and tolerant society in the history of the Earth."

"Mount Rushmore will stand forever as an eternal tribute to our forefathers, and to our freedom," he pledged. "This attack on our liberty, our magnificent liberty, must be stopped, and it will be stopped very quickly."