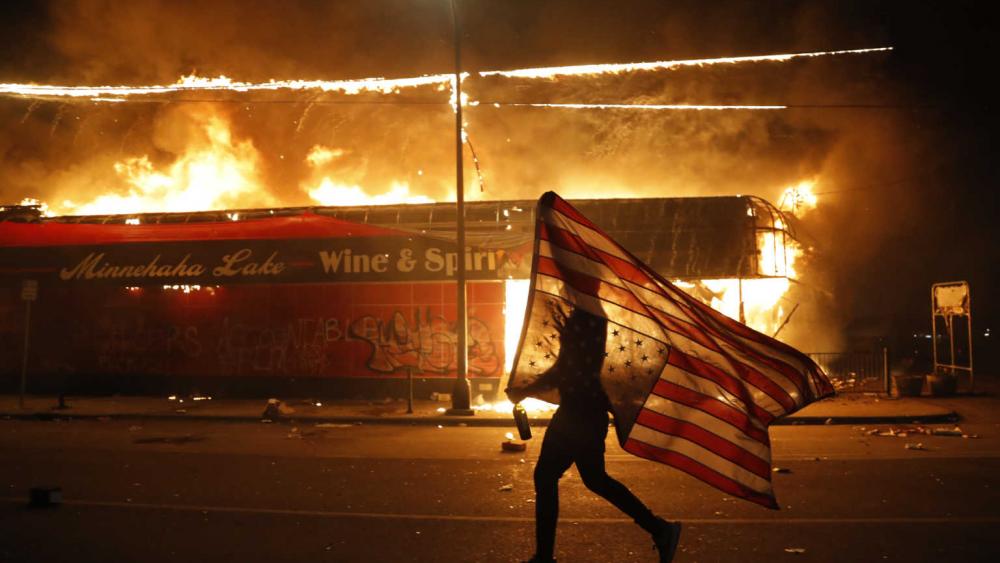 If you grew up in the ’90s, you remember those popular “WWJD” bracelets. Those letters stood for the question: “What would Jesus do?” These days, according to some, the answer is rioting, looting, and burning.

A tweet from comic book artist Dean Trippe equating the violent riots to Jesus overturning the tables in the temple has gone viral and is (for some bizarre reason) gaining a lot of traction among Christians.

"Destruction of property is not a valid form of protest"

Trippe is suggesting Jesus would be on board with the violence that has led to the destruction of countless minority-owned businesses, has resulted in the looting and burning of stores, restaurants, and even homes, and has sparked the murder of black law enforcement officers and peaceful protesters.

To make his case, Trippe referenced the accounts in Matthew 21:12-13 and John 2:13-17. When Jesus arrived at the temple in Jerusalem, he found it in bad shape. Money-grubbers had overrun the house of worship and turned it into a marketplace. In response, Jesus drove them out, saying, “My house will be called ‘a house of prayer,’ but you are making it ‘a den of robbers.’”

FAITHWIRE: Whoopi Goldberg Pleads for Violence to Stop: ‘I Don’t Think This Is What George Floyd Would’ve Wanted’

There is no similarity between that and the violence happening today.

As explained by Jeff Durbin, pastor of Apologia Church in Tempe, Arizona, the comparison is “ignorant on a number of levels and it shows that proof-texting can be deadly.”

“Trying to compare that — Jesus removing the corruption and pointing to the corruption and destroying the temple itself because of the sin there … — to what’s happening today?” he said. “I don’t think so. It shows an ignorance of what the Bible teaches, completely.”

Durbin furthermore rightly pointed out Jesus was cleansing His temple. He is God and has every right to clean His own home. He didn’t violate anyone’s rights.

“It’s Jesus’ house He was cleansing,” the pastor said. “The idea that you could then turn that into looters going into other people’s houses and businesses and destroying them is absolute insanity and it shows a total ignorance of the biblical worldview. It was His house.”

The Arizona preacher then went on to share a hard truth about the violent riots breaking out in major cities across the country.

“When I see people professing the name of Jesus inciting riots and looting and adopting the Marxist ideology of conflict between classes and groups and trying to help with that and trying to put a Christian veneer over it,” Durbin said, “I wanna say that I am disgusted by it.”

Throughout the video, the pastor talked about how much God abhors racism and made the case that Scripture “is really, really clear about victims’ rights.”

Durbin also called out the hypocrisy of the rioting.

“You can’t say you’re concerned about the abuse of an image-bearer of God then go about the enterprise of abusing other image-bearers of God,” he said. “Doesn’t work. Here’s the thing — I don’t believe you. I don’t believe you. I’m not convinced, whatsoever. I see through the lie. I see through the wickedness. And I know the only answer is Jesus.”

“I don’t mean that as a pithy, stupid Christian saying,” Durbin continued. “God is holy; we’re sinners. We’re rebels against a holy God. We deserve hell. And all this stuff you see in our nation right now is an expression of the evil and wickedness that comes from within people’s hearts. It’s coming from deep down within and the only escape from that is through repentance and faith in Jesus Christ.”