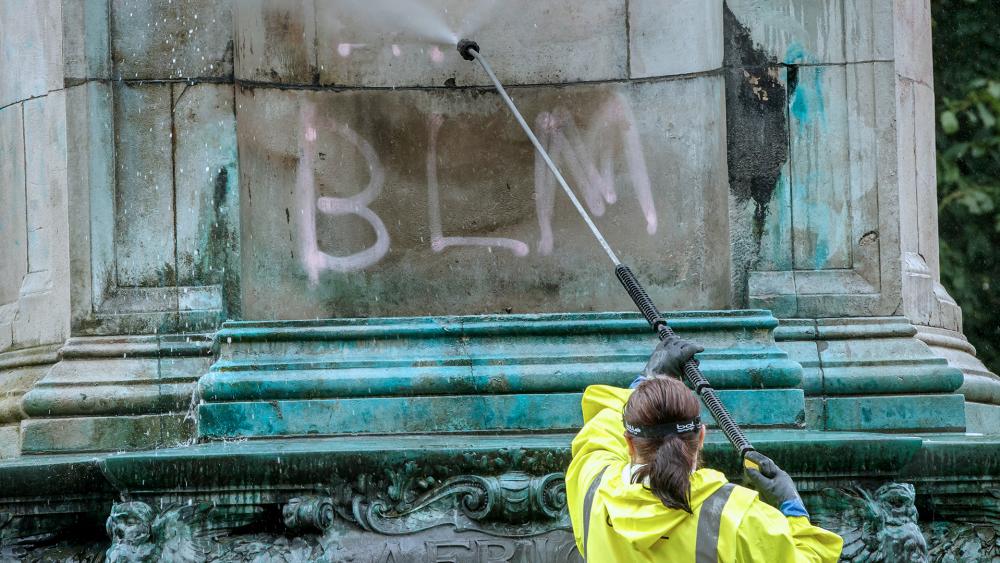 ABOVE:  Some of the protests over racial injustice have resulted in statues being defaced and forcibly or otherwise being taken down across the nation. Some of the attacks against statues of historic figures don't seem to make sense, like the one of an abolitionist in Philadelphia, PA. CBN News' Mark Martin spoke with Faithwire's Dan Andros about these actions that seem to involve a certain group who wants to delete figures from American history.

Faithwire airs at 9:30 pm tonight on the CBN News Channel.

On Wednesday, protesters wrecked a statue of Philadelphia abolitionist and philanthropist Matthias Baldwin. They defaced the face of the statue, covered it in paint, and scrawled the word “colonizer” on the sculpture’s pedestal.

There was also apparently an attempt to topple the statue of the abolitionist:

Rioters in Philly deface a statue of Matthias Baldwin, an early abolitionist who fought against slavery 30 years before it ended. pic.twitter.com/1HKrDusPBh

Antifa defaced the statue to Matthias Baldwin in Philadelphia with the words "COLONIZER" and "MURDERER." Baldwin fought against slavery, fought for black voting rights, and built schools for black children. pic.twitter.com/9RMksuRkHP

Baldwin, born in 1795, moved to Philadelphia from his birthplace of Elizabethtown, New Jersey, at 16 years old. Originally trained as a jeweler, he went on to become a manufacturer and inventor, starting his own company, Baldwin Locomotive Works.

The 19th century entrepreneur, whose plant built more than 1,500 locomotives, not only argued against slavery and for the right of black Americans to vote, but also used his own, personal income to pay for the education of black children.

Faithwire: Here’s a List of This Week’s Cancel Culture Targets

“He hired blacks in his shops when that was not the norm,” said Joe Walsh, a member of the Friends of Matthias Baldwin Park, in an email to National Review. “He was BLM [Black Lives Matter] before there was a slogan.”

‘The irony of vandalizing a monument to those who died to end slavery is lost on the morons who don’t know their history,” he added.

It’s unclear who exactly is responsible for the destruction of the Baldwin statue.

Similarly, rioters defaced a monument to the 54th Union Army regiment, the first all-volunteer black regiment. The sculpture, dedicated to black soldiers, is located in Boston.

Peaceful protest on #BostonCommon demanding racial justice. Hard to see legitimate protest turn destructive #Shaw54thRegimentMemorial. Conservators on the way to clean the grafitti on all monuments in the #threeparks. @bostonparksdept pic.twitter.com/dGzrVbFZia

The Black Lives Matter protests and violent riots were sparked by the death of George Floyd, a black man killed by former Minneapolis police officer Derek Chauvin, a white man.

Chauvin has since been charged with second-degree murder and manslaughter.