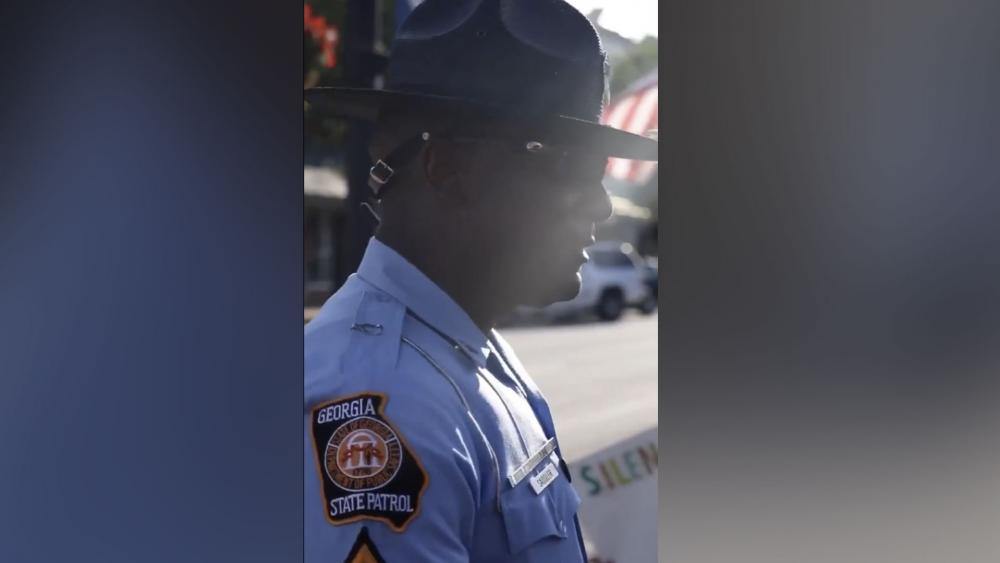 A state trooper from Georgia — who happens to be black — refused to take a knee during a Black Lives Matter protest, telling demonstrators he only kneels for God.

O’Neal Saddler was recorded during a protest in Hartwell, Georgia, where he told those gathered around him he will only take a knee “for one person: God.”

Watch how this Georgia State Trooper, identified as O’Neal Saddler, responds when he's asked to kneel by protesters...

"I only kneel for one person..."pic.twitter.com/sO04sR2bsC

“I was supposed to be out of town this weekend with my wife,” O’Neal explained. “I took off today, this weekend, but I’m out here to make sure y’all are safe. … I have much respect, but I only kneel for one person: God, God, God.”

The exchange is spreading all over social media, though it’s not clear when exactly the encounter with the state trooper took place.

Politicians, athletes, and law enforcement officers have been recorded kneeling with protesters across the country following the death of George Floyd, a black man killed by disgraced Minneapolis police officer Derek Chauvin, who held his knee on Floyd’s neck for nearly 10 minutes, until he died. Chauvin has since been charged with second-degree murder and manslaughter.

Here are the most senior Democrats in government kneeling in the Capitol, minutes before introducing sweeping police reform bill pic.twitter.com/QuXVcaLVef

New Orleans Saints quarterback Drew Brees has apologized two times since last week when he told Yahoo! Finance that he disagrees with anyone who takes a knee during the national anthem, a form of protest started in 2016 by then-San Francisco 49ers quarterback Colin Kaepernick.

Brees has since said his comments were “insensitive and completely missed the mark on the issues we are facing right now as a country.”

“They lacked awareness and any type of compassion or empathy,” he added. “Instead, those words have become divisive and hurtful and have misled people into believing that somehow I am an enemy. This could not be further from the truth, and is not an accurate reflection of my heart or my character.”

The NFL star also posted a message directly to President Donald Trump, chiding him for his position on taking a knee during the national anthem. Brees wrote to the president, “We can no longer use the flag to turn people away or distract them from the real issues that face our black communities.”

Trump, for his part, commended Brees for being “truly one of the greatest quarterbacks,” but said he should not have walked back his initial comments.

I am a big fan of Drew Brees. I think he’s truly one of the greatest quarterbacks, but he should not have taken back his original stance on honoring our magnificent American Flag. OLD GLORY is to be revered, cherished, and flown high...