'In the Name of Jesus, Racism Must Die': Racially Diverse Crowd of Christians Unites in Prayer in Lakeland 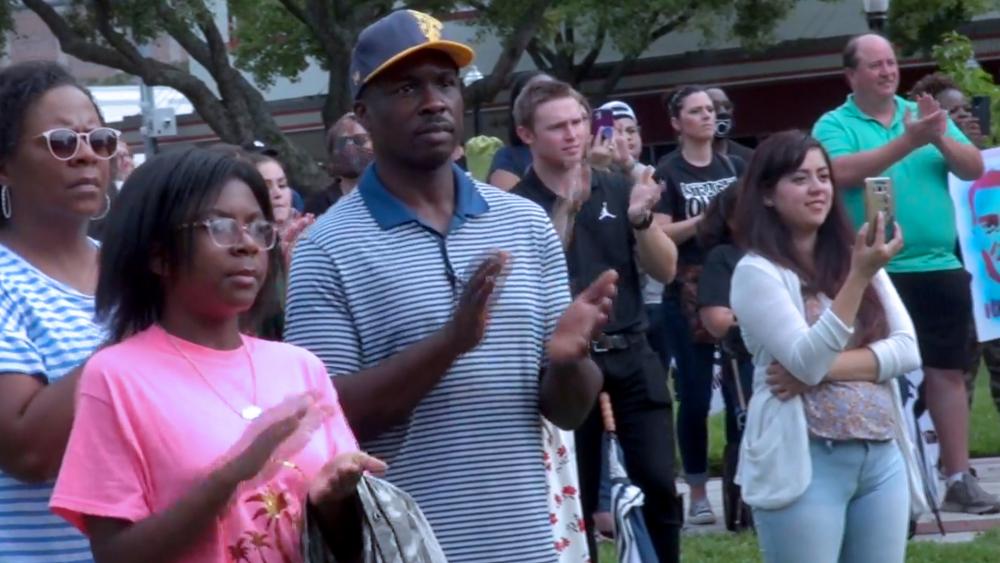 Even with all the rioting, violence, looting, and vandalism that has been unleashed in America the past few weeks, there are still positive signs of faith in action and racial unity. One of those moments came this week in Lakeland, Florida.

They called it the "One Heart Community & Faith Rally," as Lakeland, FL church and community leaders joined together with an estimated crowd of some 400 racially-diverse citizens to pray for justice and to proclaim their unity together for positive change in light of the police killing of George Floyd.

As emcee of the event, Pastor Anthony J. Brown of Macedonia Primitive Baptist Church, set the tone of the gathering, saying, "Tonight is a gathering of community leaders to express our desire for justice, unity, healing and hope. Amen. This is not a partisan event. We're coming together as Lakelanders to bless our city, to love on our community and to let the devil know we are together."

According to Lkldnow.com, dozens of pastors and one rabbi joined in the Thursday night event as Pastor Brown proclaimed "greater is He who is in us, than he who is in the world."

Prayer was the hallmark of the gathering. "In the name of Jesus, racism must die. It has to start with us in Jesus name," Pastor Jeff Scott, one of the event organizers said.

"We have to all work together to make our lives better. It doesn't matter if you're young or old or what color you are, it doesn't matter. We need to live together," Amabel Traylor who attended the event told WTSP/Ch.10 News from Tampa Bay.

UNITED IN PRAYER: A diverse crowd has gathered in #Lakeland to take a unified stance against #racisim after the death of #GeorgeFloyd. They’re raising their voices for prayer, justice, and healing. This is a multicultural event to educate and heal the community @10TampaBay pic.twitter.com/zOg1jzolKI

Polk County Sheriff Grady Judd was there to listen to people and lend his support, and to totally disavow the police behavior that led to the death of George Floyd.

As protests against the police killing of George Floyd raged into violence across the nation, Christians are joining together in towns and communities as well to peacefully proclaim their answer to healing racial wounds, namely the love of God expressed through His people.

In another example, on Sunday a multi-ethnic crowd of thousands of church people gathered in downtown Norfolk, Virginia, for a rally against racial discrimination. Reported by Global News Alliance, the call for biblical answers to the racial divide went out just a few miles from where African slaves were brought to the American mainland for the first time in 1619. Historically, true followers of Christ have been at the forefront of the movement to abolish slavery and bring racial reconciliation in America and in Great Britain.

Back in Lakeland, Christian pastors acknowledged past failures to take the lead on racial issues, but called for that kind of movement to bring lasting change today.

And then he summed up the church's mission to heal the racial divide and bring justice to all Americans. "Racism breaks the heart of God. Racism should break our hearts, too."