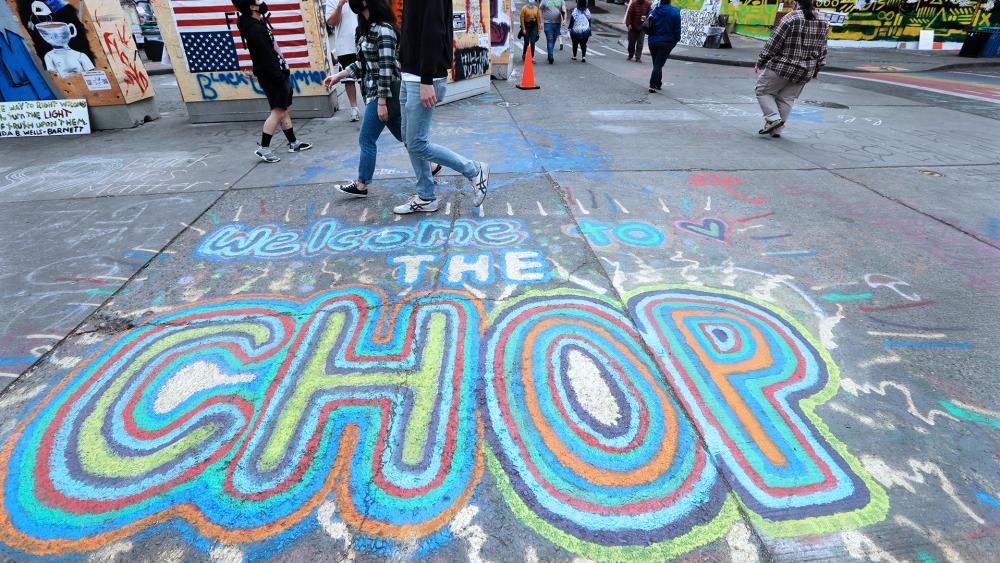 Pedestrians walk in Seattle, where streets are blocked off in what has been named the Capitol Hill Occupied Protest (CHOP) zone (AP Photo/Elaine Thompson)

Seattle police are investigating another shooting, the second in less than 48 hours, in a downtown protest zone known as "CHOP" which stands for "Capitol Hill Occupied Protest."

Seattle police tweeted that they had heard of another shooting, but were unable to confirm due to "conflicting reports."

Police investigating reported shooting inside CHOP zone. One person at HMC with gun shot wound. Hearing reports of a second shooting, but have not be able to verify at this time. Conflicting reports, will update with more information when available.

The CHOP zone spans several blocks near Cal Anderson Park and the Police Department's East Precinct on Capitol Hill. Demonstrators moved into the area after growing tensions following the death of George Floyd in Minneapolis.

Police left that site following several nights of encounters between officers and protesters during demonstrations against police brutality.

"In the coming days, I believe together we can create a Capitol Hill environment that allows for peaceful demonstrations at Cal Anderson, quality of life for residents, and take concrete steps towards a new vision for policing in our City."

But Capitol Hill residents say Durkan must do more than just release a statement.

"I would invite Mayor Durkan to spend one night in the 'CHOP' area," said one man who lives near the zone. "And she can feel for herself what it's like."

President Trump has criticized the city's Democratic mayor and the state's Democratic governor for allowing the zone to continue.

The president tweeted last week, "Radical Left Governor @JayInslee and the Mayor of Seattle are being taunted and played at a level that our great Country has never seen before. Take back your city NOW. If you don't do it, I will. This is not a game. These ugly Anarchists must be stopped IMMEDIATELY. MOVE FAST!"

Radical Left Governor @JayInslee and the Mayor of Seattle are being taunted and played at a level that our great Country has never seen before. Take back your city NOW. If you don’t do it, I will. This is not a game. These ugly Anarchists must be stopped IMMEDIATELY. MOVE FAST!