'God Had a Plan': Death of Beloved Chocolate Lab Brings Hundreds to Church 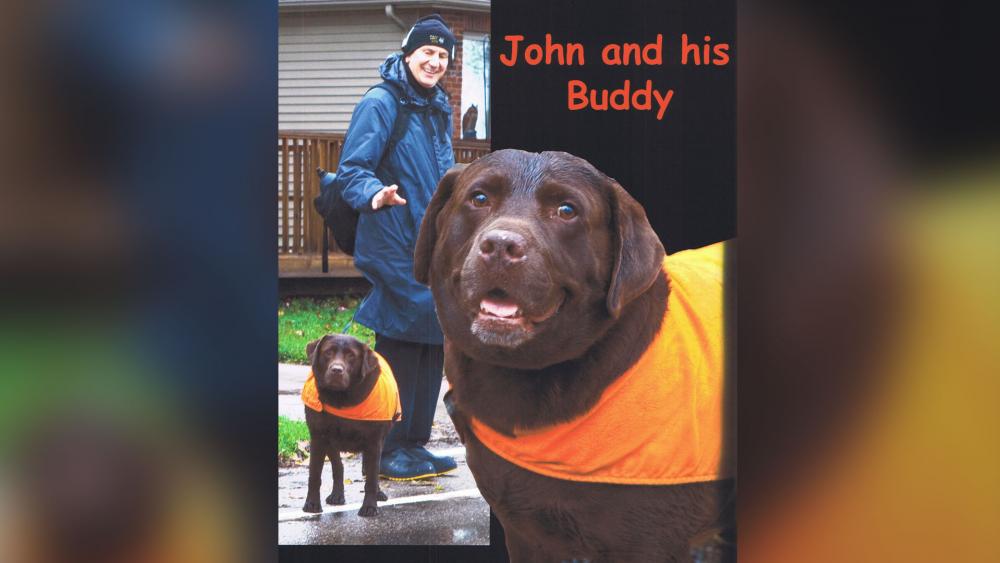 John Karakian and his chocolate Labrador retriever named Buddy, routinely walked for hours throughout the neighborhoods of Metro Detroit for nearly 12 years.

Assemblies of God reports that Karakian and his companion had become well-known around the Walled Lake and Wixom communities, especially when Buddy wore his yellow raincoat.

When Buddy passed away last March, Karakian continued walking the same routes they took together. But this time he handed out a picture of his beloved pet to neighbors, along with tickets to his church's Easter production.

Karakian started receiving phone calls, messages and over 50 sympathy cards in the mail from people showing their support and encouragement.

A police officer realized that he hadn't seen the pair out walking so he stopped by Karakian's house to ensure he was alright.

After explaining that Buddy had passed away, he asked the officer, "Do you think he's in heaven?" Then the two started having a spiritual conversation. "Next thing you know, we're talking about Jesus," Karakian explained.

On the day of the Easter service, Karakian was surprised to see so many people show up for the production at the Brightmoor Christian Church in Novi, MI.

Karakian has continued to have conversations about faith with the people he invited to his church. There were so many that he lost count but most of them confessed, "We're here for Buddy."

The day after the Easter production, Karakian felt in his heart that he wasn't done yet and to continue sending out cards about Buddy.

Karakian told CBN News, "At first, I tried to get out of doing it, but God had a plan."

He said that he tried to ignore the pull in his heart he was feeling, that people would think "he needed a psychiatrist if he began walking the same routes he and Buddy used to walk, and handing out paperwork about Buddy."

"I was trying to get out of doing it, but it didn’t take long to realize that I couldn't, and that I shouldn’t," Karakian said. The idea of telling others about Buddy remained on his heart.

Then he sensed God telling him, "You do the walking, and I'll do the talking."

For seven months, Karakian walked and prayed along the same path he traversed with Buddy. He handed out more Buddy cards to over 2,000 homes and businesses. This time, the cards included invitations to the Christmas production at the Brightmoor Christian Church.

Word over Buddy's death continued to spread across the town and Karakian came to realize that his chocolate lab had become a community icon.

Buddy loved eating lasagna at Maria's Deli in Novi so a framed picture of the lab was mounted on their wall.

"People come in and see that picture and say, 'I know that dog. I see that guy,'" Karakian said.

On the evening of the church's Christmas performance, Karakian noticed that over 200 people that he had invited showed up to the event.

In January, he received a "Thank You" card and a cake from a woman who attended the church's Christmas event. Karakian said because of Buddy, the woman and her family came back to the church again.

"If Buddy didn't pass away, none of this would have happened," Karakian said. He pointed out that all it took was a dog, a leash and "my two feet" to proclaim the gospel.

Karakian said that his friends called it a "chocolate evangelism" by Buddy the "evangelistic dog." He added that "the Holy Spirit used a chocolate lab, and the devil never knew what hit him," citing Isaiah 11:6.

During his journey without Buddy, Karakian has visited 2,200 homes.

"As soon as I said, 'My dog died,' everybody dropped their guard, were all ears and wanted to hear more," he said. "It's the wonders of the Lord."

Brightmoor's Creative Pastor, Robb Stancer described Buddy as a "four-legged friend that could melt your heart with compassion and help open your eyes to something greater."

He believes that people accepted Karakian's church invitation on account of the love between a man and his dog.

"They say they came because of the dog, but I think it's John's genuine love, and they care," Stancer said. "This little dog bridged a gap between race, religion, culture, and person because they loved Buddy. In many ways, John was just being Christ's hands extended."

The impact that Buddy and his owner had on the community still resonates today. Karakian admits that he was happy to be "Buddy's Butler" and humble to serve as one of God's messengers.

"I've been praying for the biggest revival in the history of the world, that God uses the Buddy Brigade to get the whole world saved," Karakian concluded.