'It Was Still Romantic': Couples Scale Back on Large Weddings, Get Hitched Despite Pandemic 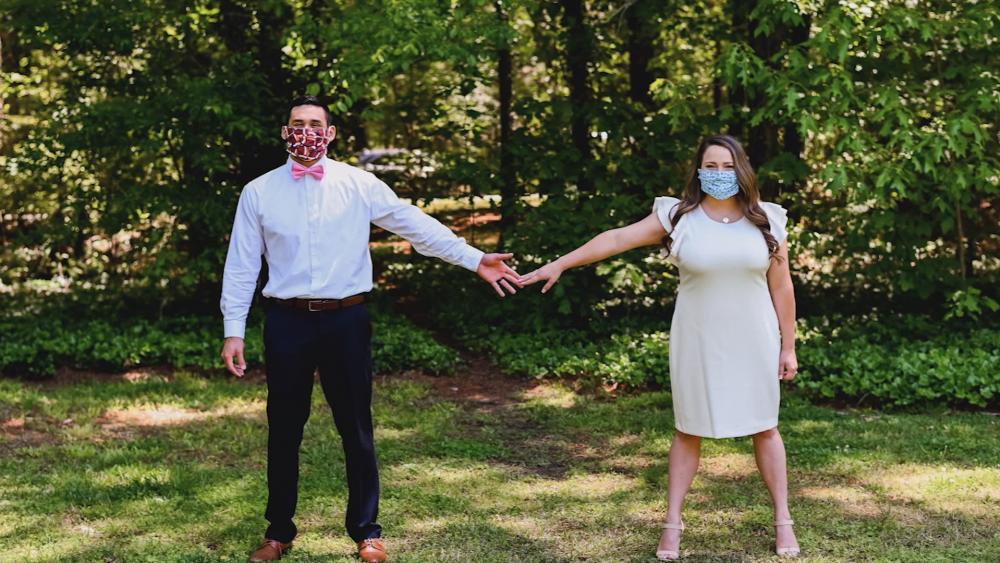 6158003849001
'It Was Still Romantic': Couples Scale Back on Large Weddings, Get Hitched Despite Pandemic

According to the wedding planning site The Knot, some 20,000 to 30,000 weddings happen each weekend in the US. Most are planned for the months of April, May, and June. This year due to Covid-19, many couples have postponed their big day while others see now as a great time to get hitched.

As a little girl, Tara Lynne Hilbert of Chesapeake Virginia dreamed of her wedding day.

Once she got engaged, she started planning, wanting every detail to be perfect.

"We had been engaged two years," Hilbert told CBN News. "We invited 260 people. We planned this wedding for two years."

Like so many couples, when the outbreak began, Tara Lynne and her fiancé Dane were forced to ditch their original plans.

"I was disappointed," Tara Lynne said. "It's so much planning that's involved in it and you're looking forward to it for so long. But after I realized there's nothing we could do about it so where can we go from here?"

Changing Both Expectations and Plans

The short answer was to stay the course. So on May 2, their planned wedding date, Tara Lynne, and Dane tied the knot in their front yard.

"It was definitely different, explained Tara Lynne. "{I} wore a nice little white dress, walked out of my house down the driveway to my future husband, and just seeing my family there, it was not as planned, but it was still romantic and intimate."

Across the country, other brides are doing the same.

"I've actually had four friends that have had to either postpone or cancel their wedding," said Tara Lynne. "Most of them are still ending up getting married on the day that they were planning and then having a celebration later on."

Candice Rauch specializes in making brides beautiful for their special day. As a professional makeup artist, she knows first-hand the impact on the normally bustling beauty industry.

"Around about this time I would be so busy with clients, weddings, graduations, prom, you name it," Rauch said in an interview with CBN News.

This season has been unprecedented.

"I have postponed 29 brides from March until August," Rauch said.

As the Coronavirus unfolded, Rebekkah and Patrick Manning decided against waiting.

They got engaged April 19, but instead of marrying later this year, they decided to tie the knot a week later.

"We thought about the second wave or whatever and how long it would be before we could get actually married and we really didn't want to do that," Patrick told CBN News.

The Up Side of a Scaled-Back Wedding: Saving Money

Standing on a dock in the backyard of Rebekkah's parents' home, they exchanged vows in front of family and friends while others watched online.

"We had people Zooming in and watch it," said Rebekkah.

Despite not having the wedding they always wanted, the couple admits that marrying sooner rather than later, kept costs at a minimum.

"We didn't spend anything on our wedding," explained Rebekkah. "I spent $15 and I got my dress from a stranger on Facebook Marketplace. We didn't spend any money because of the generosity of our friends and family."

"Instead of a flower girl we had a little girl with a basket walking around with hand sanitizer," said Patrick.

Patrick and Rebekkah also see the quicker timeline as perfect.

As for Tara Lynne and Dane, they still want a celebration and have rescheduled their wedding venue and honeymoon for next year. For now, the newlyweds are enjoying the simple pleasures of marriage.

"We got new carpet and we built a coffee table together," said Tara Lynne. So, we're going to have our honeymoon next year in St. Lucia. We were both off from work so just hanging out together."