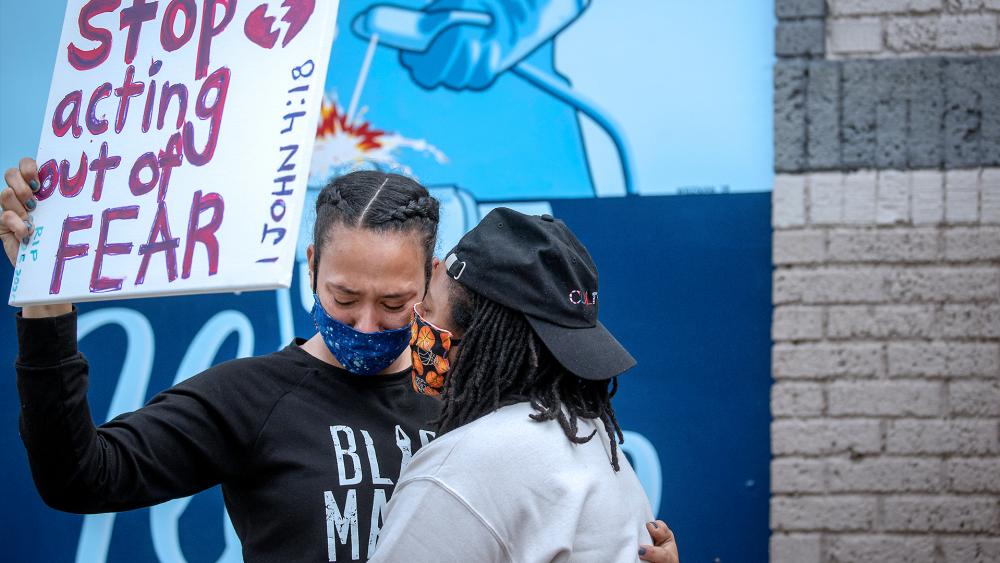 The FBI and Minnesota agents are investigating the death of a black man in Minneapolis police custody (Elizabeth Flores/Star Tribune via AP)
6159897949001
Police Fire Tear Gas, Flash Grenades at Protestors After Death of Unarmed Black Man in Minnesota

ABOVE: Dr. Charles Steele, national president and CEO of the Southern Christian Leadership Conference appeared on Wednesday's edition of CBN News's Faith Nation to talk about the progress of the Civil Rights Movement, and the progress for justice after seeing news accounts of what happened to George Floyd, Ahmaud Arbery, and Breonna Taylor. Faith Nation is seen weeknights on the CBN News Channel. For a programming schedule, click here.

Protests erupted overnight in Minneapolis after the death of a black man who was in police custody and in public view. The incident was captured on a video recording.

While some demonstrators peacefully marched on the streets, thousands more deadlocked with police in a standoff where officers used tear gas to hold off the crowds.

It’s morning and we need some answers from @MayorFrey about the use of tear gas, flash bombs and rubber bullets by police in Minneapolis last night. Yesterday we welcomed clear talk & swift action in response to the video of the killing of #GeorgeFloyd. We need the same today. https://t.co/G3gyjb5xRx

Four police officers have been fired just one day after the death of George Floyd.

Minneapolis Major Jacob Frey tweeted, "Four responding MPD officers involved in the death of George Floyd have been terminated. This is the right call."

Four responding MPD officers involved in the death of George Floyd have been terminated.
This is the right call.

Video from a bystander taken outside a south Minneapolis grocery store on Monday night showed a white officer pressing his knee on Floyd's neck.

While handcuffed, Floyd pleaded that he couldn't breathe and finally stopped moving.

He was taken by ambulance to a hospital, where he was pronounced dead.

Police say Floyd was unarmed but was suspected of trying to pass a forged check. They said he was under the influence of alcohol or drugs and resisted officers.

"He begged you for his life," one protestor said to KTRK-TV. "If you can stand there and listen to another human being beg you for their life, and you continue to do harm to them, you're inhumane."

The demonstration started Tuesday afternoon, where protestors flocked to the same intersection where Floyd was killed.

Those who organized the rally intended to keep it peaceful, but anger grew as protestors voiced their frustration. Chants of "I can't breathe," and "It could've been me," were heard throughout the streets.

"We're here to let them know this can't be tolerated, there will be severe consequences if they continue to kill us. This will not go on another day," a demonstrator said.

Protestors threw rocks and water bottles at police officers who started firing tear gas and flash grenades at the crowds.

In the evening, protestors marched toward the 3rd Precinct where it is presumed that the four officers worked. Other rioters started vandalizing the building, breaking windows and spray painting police cruisers.

Carmen Means, a pastor in Minneapolis said there might be more to the circumstance, but the restraint used by police is unsupported.

"We understand that there may be other factors that are involved... but bottom line, the restrictions, the force that was used was unreasonable," Means said.

The Federal Bureau of Investigation and members of Minnesota Law Enforcement are investigating Floyd's death.