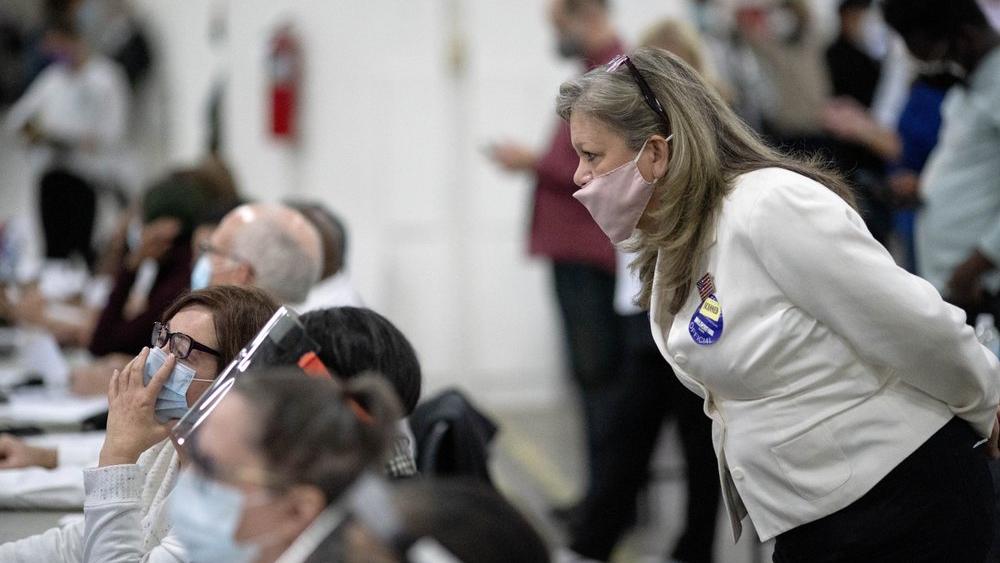 A Republican election challenger at right watches over election inspectors as they examine a ballots. (AP Photo/David Goldman, File)

Growing contention over the post-election challenges has taken a grievous turn as people associated with the Republican election lawsuits are now receiving a barrage of harassment and intimidation.

The strong criticism, which some have labeled as abusive, targets attorneys representing the Trump campaign, according to Gatestone Institute.

Dhillon tweeted on Friday, "A Kirkland & Ellis associate left a hateful/harassing voice message last week for the lead lawyer for the Trump campaign - campaign lawyer asked for sanctions but so far the court has done nothing on this. The Trump lawyer has had death threats, courtesy Lincoln Project doxing."

A Kirkland & Ellis associate left a hateful/harassing voice message last week for the lead lawyer for the Trump campaign — campaign lawyer asked for sanctions but so far the court has done nothing on this. The Trump lawyer has had death threats, courtesy Lincoln Project doxing. https://t.co/92tflAPExS

Gatestone Institute reported that The Lincoln Project, a group of Republicans who are dedicated to preventing Trump's second presidential term, devised a "list" with the names of people who helped President Trump and Vice President Pence.

The group launched a campaign against the law firms Jones Day and Porter Wright, by encouraging people to shame the attorneys for representing the Republican Party.

1. Created a LinkedIn account.
2. Message someone who works at @JonesDay or @PorterWright.
3. Ask them how they can work for an organization trying to overturn the will of the American people. https://t.co/Q3NR5xM4tjhttps://t.co/65DOcAUHYb

And the criticism has materialized with Republican canvassers, including GOP members William Hartmann and Monica Palmer who serve on the Board of Canvassers in Wayne County, Michigan.

Palmer revealed that she was "chided" by coworkers for voting to not certify. She added that after the vote, "dozens of people" made disparaging remarks against her and members of her family.

"The comments made accusations of racism and threatened me and members of my family," she stated.

Hartmann declared that his vote against certification was followed by "public derision" from Democrat colleagues. "This conduct included specious claims that I was racially motivated in my decision," he said.

Palmer and Hartmann allege they felt pressured to change their vote.

Additionally, Wayne County Board Canvasser Democrat Ned Staebler berated the both of them for refusing to agree to certify the votes there.

"I just want to let you know that the Trump stink, the stain of racism that you have covered yourself in, is going to follow you throughout history," Staebler raged. "Just know when you try to sleep tonight that millions of people around the world on Twitter know the names William Hartmann and Monica Palmer as two people completely racist and without an understanding of what integrity means or a shred of human decency."

The Board of State Canvassers is due to meet on Monday and the certification process will be held next week.