The Pilgrims Brought the Values that Shaped Freedom-Loving America 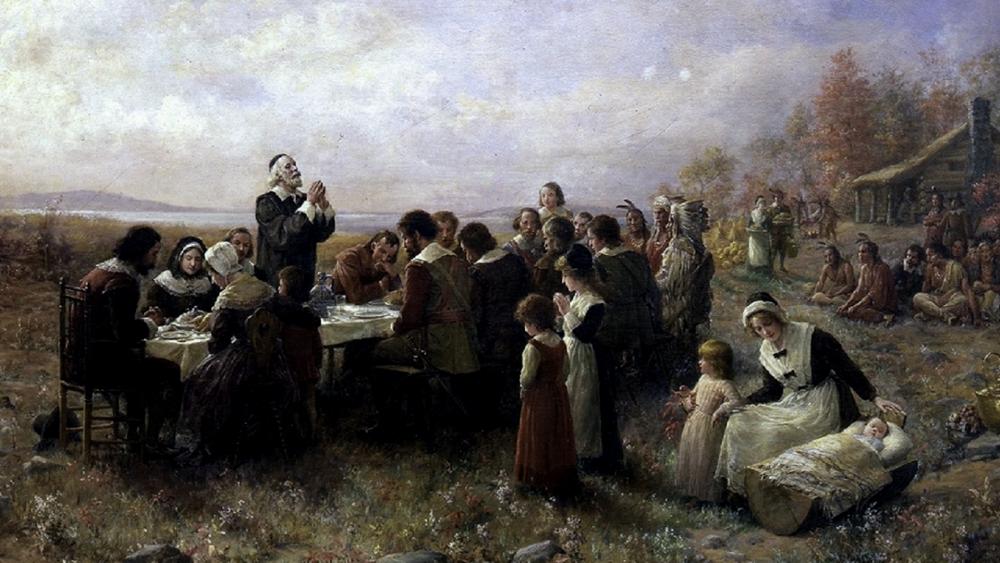 6212265102001
The Pilgrims Brought the Values that Shaped Freedom-Loving America

The Pilgrims didn't just give America Thanksgiving celebrations. They believed religious freedom and liberty were worth dying for. They made the Bible America's most-read guide to life. And the Pilgrims' covenant with God and man in 1620 and the form of self-rule they pioneered would eventually shape America's Constitution and the entire government.

"2020 is the 400th anniversary of the founding of Plymouth. I think that's a huge milestone. It's a great milestone in human history," said Christian historian Jerry Newcombe, producer of the documentary, "The Pilgrims."

"The Pilgrims" looks at how those 51 surviving Pilgrims not only lived through their first brutal Massachusetts winter but went on to influence their future nation.

In Newcombe's documentary, Pilgrim reenactor Leo Martin, founder of Plymouth's Jenney Museum, asks, "Did you know today that 10 percent of the population of the United States are Mayflower descendants? 30 million people from 51."

"The Pilgrims founded America for all intents and purposes," argues Prager U founder Dennis Prager in the documentary.

In those days, England demanded all its citizens belong to the Church of England and conform to its beliefs…or face harsh punishment.

They Wanted to Obey the Bible, Not the Church of England

"You will worship as they say you worship," Plymouth Rock Foundation founder Paul Jehle told Newcombe. "And so to do this illegally meant you could be arrested. If you continued, you could be put to death. In fact, some of the friends of the Pilgrims were killed in the Tower of London."

So the Pilgrims fled.

"They just wanted to worship Jesus and the purity of the Gospel, and the king wouldn't let them do that. He was ruling over their conscience. That's why they fled," Newcombe explained to CBN News.

They'd come to believe in radical ideas they found in the Bible: like they had rights given by God, and that He wanted them to be free, to govern themselves from within.

The Most Precious Cargo was the Ideas

"The Mayflower was a cargo ship. But the most precious cargo that was carried across the Atlantic were the ideas in the hearts of the Pilgrims that were drawn from the Bible," Jehle says in "The Pilgrims."

He continues, "You see the seeds of liberty – both religious liberty and civil liberty – and the idea of self-government and rule from within, all these are within that body of Pilgrims."

And after unexpected winds blew them off-course away from any governing authority, they made a covenant between God and man for a new form of government.

"The Pilgrims gave us the Mayflower Compact, which was an agreement for self-government under God, which really was the first step in the creation ultimately of the Declaration of Independence and of the US Constitution," Newcombe asserted.

In "The Pilgrims," William Federer, author of "America's God & Country," says of the Mayflower Compact, "It was a polarity change in world government. Instead of top-down – rule by these kings who kept getting more and more powerful –  it's bottom-up. It's the people themselves deciding what laws they're going to pass and agreeing to submit to them."

It made freedom the cornerstone of America, as shown by the words on the Liberty Bell.

Newcombe explained, "The Liberty Bell has only one thing on it other than who made it, and that is a Bible verse. It says 'proclaim liberty throughout the land and to all the inhabitants thereof.' Leviticus 25, verse 10."

Some students are wrongly taught the Pilgrims stole from the Indians and treated them horribly. The record shows the opposite was true.

"The Pilgrims provided a good model for later settlers, and I wish other settlers had followed their example," Newcombe said. "For example, how they treated the Indians. The Pilgrims got along very well with the native Americans. They were very respectful towards them. They treated them well. They had a treaty of peace that lasted probably longer than just about any treaty that white Americans had with the native Americans."

The Pilgrims did take some buried corn in freezing cold New England as they first arrived at Cape Cod, but only because they were literally starving.

Newcombe pointed out, "And they even said when they later came into contact with the native Americans, 'find out whose corn that is so that we may repay them.'"

They didn't steal land in Plymouth as some detractors have taught. It had been abandoned by the Indians.

"There was a plague that occurred three years before the voyage of the Mayflower. And it wiped out about 95 percent of the Indians in that particular region," Newcombe said. It caused them to flee that land.

"They wouldn't come back on it because of the plague. The Pilgrims took land nobody wanted," Martin says in the documentary.

And the Pilgrims showed the Indians they'd treat them as equals.

Newcombe recalled, "There was a situation where a Pilgrim killed an Indian. The Pilgrim was put on trial and the Indians expected 'this is just going to be a mockery, a show trial. And he's going to be found innocent. After all, all he did was kill an Indian.' And that's not what happened. They found the Pilgrim guilty and he was hanged for murder. Now the Indians knew they could trust the Pilgrims."

Some Things Are Worth Dying For

The Pilgrims taught future Americans a God-blessed cause was something worth sacrificing and suffering for, even dying for. They showed that when they turned down the offer from the Mayflower's Captain Christopher Jones to rescue them from the first deadly winter they faced.

"Half of their number had died. This was not what they'd signed up for at all. And Jones says 'anybody who wants to come back to England with me, I will take them.' Not one of them went," William Wrestling Brewster, a descendant of Pilgrim elder William Brewster, recalls in Newcombe's documentary.

The Pilgrims made living by the Bible and loving it a very American habit.

"The one key book was the Bible," Newcombe stated of these colonists. "And the education that they experienced was based on the Bible. The Bible, in fact, was the chief textbook in what became the United States of America. The Bible was the key book for the first 200 years."

'Knew the Bible Down to Their Fingertips'

Newcombe continued, "Dr. Donald Lutz at the University of Houston said that the Founding Fathers, even the ones who weren't necessarily committed Christians, 'they knew the Bible down to their fingertips.'"

Children of the Enlightenment, the Founding Fathers brought America an enlightened revolution.

"And above all, they quoted the Bible -- four more times than they quoted any human author," Newcombe asserted.

It gave them the go-ahead to throw off Britain's ungodly tyranny.

"They recognized that there is a higher law: the law of God and that God presides over the affairs of nations," law professor and author Lt. Col. John Eidsmoe says in "The Pilgrims."

Newcombe explained what the Pilgrims learned in the Bible and from such influential teachers as John Calvin was that, "You are to obey the lawful authorities, but if the lawful authorities take too much authority unto themselves and they violate God's laws, then obedience to God means resistance to tyrants."

So the Pilgrims who had fled England for their freedom laid the foundations that would shape America and eventually its freedom.

To buy your own DVD of the documentary, "The Pilgrims," click HERE.