Archbishop Leads Exorcism of Portland to Battle 'the Evil One' After Months of Violence, Twitter Agrees: 'Demonic Without Doubt' 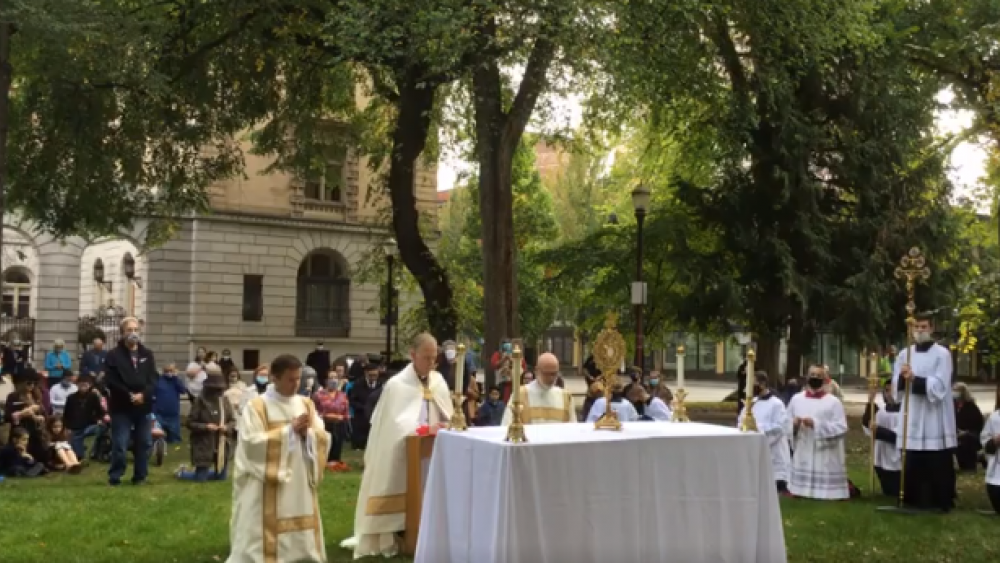 Portland's Archbishop Alexander Sample recently conducted an exorcism over the city, hoping to bring peace and unity to the area after months of rioting and protesting.

The archbishop prayed before the Blessed Sacrament at the Cathedral of the Immaculate Conception on Oct. 17, then led a procession through downtown's North Park Blocks, Catholic News Agency reports.

"There is no better time than in the wake of civil unrest and the eve of the elections to come together in prayer, especially here in Portland," Sample said. "The Catholic Church takes the promotion of unity, and accordingly peace, as belonging to the innermost nature of the Church. For this reason, the Church fosters solidarity among peoples, and calls peoples and nations to sacrifices of advantages of power and wealth for the sake of solidarity of the human family."

He added that his efforts were not meant to suggest that Portland is possessed, rather the exorcism was intended to bring God's healing over the city.

"I wasn't trying to suggest that I think the city of Portland is possessed. It's not that at all. It's just a prayer of blessing prayed by the clergy, especially a bishop over a community just asking that all the influences of the Evil One be driven away," Sample said.

But some are saying that a dark, evil presence has cast a shadow over Portland.

One reporter, who captured much of the Portland unrest on camera, said, "Many of the people I've seen engaging in violence in Portland can only be described as wicked."

I'm not religious but many of the people I've seen engaging in violence in Portland can only be described as wicked:

Other social media users agree that there's a satanic element lingering within the area.

One user tweeted, "What's going on is demonic without a doubt."

Another user said, "Demonic possession seems to be an accurate description of what causes these antifa people to do some of the things they do."

And it's not over yet. Reporter Andy Ngo warned that the Antifa organizers in Portland have already announced their post-election plans to hurt local businesses.

Here is the flyer for antifa's post-election activities in both Portland and Salem. #PortlandRiots #antifa https://t.co/5jpsjVs1mL pic.twitter.com/bMQxxhHmZE