Police Forces and Surplus Military Gear: Does It Send the Wrong Message to the Public? 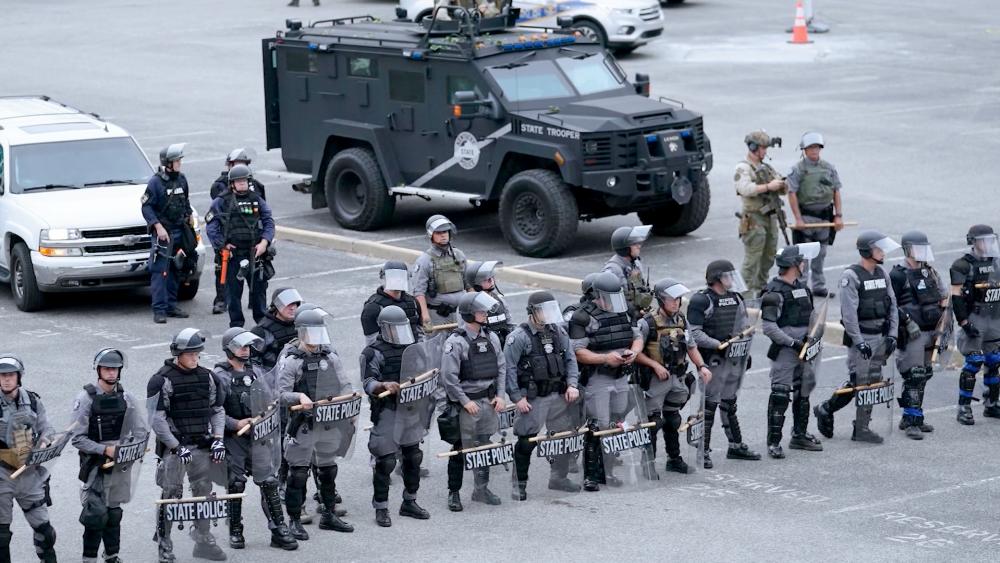 6196569782001
Police Forces and Surplus Military Gear: Does It Send the Wrong Message to the Public?

Law enforcement is under the microscope more than ever. 2020 has been a year of protests over controversial deaths and questions of police brutality. This has led to calls for a closer look at policing including what some call a force that's over militarized. And some say it can be traced back to one tragic day in American history, September 11, 2001.

9/11 changed our country almost immediately. America felt the need for greater protection leading to the creation of an entire department: Homeland Security. Federal money also flowed to local police departments bringing with it increased military equipment, expertise, and training. While the goal was safety and security, some say it's had the opposite effect.

The Virginia Beach Sheriff's office got a mine-resistant ambush protection vehicle, or MRAP, courtesy of the Pentagon. I happened through the 1033 program run by the Department of Defense.

"It's fully armored all the way around so this can get deputies close to the threat without risking their lives," said Todd Moissett, a sergeant with the sheriff's office.

"There's no way we could have afforded to buy this if we had to pay for it," Moissett said.

Critics say it's the kind of equipment that's helped transform local police and sheriff's departments into a militarized force. This simmering concern reached a fever pitch during demonstrations following the 2014 police-involved shooting death of Michael Brown in Ferguson, Missouri. Fast forward to 2020 with its widespread protests and resulting violence. Some say the response from police has been no less militaristic.

Jim Burch is president of the National Police Foundation.

"Those are things maybe we should think through," Burch said.

"In the past, this program has provided police agencies with military equipment that I think some would consider to be offensive. And I don't say that in the sense of 'I'm offended,' rather as in being used for offensive purposes as opposed to defensive.

"It strikes people that these militarized encounters mainly occur in black and brown communities and that this is an unfair use of police force," said Catherine Lutz.

She leads a project at Brown University researching the cost of almost 20 years of war since 9/11. Her team found part of that cost is a negative effect on policing in the name of securing our streets.

"As the wars wound down in Iraq and Afghanistan, that equipment was no longer needed there but it was as a result of a heavy amount of spending," Lutz said. "Suddenly all of that equipment, tremendous amounts of equipment, became available to police departments. The military-style vehicles on the streets have eroded the public confidence that the police are there to protect them as opposed to protecting themselves.

Consider these numbers from the university's research: before 9/11, $27 million in military material went to local law enforcement. After 9/11, that number catapulted by nearly 6000 percent to $1.6 billion.

"I think that it's much about nothing," said Virginia Beach Sheriff Ken Stolle.

He says protecting his deputies is a high priority.

"My position is as long as police officers and law enforcement officers get shot at and killed, I'm going to try to provide the best protection I can provide them to do their jobs," Stolle said.

"The notion that police need to be protected from the population is contradicted by those numbers," Lutz said.

The items coming from the DOD are not all offensive. The Virginia Beach Sheriff's Office has also acquired cargo trucks, passenger vehicles, generators, storage units, and backpacks.

"We just completed an analysis of the last 12 months of data from that program and it looks like most of what's being provided today are things like boots goggles, gloves, face masks to deal with the pandemic," Burch said. "Clothing items, some backpacks, generators, lawnmowers, those kinds of things that are saving states hundreds of millions of dollars. Now, this does not mean departments are not receiving all-terrain vehicles or mine-resistant vehicles, assault vehicles, and sometimes rifles."

"We've not tried to get any M-16s, fully automatic weapons, bazookas, or anything like that," Stolle said. "I think that's crazy!"

"Every single thing down to a paper clip we have to provide a justification of how it's going to fulfill our law enforcement community support mission," Moissett said.

Researchers at Brown say police militarization is not just about the equipment, it's also about how much surveillance occurs in American communities, surveillance that didn't happen before 9/11. Though law enforcement officials may claim it's kept Americans safer, their study finds no proof of that.