'How Dare You Fly the American Flag!' Protesters Invade Neighborhoods With Terroristic Demands and Threats 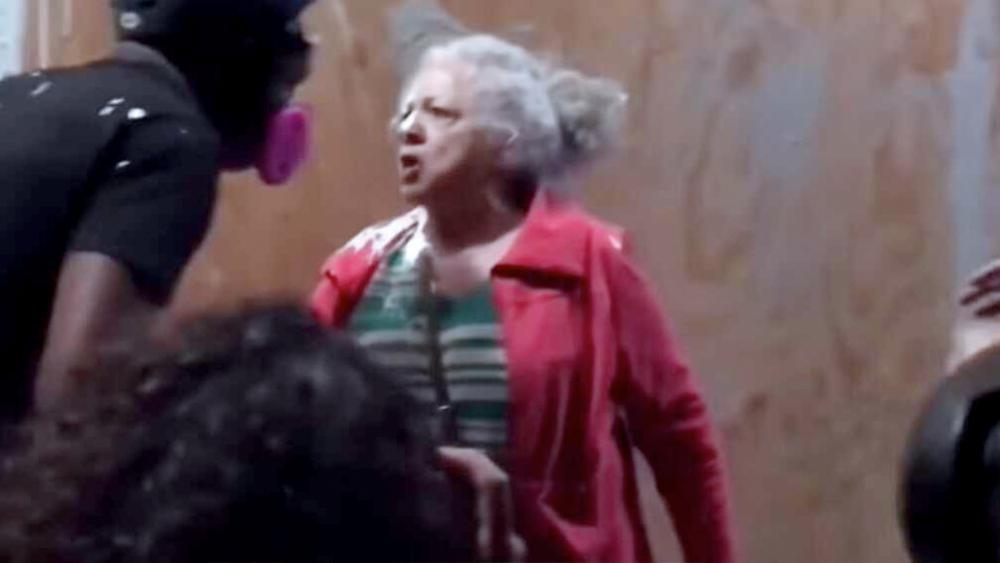 Terrance Moses runs a non-profit group that tries to help homeless people. He’s also a military veteran who has served our country and was deeply troubled when an angry protest targeted his neighborhood. Protesters threatened to burn his neighbor’s house down because of an American flag flying on the property.

The protesters who harassed Moses and his neighbors were mentioned in a New York Times article that covered the new, disturbing trend among BLM protests: invade neighborhoods.

“It went from a peaceful march, calling out the names, to all of a sudden, bang, ‘How dare you fly the American flag?’” said Mr. Moses, who is Black and runs a nonprofit group in the Portland, Ore., area. “They said take it down. They wouldn’t leave. They said they’re going to come back and burn the house down.”

Mr. Moses and others blocked the demonstrators and told them to leave. “We don’t go around terrorizing folks to try and force them to do something they don’t want to do,” said Mr. Moses, whose nonprofit group provides support for local homeless people. “I’m a veteran. I’m for these liberties.”

While it’s admirable the Times sought to cover this alarming trend, the way the chose to spin it was “austere scholar” level cringeworthy. Here’s what they said (emphasis mine):

Nearly four months after the killing of George Floyd by the Minneapolis police, some protesters against police brutality are taking a more confrontational — and personal — approach. The marches in Portland are increasingly moving to residential and largely white neighborhoods, where demonstrators with bullhorns shout for people to come “out of your house and into the street” and demonstrate their support.

These more aggressive protests target ordinary people going about their lives, especially those who decline to demonstrate allegiance to the cause. That includes a diner in Washington who refused to raise her fist to show support for Black Lives Matter, or, in several cities, confused drivers who happened upon the protests.

A more confrontational and personal approach is definitely one way to describe marching into neighborhoods, restaurants, roads, etc, and making demands and threats. These threats might be easier to shrug off as hyped up protest bravado — if it weren’t for the fact that protesters have unleashed $1-2 BILLION in damages via rioting and looting.

It’s a very concerning trend, one that seems to have given up on all aspects of human decency and instead relies on intimidation, fear, violence, and anger. Here are just a few of the coercive, intimidation, and bullying tactics being used by the protesters to force an agreement out of innocent bystanders (WARNING: some harsh language can be heard in some of the below videos)

Put your fist up and say Black Lives Matter, or else. pic.twitter.com/xjY98Fv13r

These two old women were splattered with paint after confronting violent protesters lighting fires and generally destroying their neighborhood.

The Times frets these new tactics are dividing Black Lives Matter supporters who are concerned that being confrontational will “antagonize” people who would be otherwise receptive to the message. With the aforementioned billions in protest damages, cities on fire call to abolish the police, bullying like scenes as we saw from Jimmy Kimmel this week in which he sheepishly barks on command,

There was a time when behavior such as this was routinely and swiftly condemned. Today, however, we are getting an unfortunate and very real abject lesson in what happens when attempting to appease terrorists: give an inch, they take a mile. Clearly, protesters are feeling emboldened with a righteous indignation — given to them by politicians and members of the media who sugar coat what’s happening as “mostly peaceful” and even honorable.

Threatening, bullying, and intimidating people is not the unifying message of “equality and justice” being marketed by many in the name of anti-racism. These type of terroristic demands and threats will only deepen the divide, create more animosity, and more stressful and violent times ahead.

Be praying for our country, that people would see the error in tactics such as this, and pursue a more Godly course of reconciliation — one that is rich in mercy, grace, forgiveness, and true kindness.