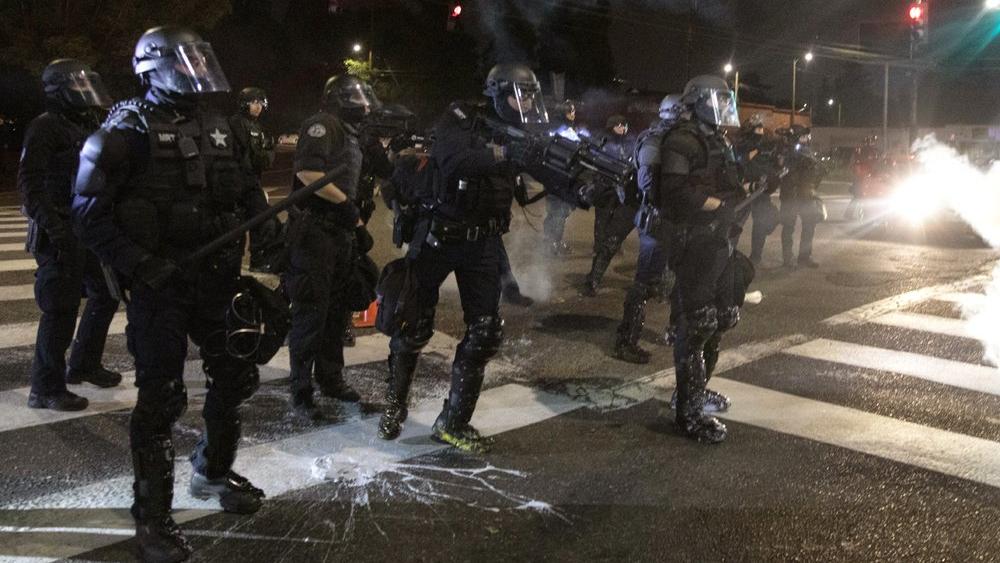 In a series of tweets, the police department stated that people in the crowd were "engaging in tumultuous and violent conduct" and "creating a grave risk of causing public alarm."

Portland Police note that persons on Southeast Stark are engaging in tumultuous and violent conduct thereby intentionally or recklessly creating a grave risk of causing public alarm This is a riot. Police are giving announcements to disperse People are throwing Molotov cocktails.

One video shared on social media shows firebombs being thrown in the direction of officers, creating a massive fireball and smoke.

Hundreds of protesters are out in Portland tonight for the 100th night of demonstrations. Police have blocked the road. We are already seeing molotov cocktails from protesters and riot-control munitions from police. pic.twitter.com/O6b1fC0OHq

According to KATU-TV, a crowd gathered at Ventura Park around 7 p.m. with plans to march down to the Portland Police east precinct.

Police used tear gas to try to block more than 400 people from reaching the precinct.

In another video, a demonstrator is seen struggling after his feet catch on fire.

Here's another angle showing one of the molotov cocktails leaving one of the people in tonight's Portland crowd with their legs on fire. via @BGOnTheScenepic.twitter.com/b3OF3reqVE

Saturday marked Portland’s 100th night of protests since the May 25 death of George Floyd in Minnesota. Some protesters say there is still more to fight for and they will continue coming to the streets until there is a change.

Tupac Leahy, a Black man from Portland, told the Associated Press that he's been to at least 70 demonstrations.

Leahy explained that he wants the local police budget reduced and for funds to be redirected toward community needs. He believes the protests will persist for quite a while.

"I think it's going to keep going on until the election," he said. "I don't see it slowing down."

Chelsea Jordan of Portland said, "I feel the people here have a lot of heart and a lot of commitment."

Jordan was spray painting yellow cutouts to identify the names of Black people who were killed by police.

"I want to keep at it until the full abandonment of the police, so I think it's going to be a long fight," she said.

In a statement released Sunday morning by Portland Police, more than 50 people were arrested during the riot.